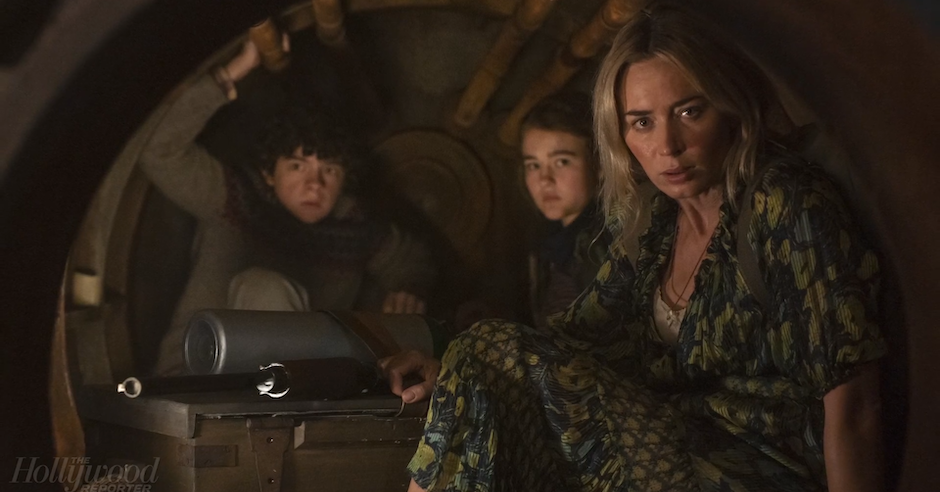 A Quiet Place Part II picks up from the shocking events of the 2018 horror film directed by John Krasinski. Following the death of Lee, the Abbott family move through the land still decimated by the blind monsters from the first film, using their newly discovered defence against the monsters – amplifying the feedback from Regan’s hearing implant as shown in the first film.

A Quiet Place Part II had a high bar to hit following the unique, powerful original was both a commercial and critical success. With leading man John Krasinski’s character killed off, it was always going to be difficult to reach the peaks of the original. Adding in the fact that the film was delayed over a year due to the Covid pandemic and with this film being one of the first releases in cinemas in some time, the pressure was on. However, A Quiet Place Part II manages to keep to the high standard set by the original and build on the interesting world and concept introduced in 2018. It is a rare example of a sequel doing what was done right first time round whilst adding further layers to expand on the lore without taking anything away – a method often referred to as the Aliens approach, and that comparison shows just how good this film is.

Many films would struggle to do well after killing off its leading man. Thankfully, the always brilliant Cillian Murphy (Peaky Blinders, 28 Days Later, Inception) is on hand to carry the film forwards with the still excellent surviving members of the cast. He steps into the shoes vacated by John Krasinski and plays the character of Emmett to perfection. A weary, hardened survivor on the cusp of giving up on the world, he is woken from his grief and pessimism by the hope found in the Abbott family as they fight to survive with the new addition to their team. Once again it is Millicent Simmonds who shines as Regan, the hopeful deaf daughter with a will to survive. In A Quiet Place Part II, she takes on more of a leading role and it is the relationship between her and Emmett that is at the heart of the film and allows the audience to open their eyes to an expanding world where even the slightest sound could mean death. Her stubborn determination to survive and to help others is what helps Emmett’s character to grow and it is a joy to watch every step of the way – even as the film kept my blood pressure high with the familiar constant tension and expectation of horror in almost every shot.

As I mentioned with the first film, A Quiet Place Part II is a masterclass in the use of sound and direction. Every shot is carefully structured and the use of sound should be an example in every class for students of film. The flashback scene recalling the events of the first day of the attack is one of the best scenes I have watched in a cinema and the way it jumps from Lee to Regan, showing the different ways they visualize the attack and the way hearing effects their behaviour is stunning and proves that Krasinski more than a trusted pair of hands behind the camera. Again, there are elements of Spielberg and Hitchcock in the way the movie is directed but never in a derivative way. There are also a couple of car chase scenes with high-octane action to add to the simmering building of tension throughout the film and this adds a different element to film when compared to A Quiet Place.

A Quiet Place Part II has just as much heart, if not more, than the original. It is a beautiful film with death, violence, true jump-out-of-your-seat scares and all the suspense and tension you would expect if you have seen the first one. The excellent cast are all on top form and make you cheer for them as they fight to survive in such a difficult world. Krasinski has crafted another pitch-perfect film and with that abrupt ending, I hope that there will be one more to complete this trilogy.

Aaron S. Jones is the author of Flames of Rebellion, the first part of The Broken Gods trilogy. He is Head of English