An Interview with Anna Mocikat 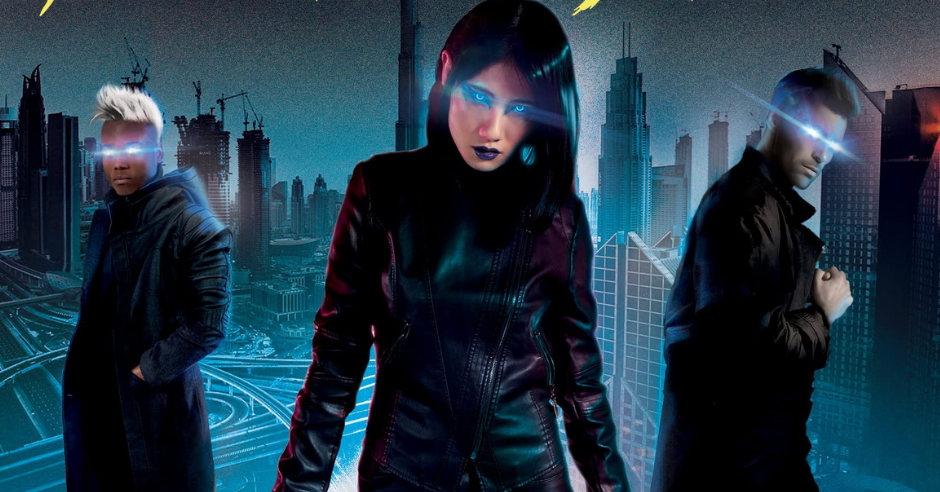 I am pleased to say that we have another author interview with indie cyberpunk maven, Anna M0cikat. The author of Behind Blue Eyes and its sequel is here to talk about her recent work! 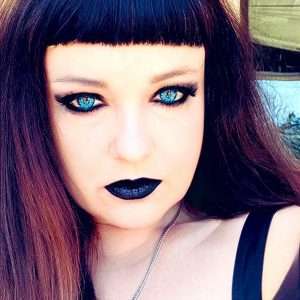 GdM: What can you tell us about Behind Blue Eyes?

Behind Blue Eyes is a cyberpunk book series, currently consisting of two books with the third scheduled for March 2022. It’s a dark, action-driven story about a killer cyborg who realizes that everything she has been fed her entire life was a lie and decides to take a stand against the system and her creators.

GdM: Tell us about your protagonist, Nephilim.

Nephilim is an elite soldier, the perfect human-machine hybrid, and part of a killer squad called Guardian Angels. They have been created to keep Olympias safe from enemies from outside and within. From early childhood, Nephilim has been indoctrinated into believing Olympias was the perfect society and that she was fighting a righteous cause – which, of course, is a lie. After a glitch that separates her from the grid, she begins thinking for herself which ultimately leads to her rebellion. Nephilim isn’t a young girl looking for her destiny, she’s a badass killer, a weapon. Yet she’s also so much more than that.

GdM: What draws you to cyberpunk? Why choose to write in this genre?

I’ve been in love with Cyberpunk since I saw Ghost in the Shell in the late 90s for the first time. To this day it’s my favorite movie and I had the iconic poster with the nude Major Motoko with all the wires sticking out of her hanging in my bedroom for many years… somehow, I lost it during my last move, and I think it’s about time to get a new one, haha. Ever since I wanted to write a cyberpunk novel myself and I had the idea to Behind Blue Eyes for many years but somehow got distracted by other projects. Now that I finally started writing in the genre, I don’t think I will ever let go of it again.

GdM: What sort of place is Olympias City?

Olympias is a dystopia coming disguised as a utopia. It claims to be the perfect place of happiness, the best society in human history. They claim they’ve gotten rid of everything that had made human life miserable in earlier times. There’s only one catch. People who don’t want to participate in the perfect lifestyle are mercilessly hunted down and killed. Olympias doesn’t tolerate anything other than their philosophies.

GdM: What sort of themes do you explore in this book?

I think the most important theme in Behind Blue Eyes is freedom. Freedom of choice, freedom of speech, freedom of thought. It’s something the citizens of Olympias don’t have. And in my opinion, those are values that are worth being defended at any cost.

Another important theme is the human vs. machine one. In a future of almost limitless augmentations, where does the human end and the machine start? It’s also about the dark sides of technology.

GdM: Could you describe the antagonist of your book?

It will be my pleasure! The antagonist in Behind Blue Eyes is called Metatron. For a reason which is explained in the book, all cyborgs wear angel names. Metatron is the leader of the Guardian Angels; the elite cyborgs Nephilim is a member of. He’s absolutely ruthless and sadistic but he’s also highly intelligent, educated, and sophisticated. And he’s obsessed with Nephilim – for a reason that I can’t mention as it would be a massive spoiler.

I love multi-layered villains of great depth. The ones who constantly walk the thin line between being monsters and righteous. Metatron is my masterpiece (and I have been a professional writer for more than 20 years). Although clearly the villain, he’s still very likable, so much, that he’s the second most popular character in the book among readers. I think he tickles the hidden desire everyone has to submit to the dark side. And there’s so much more to him than it seems! 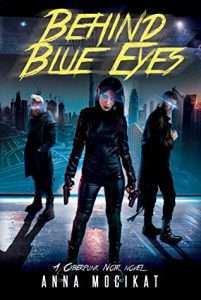 GdM: Who would you cite as your influences?

As mentioned before, my biggest influence is clearly Ghost in the Shell. In a way, Nephilim is like the dark, twisted little sister of Motoko. I see my work more in the tradition of the Japanese cyberpunk with Ghost in the Shell, Akira, Appleseed, or Ergo Proxy, whereas most contemporary cyberpunk authors cite Gibson as their greatest influence.

I also love the works of Philip K. Dick, Isaac Asimov, George Orwell and Aldous Huxley. BBE has themes from both 1984 and Brave New World in it, which are two of my all-time favorite books.

GdM: How do you like being an independent author?

Very much. I used to be traditionally published and had a big publisher back in Germany, where I published my first books. Here in the US, I was with a small publisher at first and am now full indie. The problem with publishers is, that in the end, the people who work there are just employees. They will go home at five and will never care as much about your book as you do. When they screw something up (and publishers screw up stuff all the time!), there’s nothing you can do about it. As an indie, I have full control. If someone screws up something, it’s me. And I will rather work for 18 hours every day for weeks to make things perfect than leave anything to chance. I’m a perfectionist.

GdM: How has the reception for Behind Blue Eyes been?

Extremely positive! Most people absolutely love the book. When I first published it last year, I was surprised how much people love it. Usually, there will always be people who won’t like your work and I had that with all my other books, but not with Behind Blue Eyes. People write me emails, telling me how much they loved it, others write poems inspired by Nephilim or create fan art of her. I also know several people who have developed a serious crush on her haha

All of this means very much to me as I believe Behind Blue Eyes is my best work and it has a very special place in my heart. I couldn’t be happier about the positive response.

The interesting thing about this is that once people read the book, most will love it. However, it’s very difficult to convince them to do so. I’m one of the very few female cyberpunk authors, and even fewer who don’t hide their identity behind gender-neutral pen names. Readers have prejudices against female sci-fi authors and cyberpunk in particular. They don’t expect my book to be really gritty, dark and action-driven (which it is 100%!) because so many women in the genre write YA or romance.

I feel I have to convince every single reader to give me a chance and once they do many will tell me, they have seen the book on Amazon or social media before and wish they would have picked it up much earlier.

GdM: What can you tell us about the sequel?

Behind Blue Eyes is only the first chapter in a much bigger and very complex story. I even see it more as a prologue than a chapter. It sets the stage for everything else that is going to happen. Many readers were surprised about the ending of book 1 and didn’t see some of the revelations coming at all. The way the story proceeds and where it is going will be even more surprising.

In book 2 someone is making hunt on the seemingly invincible Guardian Angels and is murdering them one by one. Nephilim is put in charge of the investigation, and it will lead her not only in Olympias’ darkest underbelly but also into the shiny world of the elites in the Inner Circle.

The second book has even more of a noir feel but as much action, violence, and sex as the first book – as you see, no YA themes here.