An Interview with C.S. Friedman 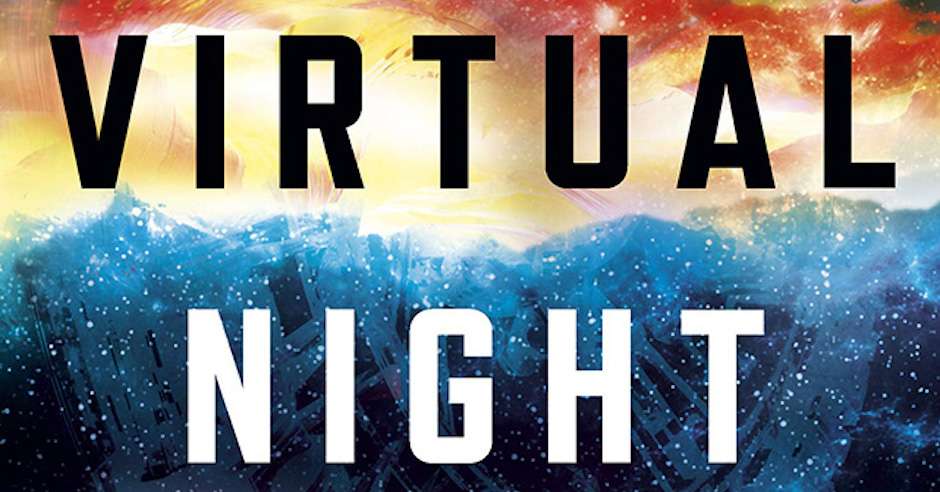 Speculative fiction author C.S. Friedman has released a sequel to her cyberpunk hit This Alien Shore, a New York Times Notable Book of the Year in 1998. The new novel titled This Virtual Night follows unlikely allies Ru Gaya, a risk-loving mercenary explorer, and Micah Bello, brilliant VR game designer, as they follow the trail of an unknown entity with the power to technologically alter human perception: a power that could cause the collapse of civilization as they know it. The third installment of the Outworlds series (no release date yet) is tentatively titled This Variant Tide. Friedman is also known for her popular Coldfire series.

I had the pleasure of interviewing her about the implications of virtual reality, the power of mega-corporations, her experience as a woman in the science fiction/fantasy world, and the writing process.

What inspired you to publish this sequel now, over 20 years after This Alien Shore was published? 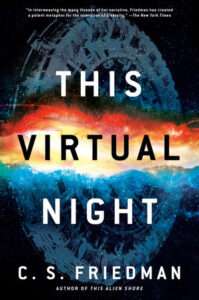 TAS is my most popular SF work, and It’s the only thing I’ve written that was specifically designed to support more than one novel. The universe of TAS has almost limitless potential for exploring alien settings and testing the nature of humanity, the two things that make SF exciting for me. It had been a while since I had written a SF novel, so when I decided it was time to do so again, a return to the Outworlds seemed the logical choice.

What would you say are the main themes for This Virtual Night?

I have to smile when you ask that, because despite the best efforts of high school teachers to explain the importance of “theme”, I don’t think I really understood why it mattered until I started writing.

Cyberpunk introduced the concept of human minds plugged directly into a data network, but rarely explored how that would impact the human soul. That is the primary theme of the entire series, and I intend to explore one aspect of it in each book. In TAS, I asked what a computer virus might become, in a world where it could invade and alter human minds. TVN asks where the line between reality and virtual reality can drawn—and should be drawn–when the latter is fed directly into the human brain. Every new technology brings with it new challenges to the human spirit, and sometimes threats humans did not anticipate; SF allows us to explore what those might be.

On the Gueran front, TAS presented a society whose raison d’etre was the accommodation of human cognitive diversity. Well, is there a condition which might not fit in, even there? Which would prove so problematic that Gueran society must provide special strategies to deal with it? Ru’s risk-seeking compulsion threatens the welfare of others, and so cannot simply be tolerated.  How then can it be channeled, in a way that is true to the Gueran ideal? And how does that reflect upon real-world history, in particular the actions of ancient explorers?

Racism is a major theme of the series, even more timely now than when the first book was written.  The physical differences between Variants are dramatic and undeniable, and the refusal of the Terrans to accept Variants as humans echoes the intolerance in Earth’s history, as does the fear at its root.  TVN gives us a closer look at the relationship between Terrans and Variants, and how racial stresses have impacted their development.

Both books deal with the thin line between sophisticated learning programs and actual consciousness. Where does life begin? If a computer program acts like a living creature, how must we deal with it?

Given the prevalence of augmented reality and virtual reality in both your novels, how do you feel about the real-world advancements in this technology? How has your perception of AR and VR changed since you released the original book? Do these continuing developments excite you, or frighten you?

I think it’s clear in my books that advancements in virtual technology should be both exciting and frightening. This reflects the Frankenstein motif that has been part of SF since Mary Shelly launched the genre: the more miraculous science becomes, the more likely it is to go wrong in some way we did not foresee. VR could easily become drug-like in its capacity for addiction: when you can make reality look like whatever you want, why bother with the real thing? Already we are seeing teens who prefer interaction on social media to real human contact.  As a SF writer, it is my job to explore how such advances might affect us.

Scientists are now experimenting with “headsets” of contacts that can sense subtle currents of electromagnetism within the brain.  By learning to control those currents, one can use the headset to control a computer. Let me tell you, it is both humbling and thrilling to realize that a technology you wrote about 20 years ago is now coming into existence. The only real difference is that I used visualization to control neural output, because vision maps so neatly onto the brain. So instead of “learn to activate this portion of your brain,” the instruction would be “visualize a circle”. Science will catch up with me eventually.  Another recent experiment mapped activity in the visual cortex and tried to derive an image from it, with promising results. So maybe in the end, science will travel the path I envisioned.

Both books in the series seem to have some clear anti-capitalist/corporation sentiments. With such a long break between the two books, was there a particular reason you felt like now was the time to return to these themes?

I disagree with you about the anti-capitalist message. There is certainly a warning about the power of mega-corporations, and how that power might be abused. And how timely an issue that is now, with the current investigation into the behavior of our tech giants!  Such companies have moved off-planet in my book, building themselves mini-worlds in which they answer to no one.  Even in the Outworlds they refuse to surrender their autonomy, creating technological fiefdoms that war with each other lik