Catherynne Valente is the author of over twenty books, several novellas, and a long list of short fiction. Her most recent, The Past Is Red, a post-climate change story of the last of humanity sailing on a pile of floating garbage, has been my favorite book I’ve read this year. Her newest, Comfort Me With Apples, a genre-defying not-quite-horror not-quite-thriller not-quite-fairytale comes out November 9th. I was thrilled to get a chance to interview her.

[RHM] First off, The Past is Red was so far my favorite book of the year, and a large part of that was Tetley’s voice. How did you know you had the voice right? Was it difficult coming back to that specific voice after the initial novelette? 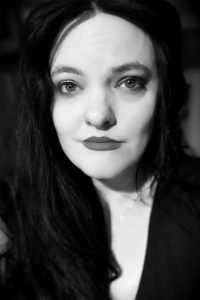 [CV] The voice arrived in my head with the first line of the short story and simply never left. Tetley was her own self from the jump, and I just followed where she led. I’ve always felt odd about other writers saying that—we make our characters, we are in control! But now I have to eat garbage-crow, because Tetley just appeared in my skull like Athena, determined to crack her way out. The story lives or dies on Tetley’s voice, if you like it, you’re in, if you don’t, my apologies. It’s also the most fun to write—the dichotomy between her joyful love of the world and conviction that it, and the people in it, is good and right, contrasted with the absolute grim horror of the reality of that world as it exists around her is pretty endlessly fertile ground.

That said, it was a bit tough getting back into that voice. I wrote The Future Is Blue, the first quarter of this volume, in the beginning of 2016. I wrote The Past Is Red in 2020. A LOT HAPPENED TO MY OPTIMISM GLANDS IN THAT TIME. It felt daunting to climb Mt. Joyful Girl again, and I wondered if I could get it back, make it last for much, much longer than a short story. The concepts of Mister and Big Red Mars pulled me through. I knew if I could get to them, I could pull it off. So Tetley is perhaps a little more cynical, a little more damaged, but her core is as it always was, a big summer sun shining on literal Sesame Street.

[RHM] With The Past is Red and Comfort Me With Apples coming out so close together, what scenes from each would you use to pitch new readers to pick them up? 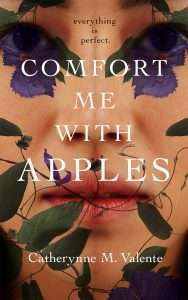 Comfort Me With Apples is a tough one because it has such a massive twist that we’ve worked so hard not to spoil in the lead-up to its release (and reviewers have kindly helped out!) so I would likely just read the first chapter, which sets up Sophia and her ever-so-slightly off existence, as well as the first of the hilariously specific HOA bylaws she lives under. All without giving away the game.

[RHM] Your writing tends to have a lot of voice, but this was purposefully reduced in Comfort Me With Apples, as Sophia has a more muted, naive personality than many of your protagonists. How hard was it to write a more stripped-down story?

[CV] It wasn’t at all, really. The voice serves the story, it’s not idiosyncratic for its own sake. Because of who Sophia is and