An Interview with Graham Masterton

Graham Masterton, known to be one of the lions of the horror genre and one of its most celebrated novels, is also one of its most prolific writers, with over 40 novels spanning multiple genres. He received the lifetime achievement award from the Horror Writers’ Association in 2019 for his work in the genre.

I had the immense honor of having a chat with the horror legend about his writing, sex-help novels, what he is working on now, and the horror genre in general.

[GdM] Before becoming a novelist, you were a journalist for a few years. Journalism requires a different type of approach to presenting the reader with an idea or situation. There is also a lot of overlap between the two. Could you tell me a bit about what you learned as a reporter and how that has affected your writing later in your career? 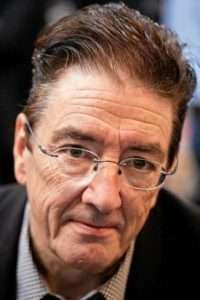 [GM] Most of my education was at Whitgift School in Croydon which was an all-boys school. My parents moved and I was supposed to complete my sixth-form education at a mixed grammar school in Crawley. Unfortunately (or fortunately as it turned out in terms of my career) I lost all interest in Shakespeare and Byron and Wordsworth and concentrated all my studies on Jane and Jill and Charmienne. After two terms I was asked to leave. After a short spell as a greengrocer I was offered a job as a junior reporter on the Crawley Observer newspaper. I was lucky that in those days local papers were staffed by semi-retired Fleet Street reporters who really knew their stuff, and so I was taught all the rudiments of writing a good news story, as well as layout and typography. The most important lesson I learned as a news reporter, though, I learned on my very first day. I was sent to interview a woman about her husband’s cycling trophies (not exactly front-page news) but after she had told me all about them and I was about to leave, she said, ‘He beats me.’ I went back into her living-room with her and for an hour she poured out the whole story of her husband’s abuse… how he hit her if she argued with him, how he threw his dinner onto the kitchen floor if it wasn’t what he wanted to eat, how he would rape her in the middle of the night when she was asleep. She had told her mother and her sisters, but they had simply told her that it was her fault for marrying him. There was little that I could do for her except to suggest that she go to her doctor and social services. But as I cycled away that day, I felt like Saul on the way to Damascus. I had learned in that one morning that everybody is bursting to tell you their story, especially if they are caught in a distressing situation from which they feel they can’t escape, and if you listen sympathetically they will tell you everything… right down to the most intimate details. Obviously my horror novels are based on fantasy and mythology, but I still base my characters on real people in ordinary situations… characters who have their own mundane problems like abusive marriages or debt or stress in their careers, apart from having to face up to demons and obnoxious spirits and other mythological perils. I believe that helps to make my novels more realistic and more frightening. The other important thing I learned as a reporter was how to join two contrasting or even conflicting ideas together to come up with an interesting story. As a reporter, if you witness a car crash, you don’t just describe the crash and any injuries that might result, you ask how and why did it happen, and who were the people involved.

[GdM] You are a sex instruction manual writer, 29 so far. I read that you got into that through writing a column for Mayfair, then through Penthouse magazine. I would love to know how you got from Mayfair to Penthouse and then on to writing the instruction manuals. And what continued to draw you to write on different topics in the genre?

[GM] After four years training on the Crawley Observer I wrote a very arrogant letter to the newly-launched Mayfair magazine, and they were so impressed by my arrogance that they gave me the job of deputy editor. The staff included the publisher, the editor, me, the secretary, and the publisher’s dog. Our office was the size of a wardrobe. But I was given free rein to write features and to organize fashion shoots and I also had the arduous job of going to the photographers’ studios and interviewing the girls who appeared in the centre-spread every month. Most men who casually visited the studios would simply gawp at the girls, but I always got to talk to them in the same way that I had talked to that woman whose husband had abused her. They told me just as much: about their boyfriends, about their ambitions, about why they had decided to pose nude, about their sex lives. I just listened and nodded and took it all in. At that time Penthouse was outselling Mayfair by a considerable number of copies and one of its most attractive features was the famous Penthouse readers’ letters, which were all very frank accounts of sexual encounters. I suggested that we start a regular column of verbatim interviews with girls about their sex lives… what they wanted and how they went about getting it. I called it ‘Quest.’ Of course I wrote all the girls’ responses myself, but they were based very closely on the personal stories that had been given to me by our models, so they were realistic and not misleading, and hopefully quite informative too. After three years at Mayfair I had an argument with the editor and simply walked out. I phoned the editor of Penthouse, and he gave me a job as deputy editor the following week, for twice the pay. At that time, Penthouse had just started publishing an American edition, and so I was sent to New York fairly regularly to help out. While I was there I met Howard Kaminsky from Warner Paperback Library (who happened to be the cousin of Mel Brooks, whose real name is Mel Kaminsky). He suggested I write