An Interview with Peter McLean 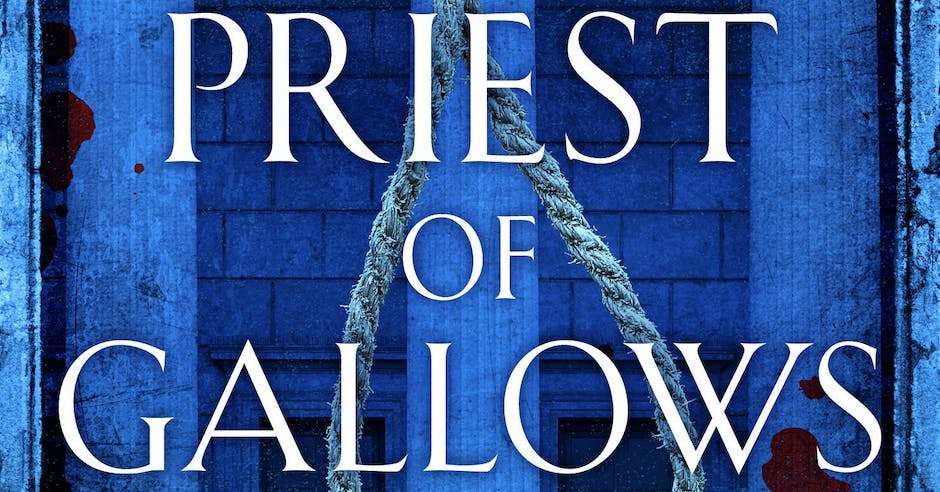 Greetings grimlings! This issue I join you from a dingy bar in Ellinburg where I have finally cornered Peter McLean for a chin wag. In case you are unfamiliar, Peter is the author of the fantastic series The War for the Rose Throne which started with Priest of Bones. If you haven’t read this series (which still has two more installments coming), I highly recommend rectifying that situation posthaste!

Peter, thanks for taking time out of your busy schedule and welcome! 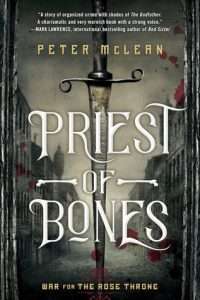 [PM] I’ll allow that you’ve found me. Pull up a stool, pour yourself a brandy, and let’s talk business.

[GdM] Let’s start off with your leading man—Tomas Piety. He is an interesting contradiction of a man. A priest from the army who basically came from being a small-town mob boss and then returned back to it after playing preacher in the war. What inspired such a complex character for you?

[PM] Ah, Tomas is a reflection of the archetypical gangster transposed into a fantasy world. He’s the abused working-class kid who worked his way up from petty crime in the slums to organised crime in the big city, and built a criminal empire with his younger brother. The whole priest thing was a strange development. I had the title “Priest of Bones” written on a post-it note on my desk long before I had the faintest idea what it meant. It was just one of those shower thoughts, you know? I thought, “That would be cool”, but at the time I had no coherent idea what “that” actually was. Once I had put together the Elizabethan-but-sort-of-post-WWI vibe I wanted, the idea of Our Lady of Eternal Sorrows just came to me. She is the death goddess that the conscript soldiers worship in a desperate attempt to persuade Her not to take their life today. When their company’s priest falls in battle Tomas, being the only other soldier with any leadership experience, is chosen as his natural successor. He’s not a religious man in the slightest, but he has an innate ability to make people want to confide in him, to say their confessions.

And of course, the war had a huge effect on him as it did everyone else who fought. I was really going for the Great War experience with his memories of Abingon, the horrors he lived through that he will never forget. So much fantasy focusses on epic wars, but there is often little acknowledgement of the legacy that war leaves in its wake. That is something I’ve been trying to redress throughout this series.

[GdM] Now onto Tomas’ second—Bloody Anne. I have to say that as far as supporting casts go, she is one of my favorites. Loyal as hell to Tomas and a hard-nosed, badass in her own right. We all see constant criticisms online when men write strong female characters. Was it hard as a man writing Bloody Anne? Also, was she inspired by anyone you know?

[PM] Oh gods I absolutely adore Bloody Anne. I basically wrote her as the best mate I wish I had, in the same way I have always wanted Druss the Legend to be my dad (no, I’m not all that much younger than Druss now, shut up). Was it hard to write her as a woman? No, I don’t think so. I have met a fair number of women in my 48 years of life, and am actually married to a real live one. Women aren’t a different species, and I’ve never really understood the perceived problem with this. Anne is, I hope, a living breathing person in War for the Rose Throne like anyone else is.

[GdM] We’ve seen Tomas evolve as the series moves on and he matures. Without spoiling too much, recent installments of this series have shown his role even as a crime boss drastically change due to what I—in the interest of remaining spoiler free for the readers will call—outside pressure. Will we be seeing Mr. Piety expand his operation into a bigger arena in future stories? 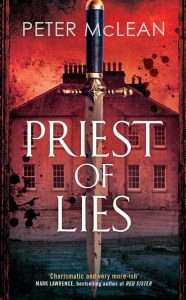 [PM] Oh, and then some. The archetypical gangster’s story arc can only go in a few directions. He dies, he turns snitch, or he goes into politics. Again, trying to avoid spoilers, but bear in mind we have the fantasy equivalent of the CIA/MI6/Gestapo involved in this and… yeah. Tomas’ life gets a lot more complicated after Priest of Lies.

[GdM] One thing I really liked about the Rose Throne setting is it focuses more on the gritty underbelly of the world and the magic system doesn’t overpower the story. It is used sparingly and not a tool to drive the plot forward. What