An Interview with Sarah Chorn

Hey folks, we have a great interview with a fantastic author who has a long history of reviewing independent and grimdark books on her website. Sarah Chorn, owner of Bookworm Blues, is the author of both Seraphina’s Lament and now Of Honey and Wildfires. Both books of which I enjoyed tremendously.

She was nice enough to sit down with us and answer a bunch of questions about the more recent of the two. I strongly recommend readers looking for a new independent book to try and check out either of those but especially Of Honey and Wildfires.

[CP] Please tell us what Of Honey and Wildfires is about. 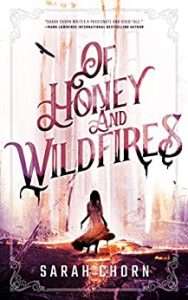 [SC] Of Honey and Wildfires is really a family drama. I wanted to tell a story that shows what decisions can do, and how they can ripple through generations. I also wanted to tell a story set in a landscape I understand and live in, so I settled on the Wild West. I was reading a book about the early oil industry and the like at the time, and I realized that there was so much greed and hope powering the entire western expansion, the rush for gold, the early oil, the silver in Nevada and the like and the entire thing sort of just meshed together and out popped Of Honey and Wildfires.

Basically, what interests me with fantasy is less the broader scope, wider world, larger picture stuff, and more the emotional, intimate battles. I wanted to take all those moments that personally feel like these epic wars, yet so often get overlooked, and turn them into a book.

So I guess you could say, Of Honey and Wildfires is a family drama set in the Wild West, where oil and coal basically serve as the magic system, and money and greed rule.

[CP] What separates it from other books in its genre?

[SC] Oh hell, does it even have a genre? I can’t figure out what books really would be classified as being in its genre, to be honest. It’s not weird west, it’s not steampunk. It’s too fantasy for some, not fantasy enough for others… I think maybe what sets it apart from other books in its genre is it doesn’t really have a genre. I had a reader write me the other day and say, “You really are a genre unto yourself.” And not ten minutes later, another reader on Facebook said I write “Grimchorn. You are your own genre.”

I don’t know if that’s a good thing or a bad thing, but I think “Grimchorn” is pretty cool sounding, so I’ll keep it.

[CP] Why did you decide to do a book set in a mining town?

[SC] I do a lot of research when I’m writing books. A lot. I like my worlds to be just fantasy enough, and yet rooted enough in reality that they really straddle that line. I think that’s why I do tend to get the “it’s not fantasy enough” or “it’s too fantasy” comments in some of my reviews. I like to sort of blend fantasy and reality like that.

Anyway, I was doing all this research on the early oil industry in the United States around the 1830’s, I believe, and one thing lead to another and I ended up on this wild chase through all these Wild West archives where I was reading about these mining towns that were out west, in places like Nevada, where the United States didn’t really have a huge foothold. These companies would go out there and basically just buy the entire place up, and the people who worked there often lived in HORRIBLE conditions. Crimes were solved by vigilantes, and justice was often harsh and the health conditions were just… surreal. Terrible in every respect. The overseers were often corrupt. Life was HARD, and it fascinated me. I mean, I live out here in Utah and we have a ton of old ghost towns around that were originally booming mining towns, lots of stories about these company-owned places that were just horrible… and I realized this is basically perfect for a book. It’s rarely, if ever, written about, and there’s so much conflict between basically every single person all the time just to survive, and a layer of desperation over all that that just excited me and seemed perfect to play with.

It just was fruit ripe for the plucking. The best setting for a book where I was exploring the little personal dramas of living in a place that is owned, literally, by a company. I was reading about all this, and I realized the external conflict inherent in such a situation would balance the internal conflicts I wanted to focus on really nicely.

[CP] Could you describe how magical your world is?

[SC] One of the things about this world, Sefate, that I set out to do from the start, was keep the magic system understated. It is based on oil and coal, and it is a big part of life, but I didn’t want it to be so intricate I had to map it out for readers, and so overwhelming it was all people focused on in the book. This book is very much about PEOPLE, and I needed to keep it that way. Honestly, the balance between keeping the magic system kind of nebulous, and the people in the foreground when the magic is literally what powers the plot was… quite a thing to behold. I really had to work at it.

However, Sefate is the world this takes place in, and Shine Territory is just one part of it. The Songs of Sefate series, of which this is the first book, is going to be telling stories from all different parts of this world, and “shine” will be the thing that unifies all these different locations. It will play a bigger role in some books than in others. Think of Sefate as a tree, and this is just one branch of it. I’m really looking forward to exploring how cause and effect work out in this system I’ve set up.

I talk a bit about Sefate, and this series, and all the different cogs in it and what to expect on this blog post.

[CP] Who are the protagonists?

[SC] Cassandra is the daughter of an outlaw. He drops her off with his sister when he’s five, and he sets about trying to destroy the company that owns the territory. Her story is told about the act of growing up, becoming a woman in a world where you’re overshadowed by your father’s crimes, and an outcast simply because you happened to be born.