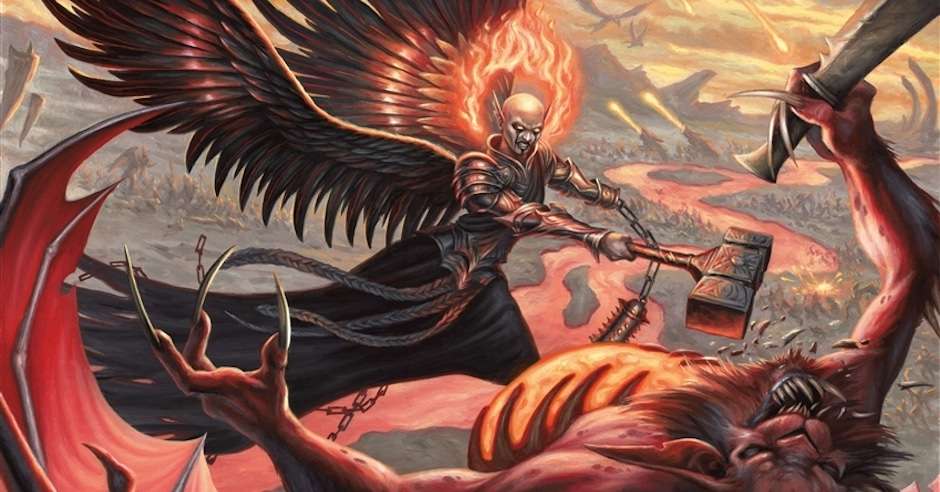 D&D’s newest campaign setting is dragging players straight to hell. This September, Dungeons and Dragons fans will have a chance to pick up Baldur’s Gate: Descent Into Avernus, a pre-written adventure module that’s equal parts high fantasy, Dante’s Inferno, and Mad Max: Fury Road. The campaign takes players from level one to thirteen and throws them into the first layer of the Nine Hells and the frontlines of an infernal battleground.

While the other eight tiers of the lower planes are less than hospitable, Avernus has the special distinction of playing host to the Blood Wars, a brutal and eternal struggle between lawful devils (who wish to rule mortals through deals, contracts, and deception) and chaotic demons (who just want to watch the world burn). To survive, players will have to make questionable allies with lesser evils, and even the most righteous of paladins will need to decide just how far they’re willing to compromise.

As a longtime D&D player and a fan of all things grimdark, I’m more than a little excited about this book. On the Dungeon Master side of the equation, Avernus promises a host of distinctive NPCs to roleplay and run in combat encounters. Some early standouts include Bitter Breath (a wingless, tongueless, and eerily silent devil), Mad Maggie (a Night Hag warlord with a fleet of fiendish bikers), and Smiler (a sadistic Fey the designers have compared to Jigsaw). On the other side of the cardboard screen, players can look forward to bartering soul coins, making faustian pacts for gold and experience points (or their very lives), and designing and upgrading their own Mad Max-style War Machine. Overall, this campaign setting promises to be the grimmest and darkest since Curse of Strahd. Maybe it is better to rule in hell than serve in heaven…

For a closer look at unholy things to come, a small selection of developer interviews is included below:

Descent into Avernus drops on September 2019. G’arn, go grab yourself a copy!