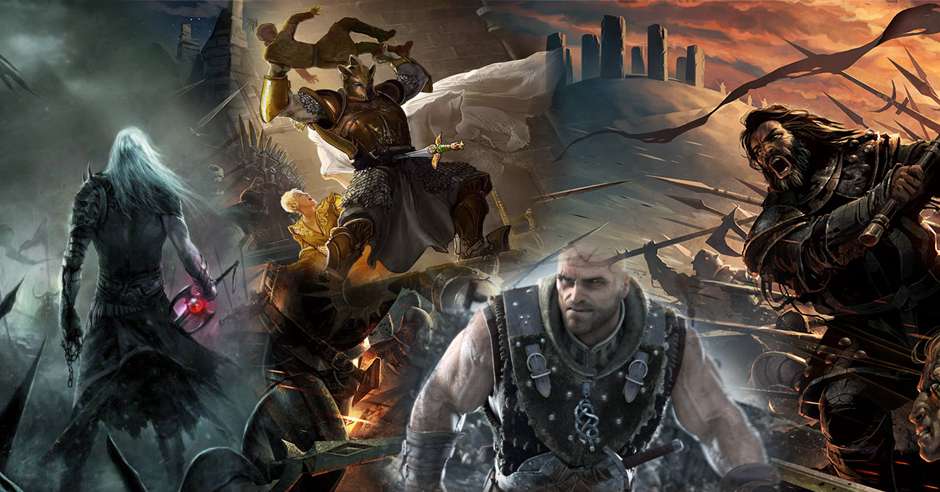 Many fans of grimdark literature, film, and games might argue that the term villain is an inappropriate one for the genre. It conjures an image of the mustache twirling evil-doer whom the square-jawed hero must face before heroically rescuing the damsel in distress. They tend to think grimdark solely deals in antagonists and this is a more “mature” manner of writing. I argue the truth is, like grimdark itself, more complex.

In my previous article, “Who is the Grimdark Hero?” (Grimdark Magazine #5), I write about what defines a grimdark hero (or protagonist, if you prefer). Here, we’ll look at the characters whom our heroes and anti-heroes find themselves pitted against—those pesky grimdark villains who we all love to hate. As any fan of the genre knows, the villains of grimdark are many and varied.  However, although there are of course exceptions, the villains of grimdark generally fall into one of four categories: the Opponent, the Mirror, the Vile, and the Monster.

The Opponent is quite simply the individual whom the grimdark hero is forced to kill or face on the battlefield. They aren’t noticeably different from anyone else in the story world, but circumstances have set them in conflict with the protagonist. In the low-fantasy manga Berserk, swordsman Guts’ opponents during his time with Griffith are soldiers of a rival kingdom and, as often as not, mercenaries just like himself. They fight and die for their payday with no moral component to their struggle. This doesn’t reduce the danger to life and limb these Opponents pose; rather, the absence of moral polarities underscores that grimdark heroes live in a world where people do not kill for good or evil but for causes, allegiances, gain, and necessity.

In the video game Fallout: New Vegas, the ongoing war’s factions include roboticist Mister House and the expansionist New California Republic. Both sides are decent but ruthless people. Resolving the conflict will require one or the other to be defeated. In Joe Abercrombie’s The First Law trilogy, Bethod and even Black Dow are similar examples. Logen perceives them as villains, but really they just have a different perspective and goals to the protagonist. Bethod wants to avenge past wrongs done by the empire and is trying to keep his fragile alliance together by waging war against Logen’s allies. Black Dow, simply put, sees Logen as the bad guy for his myriad bloody deeds.

Similarly, The Elder Scrolls V: Skyrim is perhaps closer to high fantasy than grimdark, but its ongoing civil war between the Tamriel Empire and Stormcloak Rebellion is one with no clear moral superior. If the protagonist chooses to get involved, their goal is as likely to try to bring the killing to an end (and achieve 100% completion) as it is to do what they believe to be morally right.

This doesn’t mean the Opponent has to be the kind of fellow the hero can sit back and have drinks with, though. Quite the contrary, giving the Opponent complex and real motivations means they can be utterly antithetical to our heroes. The Grey King in Scott Lynch’s The Lies of Locke Lamora has done appalling things, perhaps enough that he might be called evil, but we understand his need for revenge against those who murdered his friends. By the time of the climatic confrontation, though, Locke isn’t there to kill the man for these deeds. No, his motivations are strictly personal. The Grey King has harmed those Locke cares about and our antihero simply wants to make him gone for these very personal motivations.

Revenge without the pretense of justice.

Many grimdark fans might begin and end their belief about the grimdark genre’s foes with the Opponent without considering the complexity of many grimdark villains’ motivations. However, this ignores a much broader and richer tapestry of antagonists, including many characters who are equally as complicated and fascinating as the Opponent, though they differ in their relation to the hero and the story world.

Contrasting the Opponent for example is the Mirror who is, in effect, the grimdark hero meeting another of their kind. In The Walking Dead television show, Rick Grimes is continuously challenged by his slightly less moral friend Shane. In earlier seasons, it would be easy to suggest that Shane is the villain of the two, but events eventually show Rick is every bit as capable of evil and motivated by a singular desire to protect his people as Shane is. It’s just that Shane has shed any moral illusions about himself far more rapidly than Rick.

Similarly, in The Witcher 2: Assassins of Kings, Geralt of Rivia’s fellow witcher Letho has accidentally framed Geralt for murdering a king and turned him into a fugitive across the North. By the time they finally confront each other, Geralt has very likely killed or manipulated as many people as Letho and possibly assassinated a king just like he’s been accused of. The two men have almost nothing to separate them other than space. Neither has the moral upper hand.

The Mirror allows us to measure our hero, his motivations, and the qualities that define him. Max Rockatansky is far removed from the bandits of The Road Warrior in his mind, but from the perspective of the Riggers, he is nothing more than the same kind of bandit that is menacing them. Given how much he is already willing to do to survive, how much longer is it until he’s no different from Lord Humungus and his crew? The original script had Max’s former partner Goose as the identity of Lord Humungus, and although this element was (thankfully) dropped, a picture of the pre-apocalypse Humungus with his family implies that Max’s past may be quite similar to that of his Mirror nemesis. The Mirror reminds us that while we may spend time in the headspace of antiheroes, we should perhaps remember that theirs is not an objective view of the world, and the opponents they face may be just like them from another point of view.

Some antagonists, though, are beyond the pale.

The grimdark world is one where there is rarely an objective moral standard of good or evil. If gods exist, they are often as flawed and immoral as humans if not more so. Nevertheless, there exists a class of opponents who both the reader and the protagonist must despise. These are the Vile, those characters who are less individuals than they are incarnations of evil. They may have pasts and motivations, but their defining quality is they have cast aside all limits on their behavior to indulge in the basest of their desires. While some grimdark antiheroes approach this level of ruthlessness, they usually have some redeeming quality that allows them to rise above themselves. For example, the Blackthorn in The Ties That Bind by Rob J. Hayes has an intense loyalty to his friends, while his ex-partner Swift does not.

The Vile include individuals like the Mountain in A Song of Ice and Fire, the Falconer in The Gentleman Bastard series, and Leo Bonhart in The Witcher series. The Mountain rapes, pillages, and burns his way across the Riverlands because, essentially, he enjoys it. It makes him rich and respected, if not loved, in Westeros. His pre