Excerpt: Beasts of the Burnished Chain by Alex Marshall 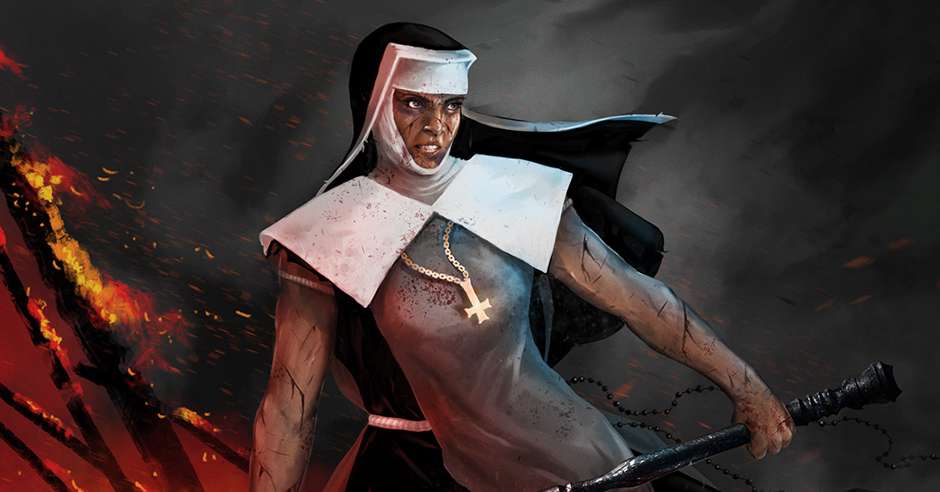 Alex Marshall’s Crimson Empire is one of the best grimdark fantasy series to hit stands over the last few years. Deeply imaginative, gritty, and darkly funny, we were excited as all hells to be able to pick up a Crimson Empire novella featuring everybody’s favourite war nun, Portoles. Check out the first section of it below, then grab the rest in GdM#14! 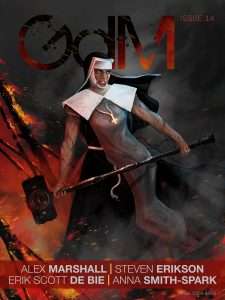 Beasts of the Burnished Chain

Every army needs to eat, and even crusaders like cantaloupe. That’s how simple the thinking must have been. Nothing wrong with a simple plan, so long as it works.

The farmers fled the field as soon as the Agallochian scouts appeared on the road, tarrying just long enough to unhitch their carthorse from a melon-laden wagon before abandoning their harvest. By the time the rest of the regiment caught up with the outriders the sun was high over the sprawling field and surrounding forest. The sweat dripping off the infantry was the first rain the baking earth had tasted all day, and far more sustained than the brief thundershowers that rolled through most afternoons. Summer in the westernmost province of the Crimson Empire was so infernally hot the superiors in the Chainite attaché had given their soldiers dispensation to remove the sleeves from their heavy black habits. Between this concession to the climate and the officers’ insistence that, for the sake of security, the anathemas should go without the black cloth masks the church usually insisted their most wretched servants wear to spare the pureborn from the sight of their sin-twisted features, Sister Portolés felt practically naked.

It was not a pleasant sensation, but that was all right. Pleasant sensations were but snares of the Deceiver, just like the pity she felt for the poor wretches who had tended this field from seed and sprout only to have their regent’s peckish regiment arrive at the worst possible moment. Such impure sentiments must be ripped out by the root before they could grow. Whatever petty noble or local collective owned this field, they owed fealty to the Lord of Agalloch, who in turn gladly served the Burnished Chain. In times of crisis such as this, all true servants of the Fallen Mother should be thankful to feed the righteous army of the faithful.

And if this bounty of ripe melon was grown by rebels who had pledged allegiance to the Crimson Queen instead of the Black Pope and their own liege, then they deserved far worse than empty bellies. Far worse was just what the joint force of Agallochian soldiers and Chainite crusaders on retainer from Diadem intended to pay the guerilla army who hid out here in the borderlands between their native province and the vast Witch Wood. Just as soon as they could find the godless turncoats, that was. Civil war might be tearing the rest of the Empire apart, provinces fighting one another in the name of Crown or Church, but out here in the Imperial boonies the Lord of Agalloch had to take his own traitorous vassals in hand before he could even think about marching on his neighbors. Hence his request for Chainwitch reinforcements—the holy monsters of the mother church could end the insurrection before it spread.

Yet, obvious as such a tactic appeared on parchment, even simple plans can go awry. Thus far the strategy had proven damnably difficult to implement. This was largely due to the cowardly tactics of the rebels, who staunchly refused to engage their far more numerous and better equipped adversaries on the open field. Their hidden stronghold remained just that—hidden and strong. While the fort was presumably tucked away in the depths of the devil-haunted Witch Wood, that didn’t make the task of pinpointing its location any easier. The ancient forest was as vast as it was thick, and save for breathless tales of hideous beasts, the scouts who ventured into its interior returned empty-handed … if they returned at all.

Then there was the further complication that despite all the rumors—rumors the Church did little to dispel—the Chainite troops did not actually seem to wield devastating arcane power. The ominous covered wagons at the rear of their caravan had yet to disgorge an elite unit of Chainwitches, sorcerous artillery, or any of the other potential war-winning weaponry the grunts gossiped about. This begged the question of whether the black-draped vehicles weren’t just an ostentatious but ultimately mundane addition to the regiment’s baggage train. And seeing how many of their holy soldiers fell during the first engagement with the rebels, th