Excerpt: The Court of Broken Knives by Anna Smith-Spark

Smith-Spark’s writing style moves at a million miles an hour, sweeping you up in its intensity. Quint von Canon has captured the sense of movement and violence quite well in this artwork Anna supplied with the below excerpt.
I hope you enjoy the opening to The Court of Broken Knives as much as I did. 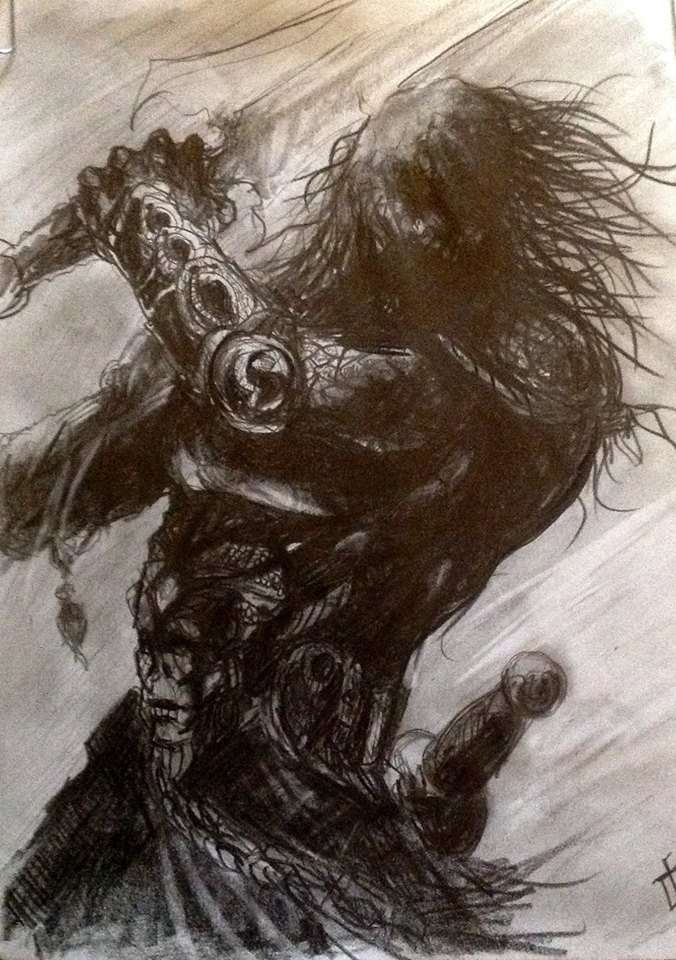 The Court of Broken Knives (Empires of Dust 1)

Down to close work like that, men wrestling in the mud, jabbing at each other, too tired to care anymore. Just die and get it over with. Half of them fighting with their guts hanging out of their stomachs, stinking of shit, oozing pink and red and white. Half-dead men lying in the filth. Screaming. A whole lot of things screaming.

Impossible to tell who’s who anymore. Mud and blood and shadows and that’s it. Kill them! Kill them all! Keep killing until we’re all dead. The knife jabs and twists and the man he’s fighting falls sideways, all the breath going out of him with a sigh of relief. Another there behind. Gods, his arms ache. His head aches. Blood in his eyes. He twists the knife again and thrusts with a broken-off sword and that man too dies. Fire explodes somewhere over to the left. White as maggots. Silent as maggots. Then shrieks as men burn.

He swings the stub of the sword and catches a man on the leg, not hard but hard enough the man stumbles and he’s on him quick with the knife cutting. A good lot of blood and the man’s down and dead, still flapping about like a fish but you can see in his eyes that he’s finished, his legs just haven’t quite caught up yet.

The sun is setting, casting long shadows. Oh beautiful evening! Stars rising in a sky the colour of rotting wounds. The Dragon’s Mouth. The White Lady. The Dog. A good star, the Dog. Brings plagues and fevers and inflames desire. Its rising marks the coming of summer. So maybe no more campaigning in the sodding rain. Wet leather stinks. Mud stinks. Shit stinks, when the latrine trench overflows.

Another burst of white fire. He hates the way it’s silent. Unnatural. Unnerving. Screams again. Screams so bad your ears ring for days. The sky weeps and howls and it’s difficult to know what’s screaming. You, or the enemy, or the other things.

Men are fighting in great clotted knots like milk curds. He sprints a little to where two men are struggling together. Leaps at one from behind, pulls him down, skewers him. Hard crack of bone, soft lovely yield of fat and innards. Suety. The other yells hoarsely and swings a punch at him. Lost his knife, even. Bare knuckles. He ducks and kicks out hard, overbalances and almost falls. The man kicks back, tries to get him in a wrestling grip. Up close together, two pairs of teeth gritted at each other. A hand smashes his face, gets his nose, digs in. He bites at it. Dirty. Calloused. Iron taste of blood bright in his mouth. But the hand won’t let up, crushing his face into his skull. He swallows and almost chokes on the blood pouring from the wound he’s made. Blood and snot and shreds of cracked dry human skin. Manages to get his knife in and stabs hard into the back of the man’s thigh. Not enough to kill, but the hand jerks out from his face. Lashes out and gets his opponent in the soft part of the throat, pulls his knife out and gazes around the battlefield at the figures hacking at each other while the earth rots beneath them. All eternity, they’ve been fighting. All the edges blunted. Sword edges and knife edges and the edges in the mind. Keep killing. Keep killing. Keep killing till you’re all dead.

And then he’s dead. A blade gets him in the side, in the weak point under the shoulder where his armour has to give to let his arm move. Far in, twisting. Aiming down. Killing wound. He hears his body rip. Oh gods. Oh gods and demons. Oh gods and demons and fuck. He swings round, strikes at the man who’s stabbed him. The figure facing him is a wraith, scarlet with blood, head open oozing out brain stuff. You’re dying, he thinks. You’re dying and you’ve killed me. Not fair.

Shadows twist round them. We’re all dying, he thinks, one way or another. Just some of us quicker than others. You fight and you die. And always another twenty men queuing up behind you.

Why we march and why we die,

Understands that better than he’s ever understood anything, even his own name. But suddenly, for a moment, he’s not sure he wants to die.

The battlefield falls silent. He blinks and sees light.

A figure in silver armour. White, shining, blazing with light like the