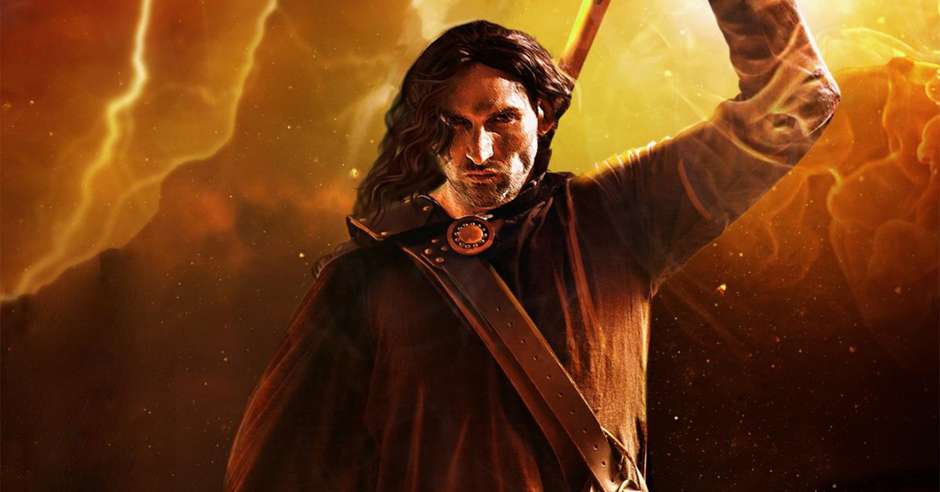 Bestselling Author M.L. Spencer has released Darkrise, Book Four of The Rhenwars Saga and as a nice little sneak peek for those who haven’t grabbed the book yet, we’ve got an excerpt for you. Come check out what had Booknest.eu calling it “one of the best fantasy stories I’ve read this decade.” 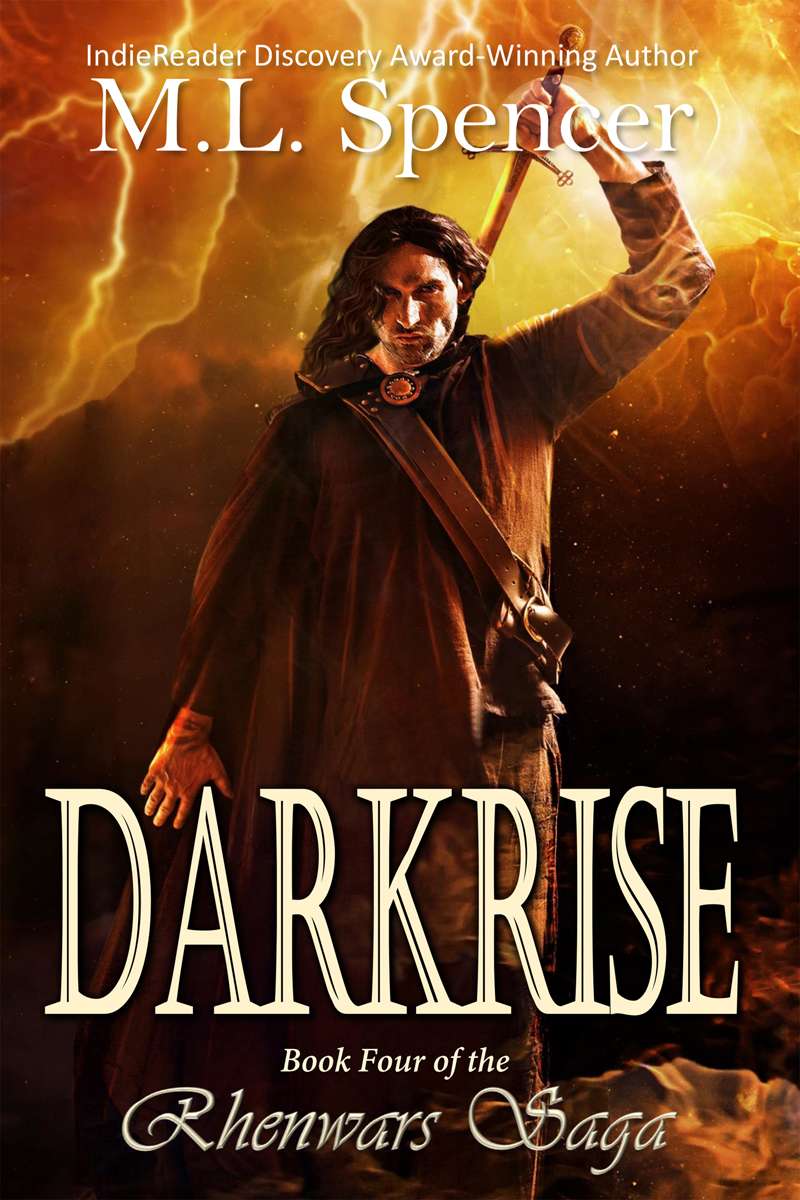 Darien turned to Byron Connel in alarm. “What is this? What’s going on?”

Connel untied the spiked silver weapon from his belt, wielding it like a club. His red-bearded face was full of arrogance and ice.

“It is called the Rakkah,” he said. “The final test of a Battlemage. You are well-schooled in defensive tactics, but that’s only half the equation. Now you need to learn how to kill. Above all else, you must fortify your resolve.”

He motioned ahead at the line of men stretched out along the walls of the canyon.

Darien felt ice-cold dismay as understanding hit him in the face.

“You want me to kill all these men?”

The Battlemage nodded. “I need you combat-effective.”

Darien paced away a few steps, eyes studying the first man in the long, drawn-out line. The man was a soldier, a Tanisar by the uniform. He stood at attention beside his small fire, face untroubled by emotion. He had the look of a man resigned to duty and fate.

Darien spun away, feeling sickened. “Who are they?” he demanded. “What have these men done to deserve death?”

Byron Connel moved to stand in front of him. He was taller than Darien, his face set in harsh, uncompromising lines. “They are Tanisars. Soldiers who volunteered for this duty. Men who desire only to serve you.”

That explanation sickened Darien even more. His throat clenched in rkevulsion. “Why would they volunteer for this?”

“Because I asked them to. There is much sharaq in such a death. They know they lay down their lives to help prepare the greatest weapon Malikar has ever known. The selfsame weapon that will deliver their families from the curse of darkness.”

Darien shook his head, backing away from Connel. “I’m not a weapon,” he whispered.

Darien shuddered, sickened with disgust. “I will not murder these men.”

“Yes, you will,” Connel said gruffly. “This is the Rakkah. The final trial of an apprentice Battlemage. You must pass the Rakkah to earn admittance into our order. The price of failure is death. There is no going back. There’s no halfway. The Rakkah has already begun.”

“I won’t do it.” Darien turned his back on Connel and began stalking away.

The hand of the gods reached down from the sky and slapped him off his feet, hurling him hard against the face of the cliff. Darien slumped to the ground, where he lay stunned, gazing up at the ink-black sky, slowly blinking. The taste of blood filled his mouth. His vision went from white to red.

Connel reached down and hauled him to his feet. He wielded his spiked talisman in his right hand, bracing Darien upright with his left. Darien staggered, reeling. He couldn’t seem to focus on the man’s face. Pulling at the magic field, he struggled to heal his injuries. The world went dark, and he wilted to the ground.

“Be warned,” Connel growled into Darien’s face, leaning over him menacingly. “The next blow will be a killing strike.” He motioned to the first man behind him. “Stand up! You bring dishonor to Sinan.”

Darien rolled over, pushing himself weakly to his knees.

“Who’s Sinan?” he asked, still half-dazed by the talisman’s magical strike. He staggered to his feet, taking a limping step ahead. He brought a hand up to his face, smearing a trail of blood that trickled from his nostril.

“Sinan is the soldier whose duty it is to teach you the hijaz attack.”

Darien glanced at the young Tanisar by his lonely campfire. “I don’t understand. How can that boy teach me anything?”

Darien didn’t want to ask. He swallowed against a knot of despair in his throat, feeling the last of his resistance crumbling away. He knew when he was beaten. There was no use in putting up a fight; with Thar’gon in his hand, Connel was far too powerful.

Heart pounding in his chest, Darien walked toward the first man in line.

He regarded the soldier before him: a young man with dark, shoulder-length hair and a prominent nose. There was no trace of struggle nor sadness in the soldier’s eyes; only a calm, determined strength. The man dipped his head in greeting.

“Lord, I am Sinan son of Semal. It is my honor to teach you the attack known as hijaz. It is a very complex attack to master, I am told, so you must pay very careful attention.”

Darien blinked, gazing deeply into Sinan’s dark eyes. The young man was rattling off a prepared statement, something he’d been made to memorize. It had the distinctive formula of a ritualized speech.

“The hijaz, if performed correctly, will cause the body of a victim to explode. This is a very effective tactic for spreading fear to demoralize your enemy. Darien Nach’tier, please allow me the honor of teaching you the hijaz attack.”

Darien swallowed, his mouth filling with the sour taste of acid. He brought his hands up, gripping the man’s shoulders. “Your name is Sinan son of Semal?”

The soldier nodded. “It is, Lord.”

Darien closed his eyes, clenching his teeth against the ache of horror.

The young man regarded him with an expression akin to sympathy. “I am sorry, Lord. It is my duty.”

Darien released Sinan’s shoulders, glaring his hatred back at Connel.

The Battlemage stepped forward, taking Darien’s hand in his. “Feel through me.”

There was absolutely no emotion in his voice. Darien could feel his hand shaking in Connel’s grip. dHis whole arm trembled. He closed his eyes, opening himself to Connel’s link. Instantly, he felt inside of Sinan. He could feel the pressure of the young man’s blood as if feeling his own veins. It pulsed and throbbed, swelling in volume with every heartbeat.

He could feel what Connel was doing with his mind. Increasing the pressure of the blood against Sinan’s arteries, at the same time applying a counterpressure that kept the system in balance. He could hear Sinan groaning as the pain became unbearable.

“Do you feel it?” Connel asked.

Darien grimaced. He felt it. It was awful. He could feel Sinan’s blood on the verge of boiling. The soldier in front of him collapsed to his knees, throwing his head back as he moaned in tortured anguish.

Byron Connel leaned forward and growled in his face, “Don’t let him suffer!”

Darien stroked Sinan’s body with his mind. He released the counterpressure Connel had applied to contain the man’s raging blood.

Sinan exploded in a showering rain of gore.

Darien shielded his face with his hands. He stood there shaking, hands trembling over his face, unable to bring himself to open his eyes. He felt Connel’s hand on his neck, grabbing him by the fabric of his shirt, hauling him forward. Darien’s stomach wrenched. He swallowed against the taste of vomit in his mouth.

Connel’s harsh grip jerked him to a halt.

Darien opened his eyes. He stood in front of the next soldier in the line. This man was slightly older than Sinan had been, slightly taller. A fine mist of blood covered one side of his face. His forehead had broken out in a sheen of perspiration despite the chill of the air.

“It is my honor to teach you the attack known as nebiza. If performed correctly, the nebiza causes the nerves of your opponent to quit functioning. This is a very effective tactic for stopping the hearts of many warriors at once. Darien Nach’tier, please allow me the honor of teaching you the nebiza attack.”

Darien groped for strength, his breath shuddering in his throat. He stepped forward, gripping Alton’s shoulders with his hands.

“Your name is Alton son of Orhan?” He wanted to make sure he had it right.

He would remember those names. He swore right then and there he would never forget them.

Darien bowed his head. “You honor me, Alton.”

Darien pulled back, glaring at Byron Connel. The Battlemage took his hand. Again, Darien found his consciousness fed through Connel into the soldier standing in front of him. He could feel the man’s nerves at work, regulating the pace of Alton’s heartbeat. A subtle change in those impulses could stop that instantly.

“Do you feel it?” Connel whispered.

Darien sagged, groaning. He didn’t want to kill Alton son of Orhan. He admired the gentle depths in the man’s dark eyes.

With a wrench of Darien’s mind, Alton’s heart seized in his chest, his body crumbling to the blackened earth. Darien stared down at him, drowning in self-loathing.

Connel guided him forward to the next man in line.

“Lord, I am Devrim son of Enver. It is my honor to teach you the attack known as ruhk. If performed correctly, the ruhk will cause the flesh of your opponent to catch fire. This is a very effective tactic for causing a terrible, excruciating death. Darien Nach’tier, please allow me the honor of teaching you the ruhk attack.”

Darien leaned forward, gripping the man’s shoulders in his hands. He stared into the depths of the young man’s eyes.

“Your name is Devrim son of Enver?”

Darien offered his hand to Byron Connel. Instantly, he was transported deep inside Devrim, feeling the warmth of the young man’s core. He could feel the source of that heat. He understood how to change it. Such a subtle difference. But if done in every tissue of the body altogether at once…

Darien squeezed his eyes shut, trembling as Devrim burned. The soldier’s screams were appalling. They went on for a very long time.

He felt Connel’s hand on his back. He walked forward, swallowing his emotions, stoppering them up inside. He raked his shirtsleeve across his eyes, wiping away his humanity.

Darien approached the next man in line.