Excerpt: At the Walls of Sinnlos by Michael R. Fletcher 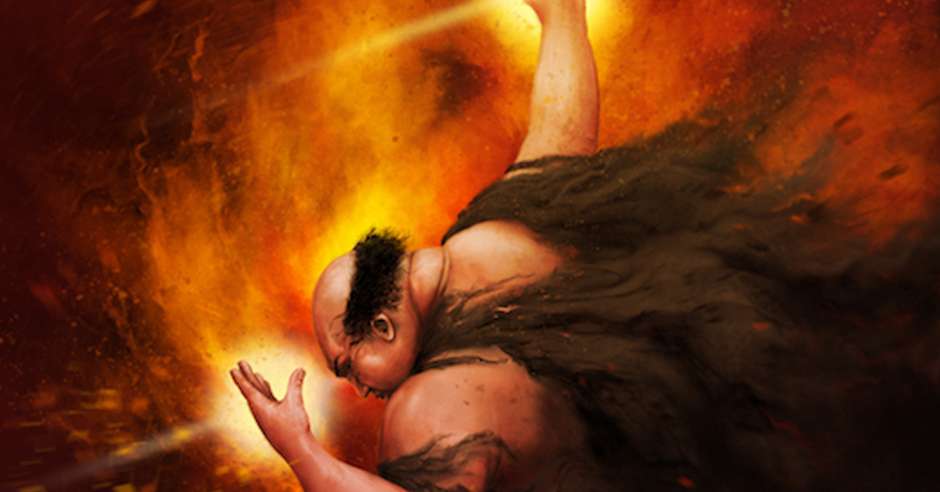 After reading Michael R. Fletcher’s Beyond Redemption, I immediately approached the author to see if we could nab a short story for you. We were lucky enough to grab a polished-up version of one of the original Manifest Delusions short stories Fletcher used to develop his story.

If you haven’t grabbed Beyond Redemption, do yourself an epic favour and go grab it. It’ll be one of the best grimdark books you’ll read all year. For now, enjoy this excerpt of At the Walls of Sinnlos. You can grab the rest in Grimdark Magazine Issue 6, available in Kindle, ePub and PDF through our webstore, and through the Amazon Kindle Store.

At the Walls of Sinnlos

I rode at the Captain’s side, sweat pooling in the folds of my fat and soaking my shirt. I watched him from the corner of my eye. He sat slumped in the saddle, his once crisp, blue uniform crimson with the blood-red dust of the Sinnlos Desert. My heart broke and I had to look away. His parents had died the day we rode from Grauschloss, slain in the Theocrat’s latest cull of the old-guard families. Their lands and holdings confiscated, the Captain’s entire family were hung in the traitors’ cages to starve and rot. We’d ridden past them as we left the city; he hadn’t spared them a glance. He dared not. Had they not disowned him when he’d joined the ranks of the Theocrat’s army, he would have shared their fate. But years of impeccable service did not lift him above suspicion. Trust is something the Theocrat commands and demands, not something he gives. I couldn’t help but think the Captain had been sent to Sinnlos to die. I knew why I was here but dared not share that truth. My silence felt like betrayal.

I knew the Captain’s sins as he knew my own. Sometimes I think our friendship was based on that knowledge more than anything else. How could either of us judge the other without condemning ourselves? Not that we didn’t condemn ourselves. Far from it. Much as I loved him, I was contemptible. Beyond redemption.

Belief defines reality, and the beliefs of the deranged can be truly dangerous. We, the broken, could believe something so utterly it altered reality. The mental instability that was my source of power made me the ruin of a man I am today. The Theocrat found use in that ruin. He fed that ruin, reminding me of my crimes, fuelling my self-hatred, to make use of the manifestations rising from my insanity. In those moments when I was not in sway to his power, I loathed the man. I wanted to punish him for his casual manipulation of my emotions.

I wanted to burn.

The rest of the time I loved and worshipped him. It made thoughts of treason difficult. Almost impossible.

The Captain’s horse looked more depressed than its rider, who examined the blackened fingertips of his left hand as he rode through the blowing bloody dust. The once proud warhorse dragged hooves that seemed too heavy to lift. Its back sagged where it had previously been ramrod straight. Its saddle and skirt were caked red with sand and horse sweat and chafed the poor beast’s sides raw.

Behind us strode a platoon of Dysmorphics, massive parodies of physical perfection. Muscular arms and legs, thicker than many trees, pumped in perfect unison as they kept pace with our exhausted horses. Watching their eyes dart as they measured themselves against their comrades, I imagined their thoughts: Are his arms bigger than mine? Is my left leg more muscled than my right? Do I look lopsided? I’ll have to work on that when we break for camp tonight.

Small minds in big bodies. At least that’s what I told myself. It was unfair that they might manage such bodies and intelligence while I fell well short of brilliance and was both fat and ugly.

These men weren’t under the Captain’s command; they merely followed us as we marched to meet with the army already surrounding Sinnlos. Unlike myself, the Captain had left Grauschloss with a distinct lack of orders. My own orders were twofold. I was to spy upon my only friend, watch for signs of disloyalty, and deal with him should the need arise. Finally, if all else failed, I was to turn my Hassebrand powers against the Empress of Sinnlos.

But I had plans of my own.

The Empress was the one person who could challenge the Theocrat’s iron grip on the hearts and minds of his subjects. As long as she lived the Theocrat would know he wasn’t untouchable and that fear would temper his choices and actions.

I think the Theocrat wanted the Captain to fail this test. Or was this a test of my own loyalty?

I ran a hand across my bald pate and through its greasy fringe, all that remained of my black hair. My hand came away dripping sweat and gritty with russet sand.

For a moment I thought he hadn’t heard me as he continued to stare at his fingertips. Finally he looked up, turning lifeless grey eyes in my direction.

I nodded at the hand he held before him. ‘Is that…’ I couldn’t finish the question. The Captain had been depressed for so long I could barely remember what he used to be like. I had long worried he might become suicidal.

‘I think so,’ he said, his voice devoid of emotion.

‘So far.’ He rubbed fingertips with a greying thumb. ‘I’m numb.’ He twitched the hint of a smile. ‘It’s numb,’ he corrected.

‘Oh.’ What else could I say? That I was sorry? What good would that do? Could I offer him my love and support?

I opened my mouth to extend what comfort I could and the Captain turned away. He gestured forward with blackened fingertips. ‘Sinnlos. We’ll reach the wall by nightfall.’

I squinted through the swirling sands and made out the towering walls. Not surprising I hadn’t noticed them; they were the same gods-awful red as the blowing sands.

I had been right, the Captain was suicidal. What I hadn’t foreseen was how that desire would manifest. He didn’t merely desire death—he craved the punishment implicit in a slow, rotting death. The Captain, whom I once would have sworn was a pillar of sanity, was a Cotardist. He’d surrendered all hope and was decaying before my very eyes. I swallowed my helpless anger.

I dared no unchecked emotion.

I had wondered if the Captain regretted abandoning his family to serve the Theocrat.

I had my answer.

Behind us the Dysmorphics sang songs of blood and plunder, stomping and clapping in time to their chants. They too had spotted the distant walls. Their songs failed to lift my spirit. Judging from the grim look on the Captain’s face they didn’t do much for him either. Behind those towering walls lurked the Empress of Sinnlos, a Delusionist of great power. How would her delusions manifest?

When all else failed, when armies lay shattered and dead, I would be called to face her, the Delusionist Empress of Sinnlos. Me. Gehirn Schlechtes, Hassebrand of the Theocrat’s cadre of the dangerous and deranged. If my will held strong I would turn my back upon my Theocrat and do what I must to keep her alive. Then and only then would I allow myself emotion.

And I would burn the Theocrat’s army.

Find out if the Theocrat’s army burns at the hands of a madman in Grimdark Magazine Issue 6, available in Kindle, ePub and PDF through our webstore, and through the Amazon Kindle Store.