Back in the late nineties, author J.V. Jones released A Cavern of Black Ice, book one of the Sword of Shadows series. She is said to be one of the early writers of gritty fantasy (let alone female authors) alongside George R.R. Martin, who released A Game of Thrones in 1996. Her popular four-book series last saw a release in 2010 and is yet unfinished, with the fifth book rumoured to be in progress.

Fast forward to 2018, and when you think of grimdark fantasy it’s often the male writers who first come to mind. However, there are a number of female authors smashing grimdark fantasy right now – here’s my top five. 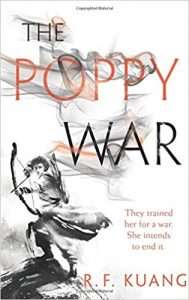 The Poppy War blasted into the grimdark community’s dark awareness in May this year with some already lauding it as the fantasy debut of the year.

It is set in a Chinese inspired epic fantasy world influenced by the Second Sino-Japanese war and the 1937 Rape of Nanjing. It’s the first book of a trilogy with book two currently in the works.

R.F. Kuang, in a post on Goodreads stated that this book… “is not a romance story” or “a YA fantasy school story” and that “if you’re turned off by violence” then you should probably “pick up a different book”.

Fucking hell! If you’re a lover of dark books with dark themes then this one should definitely be top of your list. 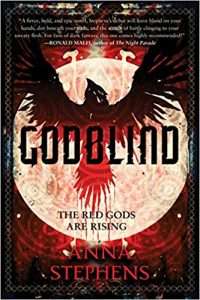 Let’s rewind to the heady days of June 2017, when two Annas hit the grimdark fantasy scene. The first Anna on this list, Anna Stephens, released her debut novel Godblind about bloodthirsty gods and their gloriously ruthless return to the world.

Godblind was hailed as not only having one of the best covers, but also as containing one of the most gruesome and eye-watering torture scenes in recent times. One which no doubt prompted every guy reading this book to wince and cross their legs. Ouch.