Get some grimdark spirit in your Dungeons and Dragons game

Hello, my name is Fabienne, and I am a Dungeon Master. Or a Dungeon Mistress, as the case may be. Don’t worry, nothing sexual, we are talking about Dungeons and Dragons, the pen and paper tabletop roleplaying game. Today I am here to talk to you about how you can get some of that grimdark spirit from your favourite books by authors such as Joe Abercrombie, Brian Naslund or Matthew Ward into your own campaigns without having to leave your living room! 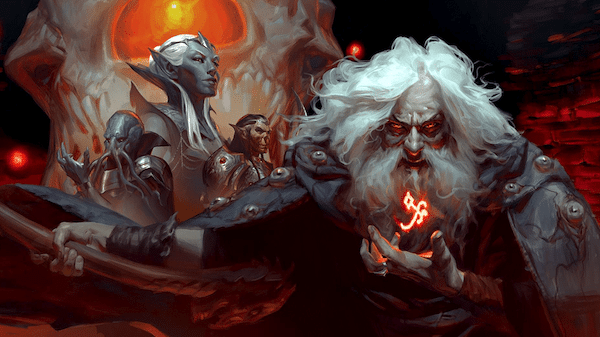 Sorry to break it to you, but sunshine ain’t going to cut it. It’s hard to project dark and gloomy when the sun is out, the weather is pleasant, and your characters don’t have to face any environmental obstacles. Miserable weather will lead to miserable characters and a tense party. And ultimately, that is what you want for your perfect grimdark campaign. Make your world foggy, wet, or brutally, relentlessly hot with no shade to be found. Just like us dwellers of the British Isles, your characters will be beaten down and hopeless. Not only that, but use the landscape of the world to your advantage. Make it hard for the characters to find shelter, expose them to the elements and make their lives miserable on campaign.

Introduce an element of madness

D&D fifth edition has a wonderful mechanic element of madness. Well, wonderful for the DM, less so for the players. Figure out a way to have external factors induce levels of madness in the characters and you are in for a slew of curses and chaos. The early levels are temporary, but as they stack up, they become permanent, which can lead to interesting scenarios. For example, back when I was a player, one of my characters ended up with a level three madness condition, which is permanent and rolled out on a table, which made her crave alcohol to feel sane. Problem was, the party was stuck in an underground cave system with nothing alcoholic anywhere to be found. If that’s not Grimdark I don’t know what is.

In the middle of the game, change the basic rules of life in whatever realm you are setting your game in. Have a coup happening, have a tyrant change legislation, or invent some other reason why the stakes are changing. For any reason of your choosing, without knowledge of your players or their characters, the legal situation has changed utterly. Their behaviour is now no longer acceptable, and they keep doing things wrong and don’t know why. They are suddenly morally reprehensible to the rest of the land and no longer considered adventurers to be admired and helped. This allows you as the DM to introduce all kinds of shenanigans and obstacles for them and forces your players to come up with very creative solutions to get out of these problems. And really, that is exactly what would happen to a set of adventurers in a Grimdark novel!

Let there be dragons

It wouldn’t be Dungeons and Dragons if I wouldn’t suggest introducing some of the titular creatures. A fully grown dragon is overpowered for most parties if the goal is to slay it, so have it wreak havoc and scare your characters into submission. It should be much more fun to force them to come up with tricks and creative solutions to trap or defeat a dragon, or even to spot and identify it rather than make them fight and kill it – or use it as a tool for a TPK (total party kill), the most grimdark of all endings…

I know it’s hard to hurt your player’s characters. I know it’s tempting to fudge rolls so enemies don’t hit characters that are already on the verge of dying. But in a Grimdark world, hope is hard to come by and people die unexpectedly. If your characters are not actually at risk of permanent death, you risk lowering the stakes for your players, which leads to a loss of tension in the game, and thus a boring campaign. But if they are aware that they could die at any moment, they will be paying much more attention, and play every session in fear for their character’s lives, ensuring that the Grimdark spirit remains fully present.

Get started on your grimdark Dungeons and Dragons campaign