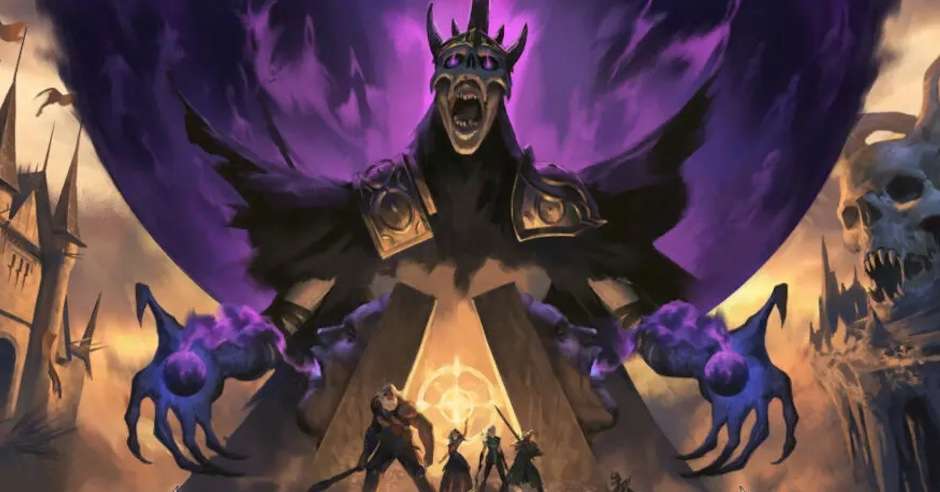 Board and tabletop gaming has seen a rise in popularity over the past ten years or so, with more people coming into the hobby and greater numbers of projects finding their way to the table through crowdfunding sites like Kickstarter, Indiegogo or Gamefound. Tabletop gaming has a great breadth of styles, themes, mechanics, and genres to satisfy all sorts of tastes and experience levels. Every year there are conventions and expos across the globe attracting 1000s of visitors a day; one such event is the UK Games Expo, held in Birmingham, UK (pandemics permitting), over the first weekend after Whitsun (or the Late May Bank Holiday). I attended and kept my eye out for games on the darker end of the spectrum so that I could draw together five grim games to tempt you with, in no particular order.

Book of Skulls: Slayers of Eragoth Described by our very own Matt Davis as “HeroQuest got all growed up and went metal”, Book of Skulls: Slayers of Eragoth is an ambitious dungeon crawler with its own soundtrack of, you guessed it, heavy metal. Soon to be looking for crowdfunding, this is a big game with lots to do and investigate. Besides the soundtrack, the game also features interesting mechanics, brilliant art, and one of the heroes is called Rei (OK, it’s spelled differently, but it’s pronounced the same: I can dream, can’t I?).

Each time your party fights the forces of evil the other player(s) are controlling the enemy and, when it’s their turn to slay through the hoards, it swaps, and you control the enemy forces. This is a nice little mechanic to minimise downtime between your turns. With 120 demons in the Book of Skulls and over 150 character cards, you’re going to see a lot of replayability over the 10 possible maps.

Book of Skulls: Slayers of Eragoth is currently in Prelaunch on Kickstarter and you can listen to some of the soundtrack already on their website: https://www.bookofskulls.co.uk/

Coming from Ex Stasis Games, Last Night on Earth is an RPG “about making every moment count” as you live through your last night as a human. You are becoming a monster, literally, and you have unfinished business to attend to before you can no longer recognise yourself. It’s a tough balancing act as you try to settle your burden before its too late; if you push yourself, you embrace your monstrous nature and your time runs out faster, but if you don’t push it, you won’t lay your burden to rest.

Characters will die. Betrayal is part of the game. Violence and corruption are rife in a decaying world. This is a horror RPG in which you/your character is, put simply, “going to confront some shit”.  These characters are living their last night and trying to make sure their lives had meaning. There’s not going to be some handily placed MacGuffin to stop the impending doom; no cures, or magic reverso spells, just the last few hours before you succumb to your curse.

Last Night on Earth is available digitally through itch.io and their website: https://exstasisgames.com/