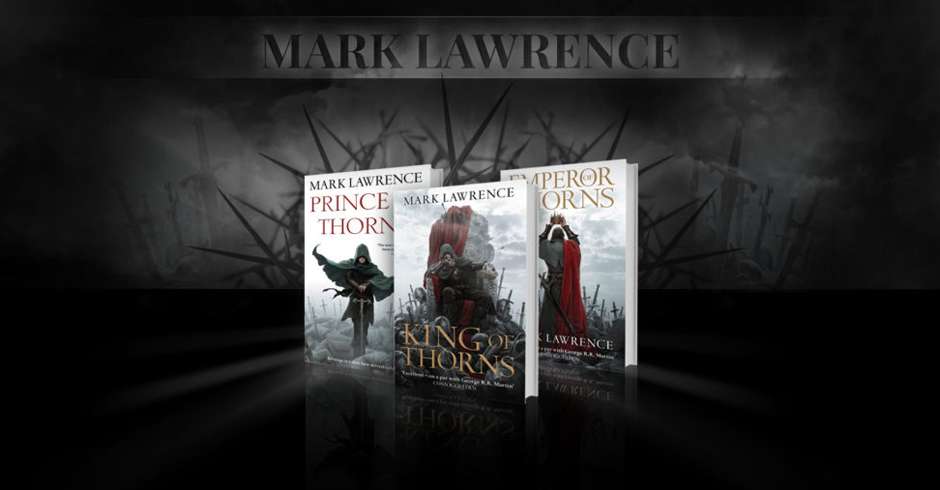 As well as providing an awesome Broken Empire short story for Grimdark Magazine’s first ever issue, Mark Lawrence was good enough to chat to us about grimdark, short fiction, Broken Empire, Red Queen’s War and more.

[GdM] The Broken Empire is a cracking read, darker than dark, making us love people we probably should not. You’ve shown a skill few authors manage in achieving that and made yourself a stalwart of the grimdark genre. We can’t wait to see where The Red Queen’s War takes us over the next few books.

[GdM] What does “grimdark” mean to you?

[ML] To be honest, I don’t know what it means. My first encounter with the term was seeing it used as a pejorative to belittle certain books. Since mine were the only titles it was aimed at that I had actually read, that didn’t leave me a lot to build on in order to construct a definition. If you ask people you’ll get a great range of very different answers, from “this thing I don’t approve of” to “this thing I like”.

I even made a blog post on the subject!

[GdM] What do you like to see in fiction and why?

[ML] That’s a very big little question! I guess the only useful answer is to say how what I like might be unusual or at odds with the majority, because obviously I like to be entertained in a diverse collection of ways just like any other reader.

I like an intellectual side to what I read, though I don’t demand it. I don’t like message-fiction. I’m not interested in being “educated” in the politics of the author or steered toward an opinion. I do like to see the power and beauty of the language exercised … Most of all I guess I want a book that will engage me on an emotional level – a book with heart.

[GdM] What do you like about writing short fiction? What short works can we expect to see from you in the coming year and where can we get them?

[ML] From the writing side there are many benefits to short fiction, all balanced by the fact that it’s very hard to sell – if that’s important to you.

A short story is (unsurprisingly) a relatively short commitment both for the writer and the reader. You can afford to fail in a short story. If you write a book that fails then it might be the last book you publish. Readers of that book may not return to you. If you write a short story that misses the mark you can try again. This allows more freedom to experiment – you tend to hit higher highs, or lower lows. It’s exciting and freeing.

I’m hoping to add to the short stories I’ve already written about Jorg and various of his road brothers.

I make it a goal that each short story I write should entertain a reader who has never read anything else by me. Clearly there will be extra pay-off for those who’ve read the trilogy, but when I write a short story it’s for “every” reader. Without that ethos they would be extra chapters or add-ins, rather than stories in their own right.

Broken Empire short fiction is fun to write and (I hope) fun to read. It allows me to explore all sorts of avenues and background that would have spoiled the focus and pacing of the main story if included but that are potentially very rewarding for readers who have fallen in love with the characters and ideas within that main story.

With all this in mind I’ve crafted a collection of short stories and plan to produce more. Initially they’ll appear in various anthologies and magazines, but in the fullness of time as the rights revert I want to bundle them together and offer them on Amazon. That’s quite a long term thing though.

[GdM] Which authors who write grim stories in dark worlds do you like to read and why?

[ML] I’d put George R.R. Martin and Robin Hobb at the top of my list, and I’ve been a big fan of David Gemmell for a long time, and of Michael Moorcock for even longer.

Peter V. Brett is a more recent discovery and favorite. I’m a fan of Daniel Polansky’s Low Town Trilogy. Plus in the last 18 months or so I’ve read debuts by Scott Lynch, R. Scott Bakker, Anthony Ryan and Brent Weeks and enjoyed those a lot.

[GdM] Apart from both being young men, there are very few things similar between the Jorg and Jalan. How hard was it to break away from the viciously ruthless Jorg and move on to his polar opposite?

[ML] You say that, and the vast majority of people agree with you, but I have read reviews that claim they’re very similar and that Jalan is just a failed attempt at Jorg. Which seems to me to say that there are readers who’ve had a much harder time moving on than I did.

I found it really quite easy. I don’t have to fight some over-riding urge to have my characters stick a knife into the eye of everyone they encounter! I finished writing Jorg’s tale early in 2011 and started writing Jalan’s late in 2012, so I had very nearly two years to recover, if any recovery were required.

I find writing from a first person perspective requires fewer mental leaps – you find a character, you stick to it. To do something in the third person, like George Martin’s A Song of Ice and Fire, with so many brilliantly realized and quite different characters seems far more daunting. That man has to put himself in a great many different pairs of shoes and not let one contaminate the other.

[GdM] Jorg is the darkest character I’ve read to date. Who or what inspired you to create him?

[ML] Jorg’s character, if not his circumstances and story, was inspired directly by Alex in Anthony Burgess’s famous novel of 1962, A Clockwork Orange. That’s where Jorg’s violent, ruthless, intelligent, charming and amoral nature rises from.

[ML] I’m not a planner, so no, I’ve nothing planned. I don’t know whether there will be further books set in the Broken Empire or not. There are pros and cons to both options.

Good stories don’t necessarily require a grand stage. You could write the best book ever without the action leaving the confines of a small town. I’m half way through the final book in the Red Queen’s War Trilogy – what comes next I can’t say. Ahead lies that interesting point where I sit in front of a blank screen and wonder whether to type to it, and if so … what?