Review: When the Heavens Fall by Marc Turner 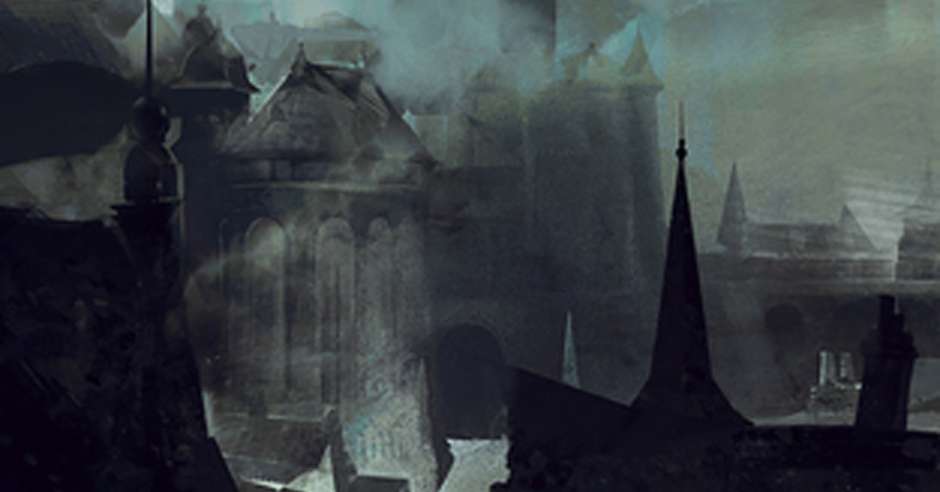 Can traditional high-fantasy be grimdark? Apparently, yes. Marc Turner’s debut novel When the Heavens Fall showed me that fantasy can be saturated with magic without losing any of the grit. It manages to deliver an old-school quest narrative without succumbing to the clichés and stagnation that drove me away from classic fantasy and in to the loving embrace of grimdark. 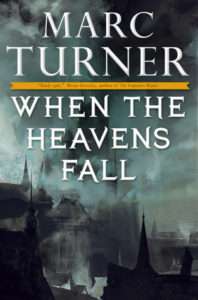 Mayot Mencada, a necromancer, has stolen the Book of Lost Souls and unleashed death magic to blight the land. This focus of power attracts all manner of gods, monsters, and mortals, some hoping to claim the power for themselves and others simply seeking to destroy it. Luker, a pragmatic magical warrior, only hopes to find some sign of his old master, who disappeared tracking Mayot down. Romany, the self-indulgent high-priestess of a shadowy god called the Spider, seeks to manipulate Mayot to her own ends. Ebon, a prince tormented by spirits, only wants to save his kingdom. Finally, Parolla, a young woman cursed with a darkly magical lineage, seeks to use the Book of Lost Souls as a gateway into the underworld itself. Each of these four separate strands hurtles together, telling different sides of a story that comes together in an explosive climax.

On the surface the plot may sound like the same sort of thing we’ve all heard a thousand times, and yet, Turner manages to put a spin on it that kept me interested until the very end. The world is dark, the morality ambiguous, and the characters grey. High fantasy is given a grimdark twist and the best of both is brought to the table. Turner’s magical world let me recapture the sense of wonder that drew me to fantasy as a child without sacrificing maturity, which is no mean feat.

Luker, Romany, Ebon and Parolla all feel like real, flawed people and they’re easy to connect to. Each of them, barring Ebon, is involved for selfish reasons, and a lot of innocents get hurt along the way. Even Ebon, with his seemingly heroic motivations, is a tortured and troubled man just trying to do what he believes is right. Each main character is supported by a well-developed secondary cast, many of whom become highly memorable, such as Jenna, a hard-drinking, hard-fighting assassin who presents surprisingly vulnerability at times. The point of view switches frequently but I found that there was no character I ever wanted to skip over. Each brings something new to the table and provides a different insight into the world Turner has created.

Magic seeps out of every crack. Living gods bicker, monsters lurk, and every detail leaves you feeling as if absolutely anything could happen next, yet everything feels like part of a coherent whole. Even the deities are decidedly human and there are multiple layers to everything that’s going on. The book focuses on necromancy, and while this is used a lot in fantasy Turner managed to give it an original spin. In his world, the undead aren’t shambling monsters, but rather entirely normal people with all of their mental faculties, except for the fact that they are utterly controlled by the necromancer. This makes for some interesting confrontations with friends who have died only to be enslaved as undead, all too aware of what they’re being forced to do but powerless to stop it.

The world has a living, breathing history that manages to convey itself without becoming irrelevant. Intriguing little titbits are snuck in as natural extensions of the plot, coloured by the views and voices of the characters. There are very few, if any, annoying exposition dumps, which I found to be a blessing. With warriors, mages, monsters, ancient civilisations and warring gods, it feels like Dungeons & Dragons, or a series like the Belgariad, but all grown up. The book managed to both make me realise how horrifying a magical world would be, while somehow simultaneously making me want to live there.

Despite the mountain of positives, it took a long time for the plot to really take off. For the first quarter we spend time with our four protagonists getting to know them and their worlds, and while it’s all quite compelling it didn’t keep me obsessively turning the pages like some books do from page one. I found myself asking “is this all going to pay off at the end?”

It does. By the time I’d finished the whole book, every character arc or plot point brought up early on had reached a climax, and I retroactively appreciated everything. Despite When the Heavens Fall being the first instalment in The Chronicles of the Exile, the book is a self-contained story and the climax is as satisfying as you could ask for.

Something particularly noteworthy is Turner’s treatment of gender. Half the point of view characters are women, and it never feels as if they’re playing second fiddle to the men. Each woman is a three-dimensional, well-developed character in their own right. I enjoyed relationships such as Jenna’s friendship with Luker, which works great as a platonic friendship but with possibilities of something more underneath. For me, it didn’t even matter whether there was any romantic feeling as they have a beautifully written camaraderie that transcends love without shunning it. Platonic relationships across genders are something that I don’t think we see enough of and it was great to see one done so well.

Turner’s style has been rightly compared by many to Steven Erikson and Joe Abercrombie. He switches point of view frequently, but I never found myself wondering whose head I was in as each character has a distinctive voice. Turner’s writing is impressively economical and I felt as if every word I read propelled me forwards. He doesn’t get bogged down in unnecessary backstory or world-building, and everything introduced is relevant in some way to the main plot. Action is frequent and well-written, and Luker’s fight scenes were particularly fun to read since he has a telekinesis ability akin to the Force in Star Wars which, used creatively and blended with swordplay, makes for some thrilling combat. Most of the fight-scenes are about finding a creative solution to beat the opponent and they read more like chess-games rather than two people simply hitting each other, and as the plot progresses and the stakes get higher the fights become more desperate and captivating.

All up, it’s a good read that offers to scratch a different itch from most grimdark. If you want a novel that harkens back to classic fantasy without sacrificing any of the grit, Marc Turner’s When The Heavens Fall is for you.

Read When the Heavens Fall by Marc Turner