I was introduced to New Zealand based artist Scott Base’s Bad Space Comics when I was mindlessly scrolling Facebook one night and saw the below image. 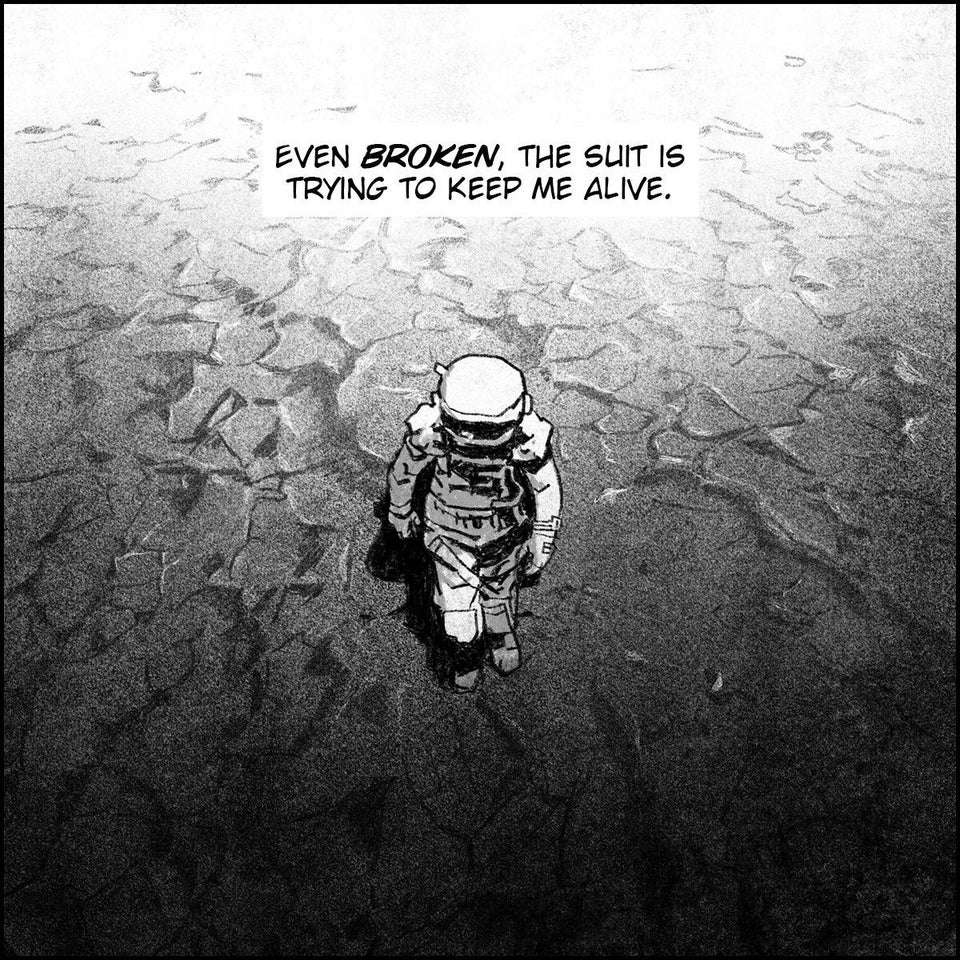 Immediately hooked, I went through the story panes and as the horror grew, became more and more obsessed. This particular story, The Suit, brilliantly provides enough context to assume the technological period puts this story far in the future, while also using that technology to provide a fantastic body horror aspect to the story. The Suit tells a gripping story in 10 panes, with short, punchy commentary quickly driving what’s a simple yet thoroughly enjoyable story forward. A theme of asking at what point should we stop using technology to prolong life is an incredibly interesting one–and if you’ve ever watched somebody slowly deteriorate physically and mentally while being kept alive in a miasma of drugs while beside a hulking, beeping machine, it’s one I think that will hit home. This is matched with an excellent somewhat scratchy greyscale / charcoal style approach to the art, which I am a massive fan of.

Having loved The Suit, naturally I immediately checked out the other five stories the artist had available: The Billionaire, a story about an astronaut, Ghosts of Future Past, about a time traveller, Invasion Day, where one country’s mismanagement of the environment leads them into conflict, After Life, which is a kind of commentary on religion, and Old Gods, which tackles the question of a greater being/s influence on humanity.

One of the really cool things I like about Bad Space Comics is the face value story you can glean and take away from each comic, and then the deeper themes Base has written in behind each story. The artist’s bio reads, “Love comics. Love science. Less fond of the rich maggots killing our planet.” and you can see those themes of environmentalism, hopelessness, capitalism, and rebellion in his works, amongst others.

Now, I’ve left my descriptions of the stories as brief and spoiler-free as possible because I’d much rather you go see the comics for yourself than I ruin them for you. And I haven’t featured any other art pieces (apart from the website header, below) because, again, I’d rather you go to the artist’s website and check it all out.

The website is in its infancy, so you’ll only need about 10 minutes to read them all, but do yourself a favour and haul arse over there. You don’t need to be a comic book fan to appreciate a short story well told visually.

Head over to Bad Space Comics

Click on the image below to head over to Bad Space Comics by Scott Base.