How to Make a Grimdark Setting 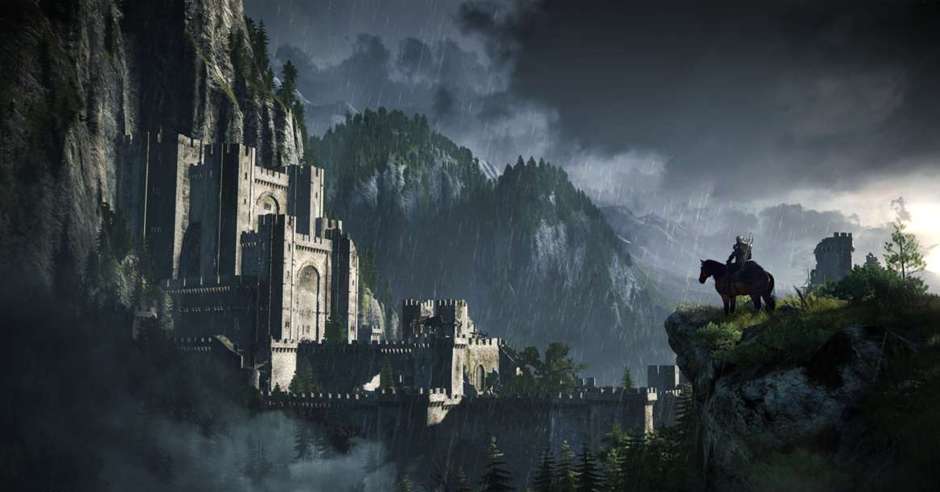 I’m a huge fan of Andrjez Sapkowski’s The Witcher novels. While most fans are familiar with the series through CD Projekt Red’s video game trilogy, the novels are an excellent grimdark series of their own. Most reviewers focus on the grim Clint Eastwood-esque protagonist, Geralt, who is a quintessential anti-hero that follows his own code of honor, but I believe it is actually The Witcher’s setting which makes the series a classic. I’m going to go over much of the world’s appeal in terms of its people, politics, war and development to show why it’s a great basis for authors to draw from when crafting their own gritty fantasy setting.

The books take place primarily in a region of Polish mythology-influenced kingdoms called the North before gradually expanding to include the territories of the Nilfgaard Empire to the south. Our first introduction to the North in The Witcher short story paints a grim picture as Geralt is nearly lynched simply for being a stranger from another kingdom entering a bar.

“There’s no room to be had, you Rivian vagabond,” rasped the pockmarked man, standing right next to the outsider. “We don’t need people like you in Wyzim. This is a decent town!”

The outsider took his tankard and moved away. He glanced at the innkeeper, who avoided his eyes. It did not even occur to him to defend the Rivian. After all, who liked Rivians?

“All Rivians are thieves,” the pockmarked man went on, his breath smelling of beer, garlic and anger. “Do you hear me, you bastard?”

Geralt ends up being forced to defend himself against the mob brought about by simple drunkenness, racism and boredom. The first impression of the Northern people are of a hateful, violent and paranoid bunch who have few redeeming qualities. Indeed, Geralt only avoids being hung by the legitimate authorities for defending himself because he’s there on business as a monster-hunter. He is in Temeria to kill or break the curse on the princess of the region, only to find out her condition is the result of the king’s own unnatural relationship with his sister.

Aside from drawing comparisons to the Lannisters in George R.R. Martin’s A Song of Ice and Fire, it’s interesting to note that King Foltest actually turns out to be one of the more heroic monarchs of the region. Future monarchs show themselves to be cowards, murderers, oath-breakers and causally cruel. Thus, Sapkowski plays with the reader’s expectations and increases the story’s intrigue by giving a character conflicting traits – that is, possessing a great weakness as well as an unexpected virtue. In the short story The Bounds of Reason, King Niedamar, after a failed attempt to slay a dragon to fulfill the prophecy necessary to marry a nearby princess, decides to screw heroism and simply take what he wants by force.

“I don’t give a shit about the people there, as Sir Boholt would say,” Niedamir laughed. “The throne of Malleore is mine anyway, because in Caingorn I have three hundred armoured troops and fifteen hundred foot soldiers against their thousand crappy spearmen. Do they acknowledge me? They will have to. I’ll keep hanging, beheading and dismembering until they do. And their princess is a fat goose and to hell with her hand, I only need her womb. Let her bear me an heir, and then I’ll poison her anyway. Using Master Sheepbagger’s method. That’s enough chatter, Gyllenstiern. Set about carrying out my orders.”

“Indeed,” Dandelion whispered to Geralt, “he has learned a great deal.”

“A great deal,” Geralt confirmed, looking at the hillock where the golden dragon, with its triangular head lowered, was licking something grey-green sitting in the grass beside it with its forked, scarlet tongue. “But I wouldn’t like to be his subject, Dandelion.”

This unsympathetic portrayal of the North’s people from top to bottom is a consistent feature throughout the stories. It allows Geralt, a decent man if not a nice one, to be isolated from his fellow man as well as forced to be the one voice of what passes for justice. Even so, Sapkowski upends this portrayal with the arrival of Nilfgaard who causes us to want the North to survive even if they are a bunch of assholes. This is similar to how Joe Abercrombie made the Union appear likeable just by making their enemies, the Gurkish, seem so heinous.

In the short story Something More, Dandelion, Geralt’s frequent traveling companion, describes them in such horrifyingly overblown terms that their presence casts a pall over the rest of the series.

“Not this war, Geralt. After this war, no-one returns. There will be nothing to return to. Nilfgaard leaves behind it only rubble; its armies advance like lava from which no-one escapes. The roads are strewn, for miles, with gallows and pyres; the sky is cut with columns of smoke as long as the horizon. Since the beginning of the world, in fact, nothing of this sort has happened before. Since the world is our world… You must understand that the Nilfgaardians have descended from their mountains to destroy this world.”

The conflict with Nilfgaard seems to be staging one of the “gray” Northern kingdoms against the explicitly evil Nazi-like Nilfgaardians. Except, the very next book, Blood of Elves, disputes such a simplistic good-versus-evil interpretation. The Nilfgaardians have been driven back and Dandelion tells of the North’s victory but the population can’t agree on any of the details. We also get the sense not everyone is happy with the North’s victory.

“As everyone knows,” he continued, sparing neither the baron nor the wizard so much as a glance, “over a hundred thousand warriors stood on the field during the second battle of Sodden Hill, and of those at least thirty thousand were maimed or killed. Master Dandilion should be thanked for immortalising this famous, terrible battle in one of his ballads. In both the lyrics and melody of his work I heard not an exaltation but a warning. So I repeat: offer praise and everlasting renown to this poet for his ballad, which may, perhaps, prevent a tragedy as horrific as this cruel and unnecessary war from occurring in the future.”

“Indeed,” said Baron Vilibert, looking defiantly at the elf. “You have read some very interesting things into this ballad, honoured sir. An unnecessary war, you say? You’d like to avoid such a tragedy in the future, would you? Are we to understand that if the Nilfgaardians were to attack us again you would advise that we capitulate? Humbly accept the Nilfgaardian yoke?”

This is, again, similar to Joe Abercrombie’s handling of the Gurkish with sincere peace envoys sent after the fall of Dagoska (ones which Bayaz’s agents frame for murder). There are people in Nilfgaard who would be willing to be magnanimous in victory even as there are people on the North’s side who scheme and desire a second round of ruinous war.

Things become further muddled in the subsequent Second Nilfgaard War as the North is divided among those who are willing to fight for the Northern kingdoms against those allied with Nilfgaard. The majority of Nilfgaard’s allies are the Scoia’tael (elvish for “Squirrels”) who seek to redress ancient wrongs. Rather than lionize a struggle for equality, Sapkowski treats