Is Dune a worthy adaptation of its lofty source material?

Dune comes with a lot of baggage and high expectations. For a start, it’s based on one of the most critically and commercially successful science fiction novels of all time (whether it is grimdark or not is something I’ve tackled before). 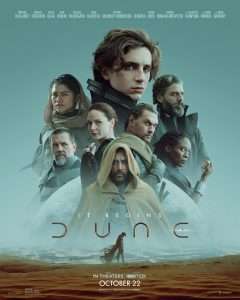 Even more weighty is the fact that previous attempts to film Dune have resulted in multiple failures (one eventually producing the fascinating Jodorowsky’s Dune documentary,) a flawed and divisive motion picture by David Lynch and an often overlooked Sci Fi channel TV series.

To face that challenge is acclaimed director Denis Villenueve, who’s career since hitting Hollywood has seen a string of beautiful, emotionally resonant films such as Sicario, Arrival and Blade Runner 2049. From that CV we know he can handle high concept sci-fi, work with an existing IP and wrangle an ensemble cast.

So, does Dune meet the challenge? Is it a worthy adaptation of its lofty source material or does it fall prey to the hazards that befell its predecessors?

Let’s start with how the plot of the book is adapted. The first important thing to say, which won’t be a surprise to anyone who has been following the production is that Dune is a duology, with the second half of the story to follow in 2023.

While this leaves everything very much up in the air and unresolved at the end of the film, it does allow the rich world building and nuances of character to play out in ways that the Lynch version couldn’t afford (of course, more time to lean into the weirdness might or might not have been a blessing with Lynch).  That extra running time allows a lot of the book to be included and while I can see where pieces have been moved around or scenes combined it’s an almost entirely faithful adaptation.

One slight change is in how two characters meet their fates, but it’s done in such a way that allows a neat exposition of information that partly comes from the novel’s appendices and gives a suitably heroic death to both characters.

I’m a little surprised there’s no visualisation of the Navigators folding space–a notorious highlight of the Lynch version–just some lingering shots of the massive Spacing Guild ships to give a sense of scale, and the weirdness of the Navigators isn’t really seen in the film.

Elsewhere I might have liked to have seen the dinner scene in Arrakeen or Jessica discovering the greenhouse but these are hardly key moments and their major import is moved to more economic scenes.

Dune is a movie that feels very much about pace. It’s slow and measured but feels weighty, with no wasted screen time despite running over two and a half hours. There is a sense of events being important but also driven by a momentum that is far more than the actions of the characters. It’s almost… doomy.

We linger on Caladan–homeworld of the Atreides–for far longer than I’d expect, but that is effective in two ways. Firstly, it allows more interaction between the various family members and retainers and secondly it allows a distinct visual contrast between moisture rich Caladan, all mist shrouded grey / greens and arid Arrakis, all sand colours and harsh light. The glimpse we get of the Harkonnen homeworld, Geidi Prime offers another aesthetic, damp like Caladan, but sickly rather than verdant, with a stark black and white palette.

This is a visually stunning film. With moments of genuine awe mixed with a sense of great, elaborate detail. The way that spaceships land is deeply unsettling, as giant vehicles seem to move without respect of inertia, which is another example of how this movie uses pace and momentum to great effect. The attention to detail with uniforms, the styling of the various factions and so on is delightful.

There is some delicious brutalist architecture in Dune and it tallies with the styling of the ships to feel like it’s profoundly influenced by 70s sci fi artists like Chris Fiss, John Harris and Robert McCall, but with a 21st century sheen. Again, this styling adds to the sense of weight with the greater works of humanity bein