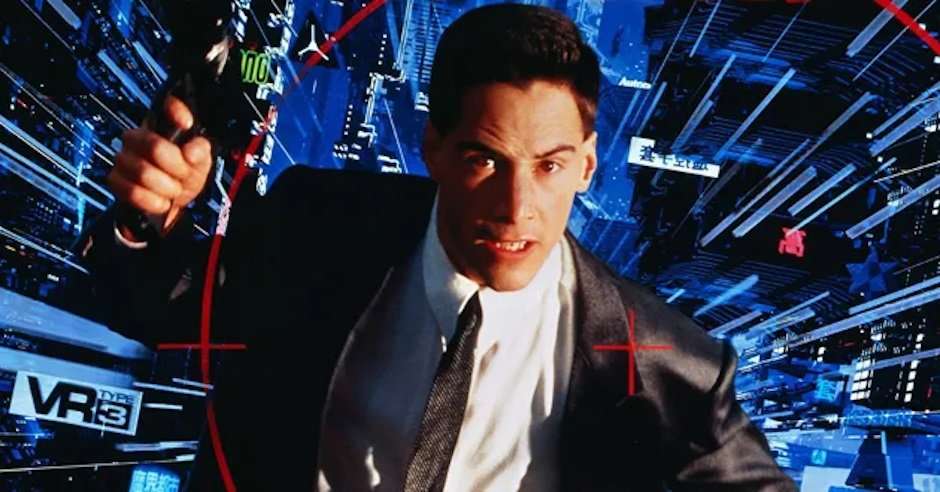 I can’t help but think about all the wonderful cyberpunk movies I’ve watched over the years: Robocop, Strange Days, Cyborg 2 (okay, that’s more of a guilty pleasure but so is this). The hands down most cyberpunk of all cyberpunk movies, though, has got to be Johnny Mnemonic. It not only was written by William Gibson but was screwed with by a bunch of soulless corporate suits so it has the cyberpunk pedigree from both sides!

It’s a gonzo sort of movie with laser garrotes, talking dolphins, couriers with flash-drives built into their heads, the Free State of Newark, and cyborgs everywhere. Hell, one of those cyborgs is a transhumanist preacher with a night job as an assassin. This is easily one of the cyberpunk things anyone has ever created and a codifier for many of the concepts to be found inside it. That’s not what I love about the movie, though. No, what I love about the movie is the protagonist: Johnny as played by Keanu Reeves. Why? He is a complete jackass

How else do you describe this speech being spoken with COMPLETE SINCERITY? “Listen. You listen to me. You see that city over there? THAT’S where I’m supposed to be. Not down here with the dogs, and the garbage, and last month’s newspapers blowing *back* and *forth*. I’ve had it with them, I’ve had it with you, I’ve had it with ALL THIS – *I want ROOM SERVICE*! I want the club sandwich, I want the cold Mexican beer, I want a $10,000-a-night hooker! I want my shirts laundered… like they do… at the Imperial Hotel… in Tokyo. ”

Too many movies feel the need to dumb down their content or provide something like, oh, a softening of a character so we root for him. A softening like, say, a conscience or likability or a tragic backstory. No, Johnny is a selfish high-end criminal who is, at one point, perfectly willing to abandon the woman who saved his life in the garbage as she’s dying from a neurological disorder. Johnny is motivated by money and saving his own ass all the way to the end where he’s only willing to do the right thing because it’s probably literally the last thing he’ll ever do on the planet so why not?

The premise is Johnny is a courier who transports data in a cybernetic implant in his head in order to avoid all the viruses and spyware (though that term hadn’t been invented yet) on the net. Johnny had to remove his childhood in order to get this device installed and is eager to get it back. However, he needs to do the proverbial one last job in order to get the money to do it. This leads him to Hong Kong where a group of scientists install a whopping 300+ gigabytes inside his head, which is more than twice his available capacity. Amusingly, that’s a fairly decent-sized chunk for a digital flash drive and we almost are to the movie’s then-far distant future of 2020. It’s not a spoiler to reveal Johnny is carrying the cure for a neurological disease which is ravaging the world. PharmaCon, who made the cure, has decided they’d rather treat the disease than cure it. Which would be a sound business strategy if not for the fact numerous executives in their service have family members dying from it and it’s probably going to kill off most of the world. I dare say, under those circumstances, the Umbrella Corporation is a model of forward thinking. PharmaCon, unlike the Umbrella Corporation, doesn’t have it’s own military and instead has to employ the Yakuza to be their goon squad.

Johnny is accompanied on his quest by Jane (Dina Meyer), who is supposed to be a badass augmented cyborg but manages to spend much of the movie helpless due to being infected with NAS (the aforementioned neurological disease). I am stupidly in love with Dina Meyer and love the character of Molly Millions (who Jane is supposed to be). However, her portrayal in this movie is average at best. The movie makes Johnny a lot tougher than his literary counterpart and lessens the need for Molly/Jane save as a love interest. Which is a shame because she seems like a cool character, albeit one with terrible taste in men.

The movie has plot holes you can drive a truck through like the random appearance of an artificial intelligence who may or may not be Johnny’s mom as well as the fact there’s always a bunch of high tech tribals there to rescue Johnny’s ass. Why does PharmaCon want the research for the cure back if they don’t intend to ever use it? Why don’t the bad guys ever just offer to pay Johnny? Why don’t the scientists just broadcast the cure for NAS from the beginning? These are questions you will ask, right up until you just accept the movie for the illogical set piece for what it is: a sci-fi B-movie guilty pleasure.

The special effects are charming at best, laughable at worse, with the action being less than inspiring. However, the sheer weirdness of this movie is what saves it. Johnny may be an asshole but he’s an understandable one since we all wish we were an ultra-rich douchebag who cares only about himself (or is that just me?). Dina Meyer is sincere with her chara