My Best Friend’s Exorcism by Grady Hendrix is a nostalgic trip to hell and back with best friends, Walkmans, and New Coke. It is as fun as the title suggests.

“She could decide how she was going to be. She had a choice. Life could be an endless series of joyless chores, or she could get totally pumped and make it fun. There were bad things, and there were good things, but she got to choose which things to focus on. Her mom focused only on the bad things. Abby didn’t have to.” 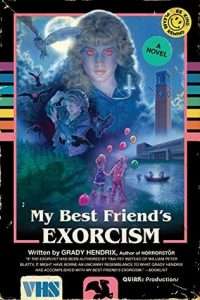 I remember the 1980s. I remember E.T., legwarmers, tall gravity-defying hair, and the mall. I have a picture from 5th grade that is spectacular. All that feels very far away now, as it is 2021. But, just for a moment, Grady Hendrix transported me back to my childhood for a wild ride.

My Best Friends Exorcism follows two best friends Abigail and Gretchen, from the inception of their friendship, during the 4th grade when Gretchen gave Abigail a bible for her birthday at an E.T. themed roller rink party, through High School when their friendship gets much hazier and is tested by literal demonic influence. Abigail, the book’s protagonist, sees life as a before and after. Before Gretchen, and after. The two of them are inseparable. But, after a wild night in a forest with tabs of LSD, Gretchen comes back… different. At first, Abigail can’t figure it out and blames benign things. But there is something dark in the heart of her best friend, and she is the only one who can save her.

“Corn dogs,” the exorcist said, “are all the proof I need that there is a God.”

I have an almost identical set of friendships with a couple of girls I grew up with. We did many of the things that Abigail and Gretchen did. I remember one of my best friends doing the entire dance from Thriller in a parking lot, seriously. She is amazingly talented. But, I know that people who go through school have friends like this. At any era. The details might be different, but at heart, the feelings are the same. Some people come into your life and help shape you. They help make you into the person you are going to be. Sometimes they stay for a while, and sometimes they last for a lifetime. But they remain in your heart. These connections are the strings that Grady Hendrix plucks when you read this novel.

What I am saying here is that although this book spoke to me on a very, very specific level. It will resonate with just about anyone who reads it. Because, while the era is different, the relationship is the same. Abigail and Gretchen love each other, a particular kind of love made of pinky swears and lifetime promise. Promises that will probably fall away as age and responsibilities change the nature of their lives. But, promises and intention none-the-less. And Abigail is going to save Gretchen, even when she doubts her sanity and even if she dies trying.

Also, this is a horror novel. It has exorcism in the title, so very graphic and horrifying things happen. But it is told in a Grady Hendrix-type way that balances the narrative and horrific elements with fun and comedic things. He balances light and dark moments, so much so that, at times, you let your guard down as a reader. Then kaboom, something scary that reminds you that there is something seriously wrong with Gretchen.

The characters are very well developed. I enjoyed learning about all of them, even the supporting characters. If this were an 80s horror movie, many of them would have probably been sliced and diced by Jason Voorhees by now. Instead, Grady gives them a different sort of treatment. We get to know them and watch how Grady twists the proverbial knife in their lives. It is very well done.

My Best Friend’s Exorcism is a stand-out book with dark and twisted moments of humor that will appeal to almost any reader. Think Stranger Things mixed with The Exorcism all to the soundtrack of 1980s Madonna. It is entertaining as hell, especially if you enjoy a sprinkling of pop-culture references. I am finding Hendrix’s entire catalog entertaining thus far. My Best Friend’s Exorcism is the third Hendrix book I have read, the first being Horrostor followed by We Sold Our Souls. I have plans to read two more in 2021. You really can’t go wrong with his books.