Of Home and Heritage

Grimdark is a grey genre. Its unsettling tales exist in the shadowy veil between realism and fantasy, its characters hovering between villain and hero, life and death, hope and despair. Decisions are morally complex and often come with bleak and brutal consequences. In grimdark everything is ambiguous. Hardly surprising then that so many successful grimdark tales also idle at the intersection of culture and myth, authors finding opportunities within those blurred lines to explore geo-political, socio-economic, as well as technological issues. Take Rebecca F. Kuang’s grimdark military fantasy, The Poppy War, in which poor dark-skinned orphan, Rin, desperate to escape an arranged marriage, discovers a dubious power that will ultimately serve, and subjugate, her. To inform her story, Kuang drew heavily on her Asian-American heritage: the world of The Poppy War is inspired by the events of the second Sino-Japanese War and the Rape of Nanjing and makes artful use of aspects of Chinese myth, spiritualism, and magical realism. It’s a bold debut, fuelled by the fury of ‘otherness’, and one which resonated for me. Recently, I’ve become bolder about writing home and heritage into my own stories.

Born in the 60s of Chinese and European heritage, I’ve wandered that blurred no man’s land between cultures all my life. I never read a story that represented my reality, never felt that vital “thrill of recognition” described by Goodrich in Myths of the Hero in 1962. And while half a century ago, we could be forgiven for not recognising the importance of representation in fiction, today not so much. By now, we’ve seen the inspiring Ted Talk “The Danger of a Single Story” by Nigerian writer Chimamanda Ngozi Adichie. We’re aware that we can’t be what we can’t see and can acknowledge the vital role that storytelling plays in shaping perceptions of ourselves and of others.

Perhaps it’s due to the paucity of authentic Asian characters in New Zealand fiction that, for a long time, I largely ignored that part of myself. Or maybe it was because, like showing your teeth in public, it’s considered vulgar for Asian women to proclaim our truth to the world; instead, we must be submissive, quiet, demure, hiding the burden of our experience behind our hands. That changed for me in 2020 when I released three Asian-New Zealand grimdark tales plucked from my heritage and set here at home. 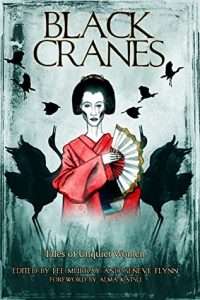 In  “Phoenix Claws” (from Black Cranes: Tales of Unquiet Women), a contemporary tale set in Wellington, a young woman chooses to keep her European-Kiwi boyfriend, even though he has failed her Chinese family’s unwritten litmus test for acceptance by refusing to eat a chicken feet delicacy. The consequences of her betrayal quickly become apparent when her life spirals out of control soon after. My husband is of European descent, and I subjected him to this very test. He failed. If fictional tales at the intersection of culture can transport readers into another’s shoes and make them reflect on a new perspective, they can do the same for their authors. By writing this story I uncovered deep-seated assumptions about myself and my relationship with my partner, including internal racism, superstition, and expectation. Releasing the story for publication became an act of courage.

In  “Frangipani Wishes” (also in Black Cranes), a young woman, haunted by the hungry ghosts of her mother, falls pregnant to a distant older relative, resulting in her immediate rejection from the family. Desperate to offer her daughter more than a life of drudgery, she marries an older man and travels with him to his home in New Zealand. However, displaced from her culture and her language, she is overcome with loneliness, and eventually succumbs to the demands of the ghosts who drive her to an unspeakable act. This story allowed me to explore notions of otherness and isolation experienced by Asian women immigrants to New Zealand through the lens of a popular Asian myth. Miserable thin-limbed creatures with distended bellies, and almost always female, hungry ghosts are unable to eat as punishment for greed, laziness, or sexual transgression. Stories about hungry ghosts are intended to reinforce cultural expectations of servitude, humility, and purity on Asian women in the same way the Red Riding Hood fable reminds Western girls not to stray from the path. Of course, Red Riding Hood is rescued by a kindly woodcutter, but hungry ghost-women starve for eternity.