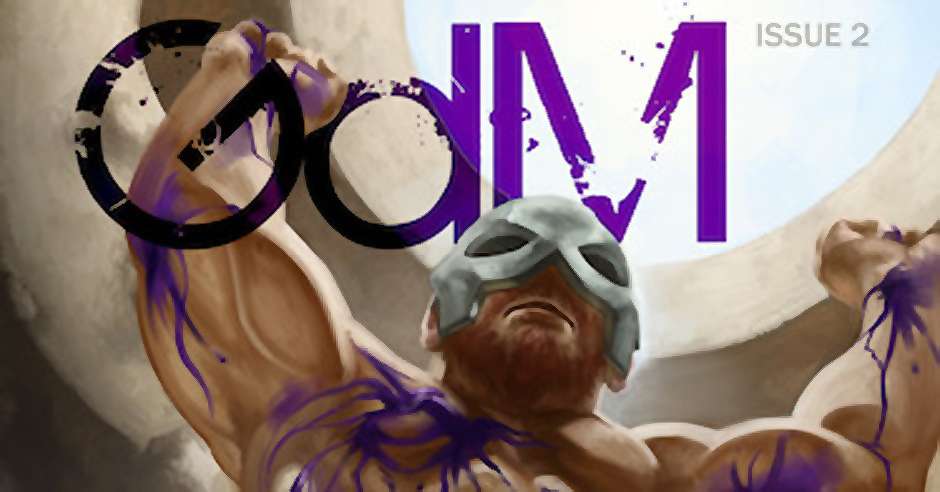 That time of the quarter is almost here, when we kick up our feet and feast on some grimdark goodness. This quarter we’ve got a cracking line-up for you, a deal for those only coming to GdM at the second release and a cheeky little competition. 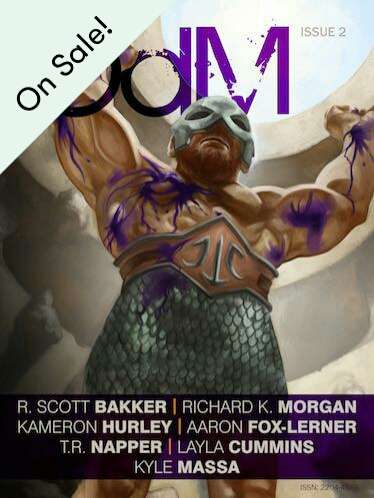 There are 3 large(r) short stories in GdM #2. From Writers of the Future winner T.R. Napper we’ve got a hard bitten sci-fi piece where George, a cage fighter, finds himself under the heavy boot of Hope Corporation in The Line. Next up is another sci-fi piece – a tip of the glass to MMORPGs – where a young drone pilot works through his boyhood issues in a storm of rockets in Aaron Fox-Lerner’s Drone Strikes for Fun and Profit. Finally, the one that has the Bakkerfans going berserk, the first of two installments in R. Scott Bakker’s The Knife of Many Hands.

We’ve also got an excerpt of Richard K. Morgan’s recently released The Dark Defiles, featuring Egar Dragonbane and one insult too many.

The cover is a commissioned piece from Julian De Lio, a depiction of R. Scott Bakker’s Sacred Hewer.

On the non-fiction side of things, we’ve got two interviews – Kameron Hurley showing us how far we and the genre have to go and Richard K Morgan wading into the grimdark discussion. GdM’s Cheresse Burke reviews Rob J. Hayes’ The Heresy Within and Jeremy Szal reviews Karen Miller’s The Falcon Throne. GdM’s team have come up with another insightful article to round out the issue, Grimdark Onscreen by Layla Cummins and Kyle Massa.

(How about a free Issue 2 for the first comment below that correctly identifies the sportsman I was thinking of with that “meat” comment – badger me for hints if you need help.)

Pre-order from this website now to make sure your issue is delivered on time to help with the New Year’s hangover couch time.

For those who haven’t yet picked up one of our issues, have I got a deal for you. Purchase Grimdark Magazine Issue 2 from this website, with all of the grimdark goodness above, and I’ll sort you out with a half price issue of Grimdark Magazine Issue 1 featuring Mark Lawrence’s Bad Seed to go with it. That’s two issues for $4.49AUD (25% off total purchase price).

Purchase an issue from either Grimdark Magazine’s website or Amazon.com and hold on to your receipt number. Post a creative/cheeky/funny review on our Facebook, Goodreads and/or Amazon page and we’ll pick the best one on the 15th of January 2015. We’ll contact the winner for their receipt number and then purchase the winner a copy of Rob J. Hayes The Heresy Within in paperback from Ragnarok Publications.