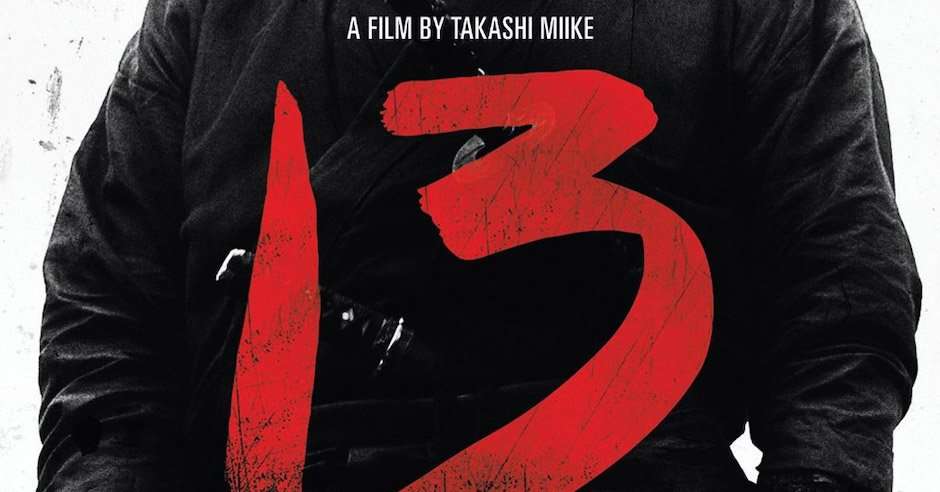 13 Assassins is a 2010 Japanese samurai film directed by the brilliant Takashi Miike – best known to western audiences for his cult horror The Audition and twisted crime epic Ichi the Killer.  The film is a remake of the 1963 period piece of the same name and allows Miike to paint his incredibly violent and stylized storytelling onto the epic samurai canvas and prove that he is a director capable of more than shock horror. 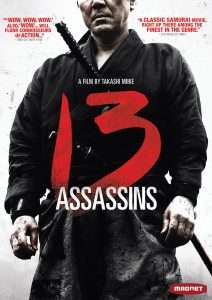 Grimdark fans who enjoy world cinema simply must follow Miike’s work. They are often, violent, bloody tales with a clear message and despicable characters that stay long in the mind. 13 Assassins, though different to his earlier work, still has that Miike stamp to it though it is placed on a 2 and half hour epic based in the waning years of the Edo period in Japan. Lord Naritsugu rapes, tortures, mutilates, and murders commoners and nobles at will. Protected by his half-brother Shogun, his actions threaten to cause a civil war and so a plot comes together in which older samurai band together to assassinate the evil lord. Word gets out of the secret plan and all hell breaks loose, ending in a battle that stands up against any of the best and bloody of the battles to have been seen on screen.

13 Assassins is a beautiful film with grim, disturbing scenes and characters. It opens with an act of seppuku – a ritual sacrifice for those dishonoured – the film never shies away from the horror of Lord Naritsugu’s actions and Miike is more than willing to let the blood spill across the film’s long running time. As grim as some of the actions and characters may be, every shot is put together with care and directed to evoke memories of even Kurosawa’s best work. Miike proves to be an incredibly talented director capable of handling this historic epic and working with intimate scenes full of impressive character work and somehow managing to make the audience care about each of the 13 assassins as they band together to face an insurmountable force waiting for them.

From the war-weary and honourable Shimada Shinzaemon who is tasked with bringing the band together, to the mischievous Loki-like Kiga Koyata who enters the film suspended from a cage in the forest, the characters all have their own identities and reasons for fighting. The interaction between the warriors in 13 Assassins allows enough time to get the audience to know them and understand who they are before they eventually end up in a fortified town facing a force of over 200 trained warriors. The battle is worth the price of the film alone. Beautiful choreography and great use of the stunning northern Japan location of the Yamagata Prefecture adds to the incredible dance of blades that is the film’s climax.

There have been many stories recently that play with the plot device of weary warriors banding together to fight a greater, malevolent force (A Time for Swords by Matthew Harffy, The Maleficent Seven by Cameron Johnston) and they all owe a debt to the work of Akira Kurosawa’s Seven Samurai. Miike understands the importance of Kurosawa’s work and has produced something that pays homage to those old samurai epics that put Japanese cinema on the map whilst also carving his own style into the movie and ensuring it stands alone as an incredible piece of violent historical cinema.

13 Assassins is a gory, violent epic film that honours the past of Japanese cinema whilst producing something that will arguably be seen as Miike’s easiest film to convert western audiences. This heroic samurai tale is a grim, beautiful classic with a bloody battle that will live long in the memory.