I received a complimentary advanced reader copy of ‘A Clockwork River’ from Head of Zeus in exchange for an honest review. 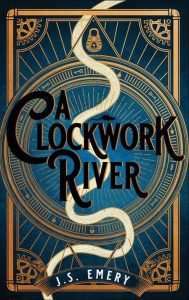 A Clockwork River is the debut novel of brother and sister writing team Jacob and Sara Emery. It is delightfully weird, clever, and a luxuriously slow novel set in a historical urban fantasy world. It is not a typical grimdark novel but it does have many elements of a gothic soft fantasy, is richly detailed and overall an enjoyable read.

The main characters of A Clockwork River are the Locke siblings Samuel and Briony. They are relatively young protagonists living in a decaying town house in a place called Lower Rhumsford. Built on the river Rhum, Lower Rhumsford is the jewel atop a crown of subterranean engineering, a set of hydraulic pipes that have been in place for centuries and provide countless feats of industrial conveniences. One of the key engineers of this system was Samuel and Briony’s ancestor meaning the duo have grown up in a formerly grand ancestral home and one of the few things left to the family is their good name. Similarly to the once fashionable and splendid Locke family, the engineering systems beneath Lower Rhumsford are failing and with that the city is slowly grinding to a sluggish halt. Few engineers remain with the skill to maintain the pipes, and Samuel Locke shows great promise as a hydraulic engineer. But he goes missing under very suspicious circumstances and Briony is left to find him. She faces an epic journey, and requires the assistance of a great many characters, if they are to be safely reunited.

As a novel A Clockwork River is one of the most linguistically stunning I have ever read. The vocabulary is intelligent, it is full of long complex sentences, and the narrative flows in a beautiful way. However although I personally enjoy that I can also see why it may be very frustrating to other readers. Even as someone who loves a good grandiloquent word I found it at times distracting from the story. A minor annoyance was also there being some unchecked Americanisms in word usage, especially when words have a different meaning in the English vernacular.

Although this is a long novel, the chapters give good pausing points so it is not something that needs to be read in one sitting. It is meant to be basked in and read slowly, seemingly for the enjoyment of reading more than anything else. Which if I had a completely empty day to do nothing but curl up and read, I would adore. As I did not, it felt a bit of a slog, like the narrative was plodding on.

J.S. Emery referenced The Odyssey in the ‘About the Authors’ and it is evident that they have been heavily influenced by epic stories. A Clockwork River is not a quick read and like other epics it has tangents and off shoots to the main story line that turn out to be dead ends, or only move us a tiny bit closer to the finale given how much time was spent on that diversion. There are also a lot of other characters who have varying levels of importance and sometimes I felt a disproportionate amount of time was spent focussing on them and their sub plots. Although these minor characters are also some of the more fun and likeable ones and do provide some comedic relief.

I am a little torn about A Clockwork River. It was a lovely read – complex, ingenious, and droll. The world J. S. Emery have created is unique and exquisitely detailed in all its decaying glory. I had a great sense of satisfaction when I actually finished the novel. It is one of those novels where the overall experience of reading it is the joy. I enjoyed reading it, and it was like nothing I have ever read before, but I do not have a burning desire to reread it in its entirety. 3/5.