REVIEW: A Plague of Swords by Miles Cameron

“Never ascribe to some conspiracy of evil what can be explained as easily by ignorance and fear.” 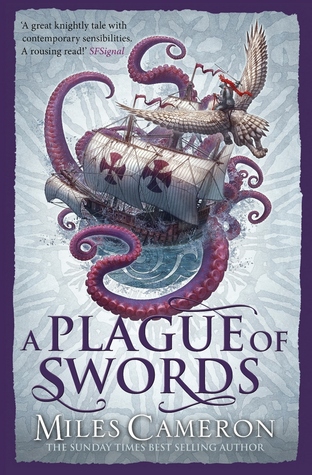 Now being the fourth book of the series, I’ll not go into the plot and intricacies of A Plague Swords – but I WILL go into everything that is especially brilliant about The Traitor Son Cycle.

With the grand ending of the previous book, A Plague of Swords begins with the ‘sides’ of the various wars in a state of limbo, recovering from the conflicts and preparing for those that lie ahead.

“Ser Tomaso,” she said. “It is very likely we will all die.”
“Or worse,” said Brown, the first words he’d said in days. Ser Tomaso made a brave face.
“Perhaps,” he said. “But we will eat well.”

A Plague of Swords has the addition of some intriguing and enjoyable features, such as SEA MONSTERS – and yes, they are terrifying and glorious. We also have the addition of a certain Gryphon that is now rideable by a certain knight – Ariosto is one of my favourite characters, I really want my own Gryphon. Even if they are hungry all the time. He’s so polite too! Yeah, I like Ariosto.

We also see a thread that resembled the final chase in The Last of the Mohicans. Miles Cameron has taken influence from various cultures, and I loved reading about the tribes that were obviously inspired by Native Americans.

Being four books into a series some readers would expect A Plague of Swords to be similar to the previous three reads, with small changes. But no, Miles Cameron has clearly developed as a writer and has enjoyed taking risks. We know there are gritty and bloody battles with knights in full plate, heavy cavalry charges, vile boglins and pageantry. But there are twists here, like spy threads, new creatures, celebrations, new alliances. There is something extremely new to this fantasy world that keeps you on your toes.

“Since when does war only have two sides?”

5/5 – I am loving my foray into The Traitor Son Cycle and cannot believe I am so close to the end. A Plague of Swords is a fantastic addition and has proven what an excellent writer Miles Cameron is (yet again, I know!)

Buy A Plague of Swords by Miles Cameron