I am convinced that Alix E. Harrow can do no wrong, and her new book A Spindle Splintered proves this yet again.  I was introduced to her writing two years ago when she released the sublime Thousand Doors of January. Since then, I have read many of her works, including short stories: The Autobiography of a Traitor and a Half-Savage, Mr. Death, and I loved them all. 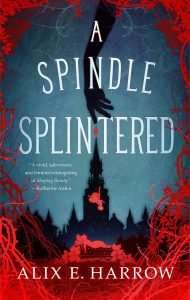 A Spindle Splintered is a retelling of Sleeping Beauty which is based on the fairy tale “La Belle Au Bois Dormant,” by Charles Perrault, written in 1697. This original story inspired the Brothers Grimm fairy tale, The Briar Rose. But, most people are familiar with Sleeping Beauty because of the Disney adaptation 1959. The original fairy tale is about a young princess named Briar Rose cursed by an evil fairy to sleep for 100 years once she pricks her finger upon a spindle. Knowing how traumatic awaking alone would be, a good fairy put the entire palace to sleep to awaken once the princess does.

The original version of the story has the princess “discovered in her castle by a wandering king, who “carries her to a bed, where he gather[s] the first fruits of love.” He leaves her there and where she later gives birth to twins. “Fruits of Love” means she was raped and impregnated. It is creepy as hell.

There are obviously many issues with the original story, and I’d say that we are looking at the story through the lens of modernity, but I can’t believe there was ever a time where the idea of being raped while sleeping was considered acceptable.  The idea of agency, body autonomy, and free will come to mind. It is one of the biggest things I noticed when I watched Sleeping Beauty as an adult. Harrow took the original story and put a refreshing take on it giving the princess a mind, a heart, and desires for something more. It is a perfect place to fracture this fairy tale.

The story starts with Zinnia, our protagonist, about to turn 21. (Also, I love the flower name nod. The original sleeping beauty was Briar Rose; now we have Zinnia.) Zinnia suffers a long-term illness and knows that her life will be ending soon. She has always been a fan of Sleeping Beauty’s mythology and knows how much Zinnia loves Sleeping Beauty; her friend throws her a themed birthday party, complete with a spindle. The spindle slips and Zinnia is whisked off to the world of the actual Sleeping Beauty.

Zinnia is a very modern woman, and although she has a significantly shortened lifespan, she tries to make the most out of her life. This is in direct contrast to the environment she is thrust upon. There is an air of helplessness to everything. Zinnia cannot help her future and impending death, and the princess cannot help the impending curse.

A Spindle Splintered is a coming-of-age story; finding one’s own path, and not going the way laid before you. I won’t ruin the twists and turns of the narrative. I loved what Harrow did here. Plus, a little science fiction multi-verse thrown in always will be a hit with me. I know that it is not the type of thing a reader of dark fantasy or grimdark goes for, but sometimes you need a little lightness in your stories and this fits.

I recommend this story. Again, I love Harrow’s writing, and A Spindle Splintered is another excellent story to add to your TBR.