A Time for Swords is a fresh story from Matthew Harffy, author of The Bernicia Chronicles. Stepping away from the popular character of Beobrand, Harffy delivers more gripping historical fiction following Hunlaf, a monk forced to stand and fight when caught up in the infamous raid on Lindisfarne in 793. 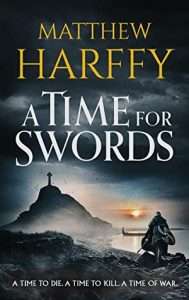 A Time for Swords is told from the first-person perspective of Hunlaf.  It is through this young, God-fearing monk’s eyes that we first witness the destruction and devastation caused by the raiding Norsemen as they slaughter the people of Lindisfarne, raping and pillaging before fleeing with the stolen goods taken from the monastery. Distraught at the mayhem forced upon the peaceful land, Hunlaf becomes enraged and fights to protect his people. Knowing that the Vikings will return to raid the coast again, Hunlaf enters an uneasy alliance with one of the assailants, Runolf, who had been abandoned after fighting against his own people when defending innocent children caught up in the battle.

This is where the story really steps things up. The suspense of not knowing when the Norsemen will attack keeps the characters and the reader on edge as Hunlaf and Runolf find others to aid in their cause. Harffy acknowledges the influence of Kurosawa in this novel – a motley band of warriors with different skills standing together to defend the helpless has been done with varying degrees of success since Seven Samurai and The Magnificent Seven and thankfully, Harffy is a talented writer with the skills to pull it off here. The story is well-paced with a mix of suspense and brutal, intense fighting, full of engaging characters.

A Time for Swords is a must-read for fans of brutal, well-researched historical fiction. If you have enjoyed Bernard Cornwell’s Saxon Stories and don’t know where to look for your next fix – well, you’ve found it and you will not be disappointed! For those who are yet to dip their toe in the genre, I’d recommend this as a starting point. Excellent prose, interesting characters, visceral battles and a cracking twist or two prove that Matthew Harffy is an author on the rise. An excellent first tale in what I hope will be an eventful and thrilling series.

Read A Time for Swords by Matthew Harffy