REVIEW: A Time of Blood by John Gwynne 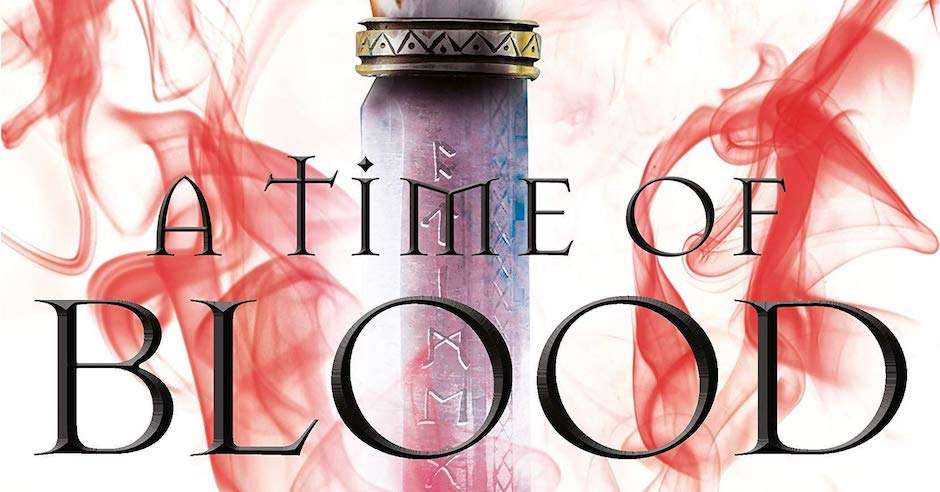 I received an uncorrected proof copy of A Time of Blood in exchange for an honest review. I would like to thank John Gwynne and Pan Macmillian for the opportunity. This review will contain spoilers for A Time of Dread. 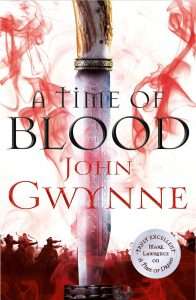 The second entry in the Of Blood and Bone trilogy starts one day after the legendary giant Sig’s last stand against the Kadoshim forces. Her heroism granted her comrades enough time to escape and we pick up the action with Drem, Cullen and Keld. In the wake of the destruction and the horrors they have witnessed the group race towards sanctuary at the fortress of Dun Seren. Elsewhere, white-wing Riv and Sirak Prince Bleda are debating their options after the attack of the Ben Elim’s stronghold of Drassil, taking into consideration the revelation that Riv is now clearly a winged half-breed. If she is seen in her current, true form the consequences would be drastic and Riv would be executed as an abomination.

Akin to A Time of Dread, this novel also follows four point of view perspectives. Readers will be familiar with the characters and viewpoints of the trapper Drem, the warrior Riv and the archer Bleda. A new perspective is that of Fritha – a priestess and captain of the Kadoshim’s covens. This is our first insight into the mind of a player on the ‘evil’ side. Although she was featured in the first book – mainly as Drem’s infatuation and ultimate betrayer – here, Gwynne fleshes her out as a character expertly. Throughout her chapters, she reflects about her upbringing, the loss of her child, her current motives and her overall mission objectives. We witness that she has legitimate reasons for her hatred and is not just a two-dimensional warped, pure evil lady. There is very little in Gwynne’s The Banished Lands that is 100% good or 100% evil. The distinction is cloudier and greyer in this series than what came prior, with the Ben-Elim and Kadoshim now residing in the human world. The Ben-Elim are now intune with and tempted by a plethora of human-like emotions that they did not know in the Otherworld.

In my opinion, Gwynne does two things better than the majority of fantasy writers.

Firstly, making me truly, truly care about the characters he’s constructed. There were many moments throughout this narrative where events from The Faithful and the Fallen were mentioned and just remembering the characters and the impact they had on me led to my tears actually blurring the words on the page I was reading before I realised it. After spending more time with Of Blood and Bone’s ensemble – through battles, betrayals, will they/won’t they love dramas, camaraderie and a sense of belonging – I care for the main and side players much more than I did in the first instalment. I’ve always enjoyed Gwynne’s depiction of animals and the parts they play to the overall narrative. Here we have loyal wolven-hounds, talking birds, flirting bears and some crazy warped concoctions of monstrosities too.

Secondly, and I’ll keep this one shortish because if you’ve read any of Gwynne’s releases you’ll be more than aware that he writes battles, duels, skirmishes and confrontations better than anyone in the business right now.

After epic battles galore, the final few moments are stunning and I have no idea what implications this event will cause for the series’ final entry. I cannot wait at all! Hopefully, knowing John’s work rate, the conclusion to the trilogy will arrive sometime next year (crosses fingers). Although this isn’t my favourite of Gwynne’s works, it is still pretty phenomenal. Gwynne is one of the finest modern fantasy writers around. The Order of the Bright Star shout ‘Truth and Courage’ when they charge into battle. Looking at the consistent, high quality of Gwynne’s outings, I imagine when he writes he has a mantra that states ‘anything below excellent is not good enough.’

[…] John Gwynne – A Time of Blood I said: “Looking at the consistent, high quality of Gwynne’s outings, I imagine when he writes he has a mantra that states ‘anything below excellent is not good enough.'” (Full Review) […]