REVIEW: A Time of Courage by John Gwynne 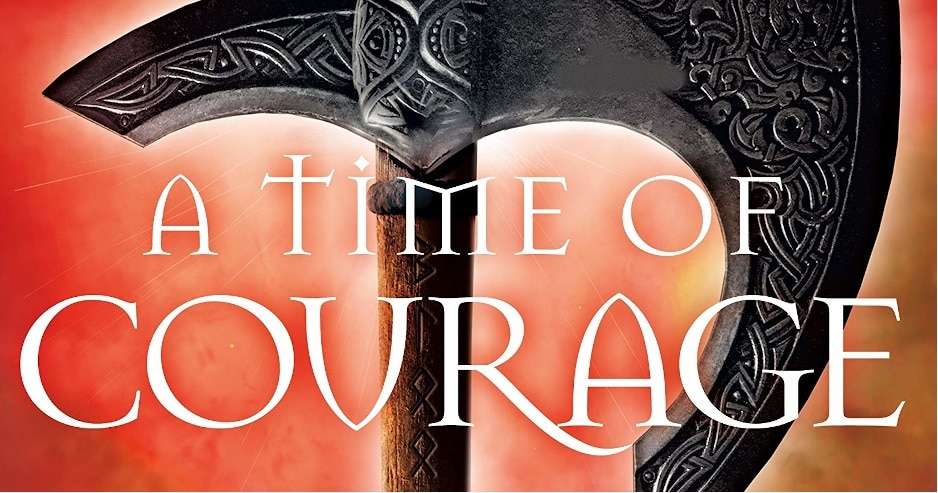 I received an advanced review copy of A Time of Courage in exchange for an honest review. I would like to thank John Gwynne and Tor for the opportunity.

A Time of Courage is the final entry in the Of Blood and Bone trilogy and the seventh story that takes place in Gwynne’s phenomenal fantasy world The Banished Lands. After completing and adoring all of Gwynne’s work I am running out of ways to describe how exceptional a writer he is. I will not say too much here regarding the actual storyline here as I don’t wish to spoil anything for people who are yet to read this or those fantasy fans who are yet to discover John’s work. 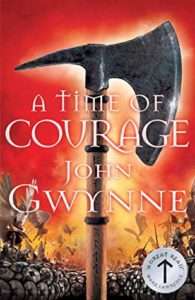 Wrath is one of my top five fantasy books of all time and A Time of Courage is very, very close to hitting those same lofty heights. One aspect exceeds all that the author has written before and that is the incredible battle sequences featured here. You won’t find many book reviews where the blogger doesn’t comment on how spectacular the fights and skirmishes are that Gwynne writes but what is presented here blows everything that has come previously away. Especially the final battle, the epic showdown of “good vs. evil” which has been seven books and millennia of history in the making. The finale takes up about twenty-five percent of the novel and I’m content to say that it is probably the greatest final battle I have ever read in fantasy.

When Gwynne writes I often feel completely like I am part of the world and events. During the battles it’s is as if I have been given an adrenaline shot – I read at seven-hundred miles an hour and I am sure my heart beats much faster than it normally does. This is heightened by the way the author often ends point of view chapters with a twist or a bang! This normally occurs when he switches POV scenes to numerous characters who are at the same meeting, event or battle to see different viewpoints which aids to build up the pace and excitement expertly. Gwynne’s writing is addictive and it’s always so easy to just read one more chapter and then look at the clock and realise it’s four hours later.

In addition to the action segments, these books shine because of the amazing characters, their relationships with each other, whether friendly or utterly bitter, and the presentation of hope – that good will succeed in this very violent and often brutally unfair environment.

There are five point of view perspectives that are presented. We will be familiar with following the half-breed warrior Riv, the horse-tribe King Bleda, the Demon King’s fiance and sorceress Fritha, and the tracker and revenge-seeking Drem. I had to chuckle quite often as the latter always finds himself right in the middle of scenarios and encounters and he seems to get saved at the last second by half a dozen different characters throughout the narrative! The new point of view perspective is from another player on the “evil” side. This is the viewpoint of Jin, Bleda’s ex-betrothed who has a vendetta that can only be settled when she murders him.

After falling in love with the characters in The Faithful and the Fallen, when I started this series I never believed I would care about this new ensemble as much as I did about Corban, Storm, Veradis, Maquin etc… By the end of A Time of Courage, I can confirm I shouldn’t have been worried. The whole ensemble is excellent. As well as the point of view characters standout players include the talented, charming yet cocky warrior Cullen, the legendary giant Balur One-Eye, and The Order of the Bright Star leader Brynne. I couldn’t finish a John Gwynne review without commending him on how excellent he presents animal characters. Talking crows, a loyal white bear, a half-woman/half-wyrm are just a few examples.

The finale and the way events are wrapped up is exquisite. There are extremely sad moments littered throughout the novel and some tragic events are presented as the conclusion approaches. Some of your favourite players will not see the final page, and some die in horrific fashion. Others die in the most shocking and unpredictable scenes I’ve seen for a while. I’m not embarrassed to say that I cried quite a few times and that shows Gwynne’s skill as an author to make me care so damn much!

There isn’t really anything else I need to say. A Time of Courage is bloody incredible and Gwynne will have a fan in me for life. I know it was only January when I completed this but I will be amazed if this isn’t the best fantasy book released in 2020.

Buy A Time of Courage by John Gwynne