A Wizard’s Forge by A.M. Justice begins with a deconstruction of your typical Young Adult fantasy heroine’s journey. Victoria of Ourtown is a bookish, shy, but enthusiastic young woman who would be an excellent addition to a girl posse consisting of herself, Belle, and Hermione. Her life is horrifyingly interrupted by the reality of slavers who take her as well as her fellow teenagers off to be sold as chattel. 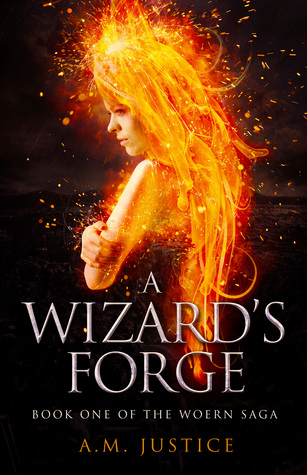 Victoria finds herself in a surreal situation where she is the property of Lornk Korng, the tyrant of a powerful mining empire. Lornk takes a personal interest in slowly breaking down her resistance and attempting to make her fall in love with him. Victoria is slowly broken down by a series of psychological games that only gets interrupted by an accident transporting her from her captor.

What follows is Victoria slowly trying to rebuild her mind and transform from a shattered victim into a warrior that can seek revenge. Victoria attempts to leave behind everything she was to become Vic the Blade, a merciless killer who will torture and execute any soldier in the service of Lornk. Yet, her trauma has left deep cuts that may mean she can never escape the scars of her ordeal.

Not every fantasy story needs a lot of swearing, ultra-violence, and sex to be grimdark. This is a work that deals with an interesting and underused plot device in Stockholm Syndrome. The protagonist is kidnapped, sold into slavery, and then gaslit until she’s genuinely in love with her captor. Thankfully, she’s also in hate and manages to escape to a country without slavery. However, the scars from her condition remain with her and cannot be easily excised.

I think A Wizard’s Forge is a book that is more enjoyable in its subversions than a lot of more typical deconstructions. Victoria is the kind of heroine who should be on a thrilling adventure but is broken by it early on. Then when you think she’s going to rebuild herself into a Conan the Barbarian(ess) heroine, she reveals just how shockingly unhealthy the road of revenge is as well. All of this is before she even begins her road to becoming a wizard.

One thing I liked is that this is a fantasy science-fiction novel. Magic is real on this world as is possibly other supernatural elements, but the people of this world arrived from Earth on a starship. Victoria’s people were the last ones who knew their origin and she is considered a heretic for believing in such a ridiculous premise. Victoria’s atheism makes her situation even harder as among the few people who oppose slavery are mostly the religious that believe in something she considers to be ridiculous.

I like the supporting characters in the book and I appreciate the villain is someone who specializes in mind games rather than brute force. Lornk believes he is doing a service to win over his slave without physical threats but all he does is leave her unable to differentiate her own feelings. Her love interests can’t really comprehend the ordeal she’s gone through or why she may never be able to trust anyone ever again romantically. The perfect sort of grimdark romance, IMHO.

In conclusion, A Wizard’s Forge may not be the grittiest or most overtly dark novel I’ve read but it’s one that benefits from its subtle grimness. It is about a broken person and how their fantasy adventure has made them worse. I actually liken it to The Chronicles of Thomas Covenant in a Dragonriders of Pern-esque setting. I think this is definitely a must read if you enjoy subversiveness in your fantasy.