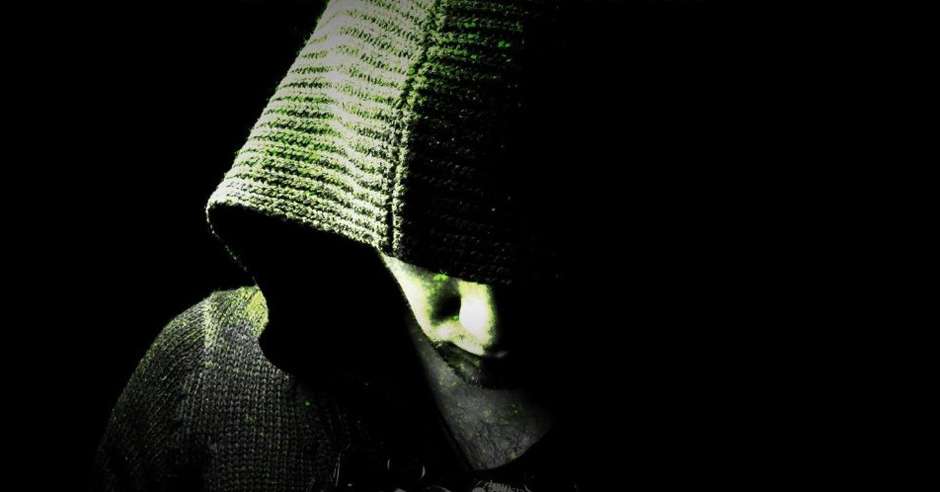 For me, reading Heroes Die, the first book in the Acts of Caine series by Matthew Stover, was like being an archaeologist and discovering that Ancient Romans had flat-screen televisions. It’s one of the best examples of grimdark fantasy that I’ve read, and it came out in 1997, one year after Game of Thrones. I’d never heard of it until it was recommended to me by a reddit thread and I decided to give it a go. I have no doubt that if Heroes Die were released today, with the booming expansion of grimdark in recent years, it would be championed as one of the finest examples of the subgenre along with books like The Blade Itself (2006), and Prince of Thorns (2011). Yet released in a time before grimdark was even really a thing, with a pulpy cover, Heroes Die and its sequels are mentioned far less frequently in the grimdark community than they deserve.

The series is a clever blend of science fiction and fantasy. In a dystopian future Earth, where corporations oppress the public into a rigid caste system, a breakthrough in technology allows people to be sent through to an alternate dimension, Overworld, a fantasy world filled with elves, dwarves and magic. Hari Michaelson is an Actor, one of the select few sent through to live out Adventures, which the public back on Earth can experience in real-time through his eyes with the use of complex virtual-reality equipment. While on Overworld, Hari lives as his alter-ego Caine, a ruthless assassin who kills targets with his bare hands. Although this mix of sci-fi and fantasy sounds like it could be cheesy, it’s flawlessly executed, and Overworld feels like a real place with as much blood and shit as anywhere, with racism against the ‘subhuman’ fantasy races, a deep magic system, and a pantheon of gods that seem to be background details at first, yet become more integral to the plot as the books progress. It works great both as an interesting setting and as a metaphor for why we read fantasy in the first place – to escape to somewhere where, despite the danger of monsters or bandits, we’re free to wander off into the woods or alleyways with nothing but a sword just to see what we find. When Caine is first transported to Overworld in Heroes Die, his thoughts articulate this feeling beautifully:

“The sun is brighter here – a richer yellow – and the sky is more deeply blue; the clouds are more full and whiter, and the breeze that pushes them carries a faint undernote of green and growing things. It’s a beautiful day; I can barely whiff the shit trodden into the well-churned muck that passes for a street, and the flies, swarming in blue-shimmering thunderheads over the heaps of random trash, sparkle like gemstones.”

Not only is the setting of Heroes Die astounding and original, but Caine is one of my favourite grimdark protagonists, along with Jorg Ancrath and Logen Ninefingers. He’s at the end of his Adventuring career and in his forties when Heroes Die begins, and the confidence and arrogant humour born from decades of Adventuring contrast well with his deep-rooted self-loathing. He’s also an incredibly interesting mix of intellectualism and brutality, with a professor father but a brutal under-caste upbringing in the slums. He’ll snap someone’s neck while quoting Nietzsche or break an arm while ruminating on the characters from To Kill a Mockingbird. New layers peel away from Caine until the very end of the series and discovering them is a delight. As a reader I found myself constantly surprised by Caine’s ability as a strategist and manipulator, as well as his breathtaking competence as a killer. As Caine himself puts it in Heroes Die, “there is a time to be smart and careful and look before you leap, and there is a time to just rock and fucking roll.”

Structurally, Heroes Die is a sword-and-sorcery fantasy adventure with its constituent parts braised in extra-strong grimdark sauce. Caine’s ex-wife Shanna is also an Actor, who plays a mage named Pallas Ril. On Overworld, Pallas has been captured by Ma’elkoth, the god and emperor of Ankhana, for trying to save innocents who would be killed by Ma’elkoth and his government as scapegoats for the empire’s problems. Caine juggles the demands of Earth and Overworld, cutting a bloody swath through Ankhana to save Pallas Ril while raising hell for his audience back home, generating questions in the reader about whether his noble goal justifies his brutal means, questions that Caine himself dismisses as irrelevant.

Despite Caine’s lack of concern for the morality of his own actions, at the core of the novel are deep philosophical issues. Heroes Die, and the whole series, feels like the lovechild of a philosophy lecture and a gladiatorial battle. Stover phrased it beautifully in an interview when he said that he has “a pretty good grounding in what college kids these days call Dead White Guy Lit, which means my head is crowded with an assload of allusions from Homer to John D. MacDonald.” [1] The book looks at why we, as a species, have always been so entertained by violence, and Caine is essentially a futuristic gladiator who has found fame by being the most brutal. Rather than coming to a didactic conclusion about how bad violence is, Stover raises the question and lets the reader consider it themselves. Ma’elkoth is a constant source of rhetoric, and he often makes entirely valid points. One of the great things about grimdark books is that they allow authors to experiment with how different philosophical stances might actually affect the world, without the constraints of binary morality. The conflict between Caine and Ma’elkoth’s ideologies forced me to think even when I wasn’t reading, and that’s a truly valuable thing. The philosophy becomes even more overt and relevant as the books progress and Stover successfully argues from varied standpoints through the use of intricate plots and nuanced characters.

Stover gives his characters the depth and nuance to make his philosophical discourse resonate throughout the series. Ma’elkoth is far from a cackling villain, and a lot of the time Caine finds himself agreeing with him despite their being at odds. Even the heroic characters such as Pallas Ril are composed of shades of grey. There is a rich, diverse cast of side characters that subvert fantasy archetypes, such as an elven maiden that runs a hard-core brothel. Every character, even those that are closer to traditional villainous or heroic archetypes, has surprising depth. Ma’elkoth’s lieutenant, the sadistic master-swordsman Berne, rapes, murders and tortures his way through Ankhana while hunting Caine. However, he shows loyalty to his men and to Ma’elkoth, a rare trait indeed in Stover’s gritty world. Conversely, Talann, an extremely talented ‘hero’ who has spent her life trying to emulate Caine, is shocked and disappointed at the reality of the man behind the legend.

We’re given the third-person viewpoints of several characters including Pallas Ril, but spend most of our time with Caine. When on Earth as Hari the narration is in third person, but it switches to first when he enters Overworld and becomes Caine, as if the reader is one of Caine’s fans experiencing the Adventure through Caine’s eyes using VR equipment. Caine’s internal monologue is fantastic and colourful and he doesn’t just describe the choreography of fights, but also “the erotic power of the snap of bone beneath your bare hands, the smack of flesh on flesh and the sudden, delirious surge that takes you when your enemy gives that faint sigh – that gasp of the consciousness of defeat – when his face goes slack and he sees his death in your eyes.” Stover’s ability to write action is superb, which is unsurprising considering he has studied a huge list of martial arts that I would struggle to even pronounce, and one jailbreak scene is particularly memorable for just how long it successfully maintains such high tension, resulting in my only getting to sleep at five that morning. Stover always finds a way to ratchet up the testosterone, and his writing flows beautifully, resulting in a book that practically reads itself.

The sequel to Heroes Die, Blade of Tyshalle (2001), is completely different from its predecessor. I won’t give too much away, but the framing of an Adventure is gone, and Hari Michaelson/Caine has to deal with who he really is without Acting. Shit hits the fan and there is real conflict between Overworld and Earth, with Hari/Caine smack bang in the middle, of course. It’s much more complex than Heroes Die, with more point of view characters and stakes that have been raised through the roof. There’s still plenty of action and violence to keep things rolling, but the pace overall is slower. Reading Blade of Tyshalle was a shock because I expected another story just like Heroes Die, but the serious, philosophical epic completely subverted my expectations in a good way. Stover constantly reinvents himself, always moving forward and maturing, much like Caine himself. Each book is a fresh experience that brings something new to the table.

The third instalment in the series comes in two parts: Caine Black Knife (2008) and Caine’s Law (2012). They are two separate novels but Caine’s Law continues directly after the cliff-hanger ending of Caine Black Knife, and the story across both books is clearly a unified tale despite marked differences in style. Caine Black Knife pulls the focus right back to Caine, who is the sole viewpoint character, switching between the Adventure that made him famous twenty-five years ago and his travels on Overworld three years after the events of Blade of Tyshalle. Unsurprisingly, Caine finds himself at the epicentre of a shitstorm of cosmic proportions that ties directly into his past, and in Caine’s Law, things become metaphysical, with split timestreams and constant “unhappening” of reality. Again, I won’t give away specifics, but Stover pushes the envelope even further in Caine’s Law, giving the reader pieces of the puzzle and forcing them to slot them together, which makes for a satisfying if occasionally confusing experience. It’s the most deeply philosophical book of them all, yet all of the deep questions are tied directly to the emotional lives of the characters and never become dryly intellectual. I became briefly lost midway through Caine’s Law, yet once I found my way back I appreciated just how artfully constructed Stover’s plot is. Upon finishing the last page I was surprised by how deeply the story had touched me, and I felt richer, both emotionally and intellectually, for the experience.

All fans of grimdark should read the Acts of Caine series if they want a stimulating story filled with adrenaline, blood, and chunks of bone that explores the philosophy behind grimdark fiction. With Heroes Die, Matthew Stover began writing grimdark before almost anyone else, and then continued to reinvent himself over the next decade and a half with its fantastic sequels. Just in case you’re still not convinced that the Acts of Caine series is worth reading, I’ll leave you with a quote from Matthew Stover himself that would touch the heart of any grimdark fan: 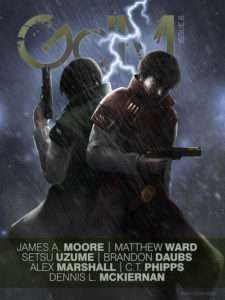 Grimdark Magazine #8 is available for purchase from our catalogue. 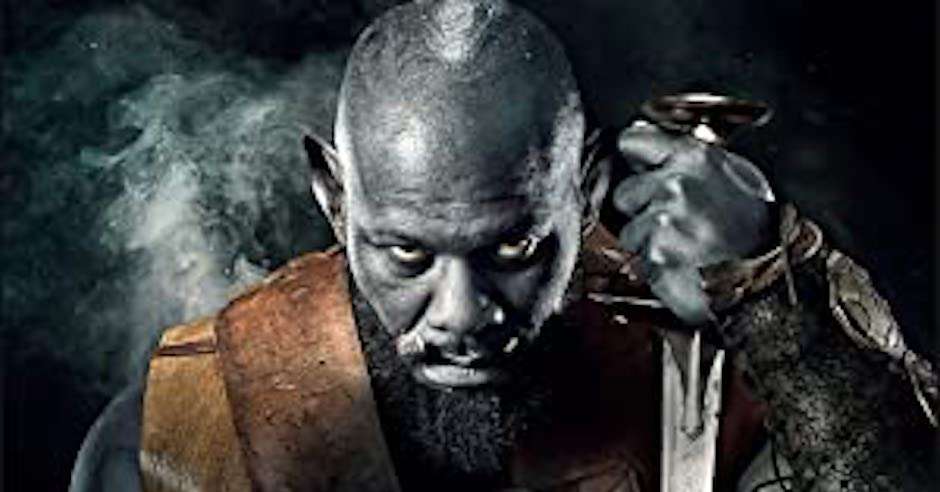