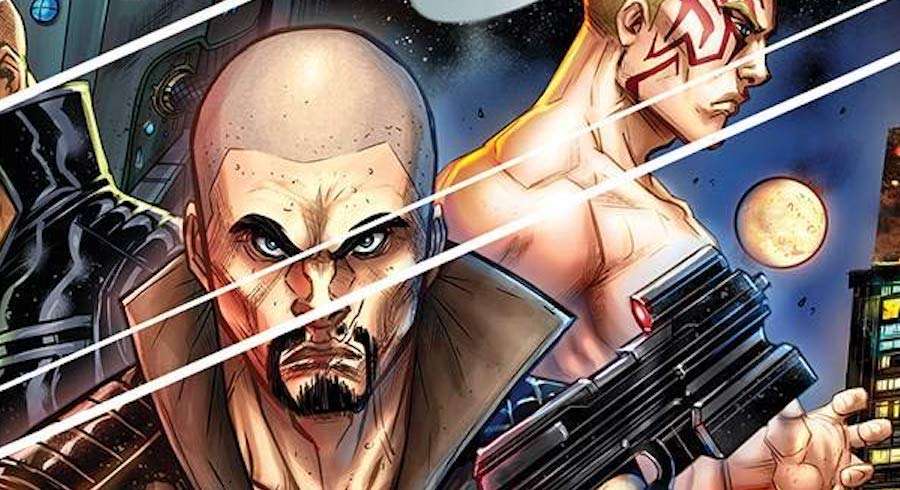 Altered Carbon: Download Blues is story written by Rik Hoskin with the script written by both Hoskin and Richard K. Morgan. This is “a Takeshi Kovacs adventure” and, at approximately 120 pages, it is in essence a longer short story or, perhaps more accurately, a short novella. 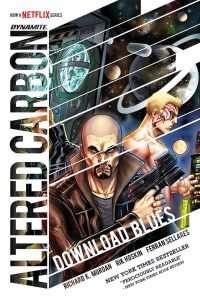 Download Blues begins with a man frolicking with three women in a hotel room. His bodyguard is outside the room. The man ends up dead and the cops are called. When they arrive at the scene, there’s no trace of the three women. They take the bodyguard back to the station and he doesn’t talk. His record indicates that he is an ex-envoy. The three women also turn out to be celebrities who all have an alibi.

Kovacs is conveniently in a nearby cell, having been arrested for brawling, so the cops ask for his help in interrogating the bodyguard. Of course, the bodyguard attacks them and jumps out the window, taking Kovacs with him. Kovacs chases after him partly out of “professional curiosity”.

True to Altered Carbon, the rest of the story is Kovacs’s detective work with a few action sequences. One can see the “standard” three-act structure. In that regard, it may be vaguely predictable but that is not a bad thing; the narrative alternates between expositions and action so the pacing is well handled, which it needs to be for a work of this length. To those who haven’t read the novel or seen the series, there is sufficient background exposition on how sleeving works and what an envoy is so the writers have catered to those who are new to this universe. And to those who are already familiar with it, none of that stagnates the narrative.

If anything, the pacing can slow down a little as some of the detective work can benefit with a stronger sense of mystery, with more opportunities for the reader to “connect the dots” regarding who the so-called bodyguard works for and what their goals are. Admittedly, this requires more complicated details to be signposted which may extend the work beyond the intended scope or scale. Perhaps the one weakness in the scripting is that the action sequence in the final act needs to be slightly longer as even the addition of one page – which is not unrealistic – showing Kovacs’s envoy intuition, tactics and skill would add to the wow-factor.

The art by Ferran Sellares is generally good. The designs of the characters, cityscapes, space habitat, military gear and vehicles are all fitting to the genre. Sellares’s inking and Vinicius Andrade’s colouring are balanced: clean enough to look sleek and professional, but also gritty enough to set the tone. Not every scene is dark but, either way, the contrast between light and dark is well handled.

I have only two complaints regarding the artwork in Download Blues. First, Kovacs’s sleeve (presumably) has a closely shaved head. The way it is coloured makes it look like he is wearing a glossy plastic cap. A bit more detailed texturing would fix the issue. Second, there are a few instances where the character outlines are too thick and could be cleaner. None of that outright ruins the work nor it is likely to jar the reader out of the experience, but more consistent outlines and edges would make the work more refined.

On balance, Altered Carbon: Download Blues is a decent production. As a fan of the first novel, the story and the visuals are true to the spirit of Morgan’s universe. Although there are a few things I dislike (as discussed above) and I admittedly wasn’t blown away, I still enjoyed this graphic novel and I am looking forward to seeing more.