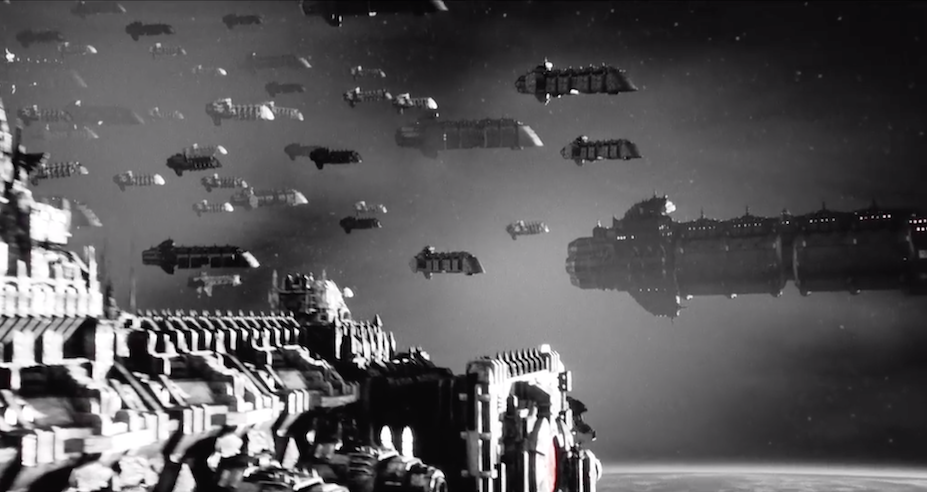 In Tempest, the fifth episode of the barnstorming debut series from WarhammerTV, Angels of Death, we flash back to an epilogue to the current story. The Tyranid hive fleet has arrived and a void battle between the full Blood Angels fleet (including the Sword of Baal from the main story), escalates in earnest. The steel and faith and  human flesh of mankind take on the sheer weight of numbers and psychic might of the Tyranids, and our bloody heroes are in serious trouble.

Straight off the bat, I either missed the cue that notified the viewer that Tempest was a flashback right at the start, or the Warhammer TV team really gave me more credit than I deserve as a viewer. I originally thought we were in the void over the planet we’ve been fighting over for the last four episodes. However, after a few minutes of space battle (with pretty horrible sound effects selection, I have to say) and some characters showing up who were already planetside, I realised we were in a flashback. Tempest is actually the story of how the Sword of Baal ended up in orbit over a Tyranid infested planet with Captain Orpheo taking a thunderhawk gunship to the surface to investigate the war on the planet’s surface.

The episode overall is a bit of a weird one. On the one hand, it was awesome to watch, full of fire and fury, of bold declarations and desperate decisions—everything we’ve grown to love about the Warhammer 40k universe. On the other hand, from a story perspective, it was absolutely pointless. There were no major twists or turns to add to the current storyline, no penny drops or anything to put my jaw on the floor to make the 28 minute episode genuinely worth it from a story perspective. If anything, they should have just made this episode 1 and gone with a linear storyline.

No matter how fun Tempest was from the perspective of a stand alone product, I’m really hoping the creators put as much time and effort into progressing the storyline next episode as they did with this superfluous one. Get me back to the Blood Angels on the ground battling the Tyranid menace while searching for Captain Orpheo already, please!

Check out the rest of our episode reviews here.