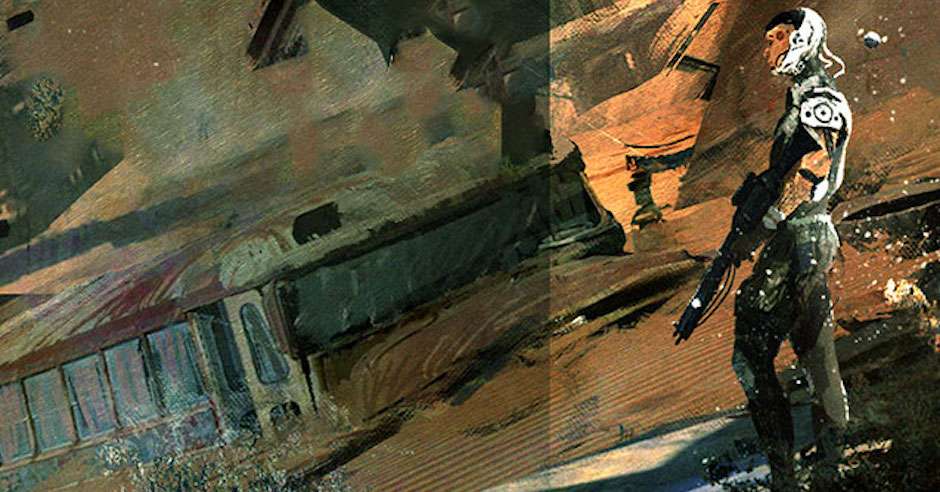 Apocalypse Nyx is the new collection of novelettes from multi-award-winning author Kameron Hurley (The Stars are Legion, the Worldbreaker Saga, and the God’s War Trilogy), and make no mistake: it’s grimdark AF. Set in the world of the God’s War Trilogy, the stories’ titular anti-hero, mercenary and bounty hunter, Nyx (Nyxnissa so Dasheen) might be the grimmest darkest badass protagonist I’ve come across in SFF. With maybe an exception or two, she doesn’t give a crap about anything but the job and the money, and maybe the whisky… and maybe the fucking. 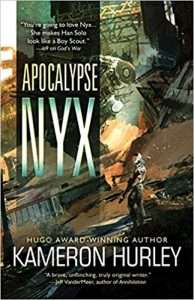 The stories take place in the war-torn borderlands between Nasheen and Chenja, which is sort of a secondary, near future, radiation- and poison-contaminated Arab Middle East with two burning suns. She lives and works out of a storefront in Punjai as an investigator/instigator/killer for cash. In the collection’s five stories, she and her band of misfits unravel the mystery of a deserter’s mutilated body and magnetic head, track down an unlikely bomber of chemical weapons factories, retrieve data bugs (yes, data bugs) from a corporate acid bath data destruction lake, go after some death magicians dead or alive, and rampage through a religious palace to collect a useless artefact. Each story is like a wild ride through a triggered mine field in an old pickup truck. They are tightly plotted, relentlessly violent, and unapologetically light on exposition. The reader is thrust into chaos from the start, which is both challenging and brutally compelling. I admit to not knowing what was going on at first—Is this for real?—but halfway through the second story, Nyx had me by the balls. I got into it so much I immediately went back and reread the first two stories and was equally pleased as I think most fans of grimdark fiction who read this will be.

Nyx has done her requisite two years of military service (men must do 20-25), been blown up and remade multiple times, joined the bel dames (government assassins), been kicked out of the bel dames and jailed for selling contraband zygotes, and has finally settled in, living job-to-job as a freelance hired gun, paid to solve the most dangerous and likely illegal problems for her desperate yet often well-to-do customers, and making just enough money for rent and whisky. She is joined by an unlikely team (every mercenary needs a team of specialists): Anneke, a petite, drug-addled, alcoholic weapons expert and sniper; Taite, a teenage com tech expert; Khos, a giant shapeshifting foreigner with a mysterious past; and Rhys, the requisite magician, a Chenjan deserter. The stories are mostly told in Nyx’s third-person point of view, and the characters mainly exist in their relation to her as opposed to each other, but each character is interesting and strange enough to be compelling in their own right, though I’m sure in a full-length novel they would really come to life. Hurley likes to subvert traditional gender roles and nearly all the other characters this crew meets are women because men are forced into a near lifetime of military service at the war front. Nyx’s constant inner battle of whether to kill them or fuck them is a steady source of emotional intrigue and internal conflict that serves to perfectly balance her constant external conflicts.

The SFF elements are mainly Rhys’s ability to create and manipulate huge swarms of bugs for both offensive and defensive purposes. Bugs and bug juice are used for nearly everything from communicating like carrier pigeons to creating fuel for the pervasive “bakkies” (pickup trucks that everyone drives) to building doors and walls to picking locks to blowing things up to storing data. Beetles and giant spiders and wasps and hornets are everywhere and are usually under the control of a human agent. It’s a fascinating and original concoction that boggles while it entertains. This story world also features shapeshifters that can change from human to bird or dog shape and who have real agency and seem to make complex life decisions. When I first read that Rhys was Nyx’s “magician” I was wary of the same old pointy-hatted spellcaster, but that is definitely not the case. Bugs are his tools. And making Rhys and the speculative element of these stories even more fun is that he doesn’t seem to be an especially good magician.

The magic, violence, action, and twisting plots are great in their own right, but these are character-driven stories ferociously propelled by Nyx’s fierce and implacable personality. She can move from wanting to fuck Khos to killing him for the job in a heartbeat. She admires Rhys’s delicate features and devout nature but he’s just a Chenjan deserter and if he doesn’t like the work, he can fuck off. Rhys serves as her unwanted moral conscience and she hates him for that. Her best mate is Anneke because she is always ready with the guns and the whisky even if she is always way too wasted and nearly gets them all killed in a drug-induced psychotic outburst. Nyx’s love-hate relationships with her messed up crew and herself provides full-depth intellectual and emotional stimulation on top of the insane plots and twists of these compelling though somewhat conventional conflicts. Yes, the stories and the way they are plotting are extremely engaging, but you are definitely reading about Nyx in this book and what she actually does provides the backdrop on which Hurley paints a truly fascinating and absurdly screwed up character. It is not the high concept SFF that her award-winning and excellent novel The Stars Are Legion is, but I happen to love successful character-driven fiction, and this is primarily the reason I absolutely love Apocalypse Nyx and intend to purchase God’s War as soon as I catch up on my reviews.

I usually talk about themes in reviews because I think they contribute to what the reader takes away from a book. Forget about it. Just let Apocalypse Nyx blow you away with its deep portrayal of a person in constant intellectual and moral crisis, and don’t worry about what it means. You will be immers