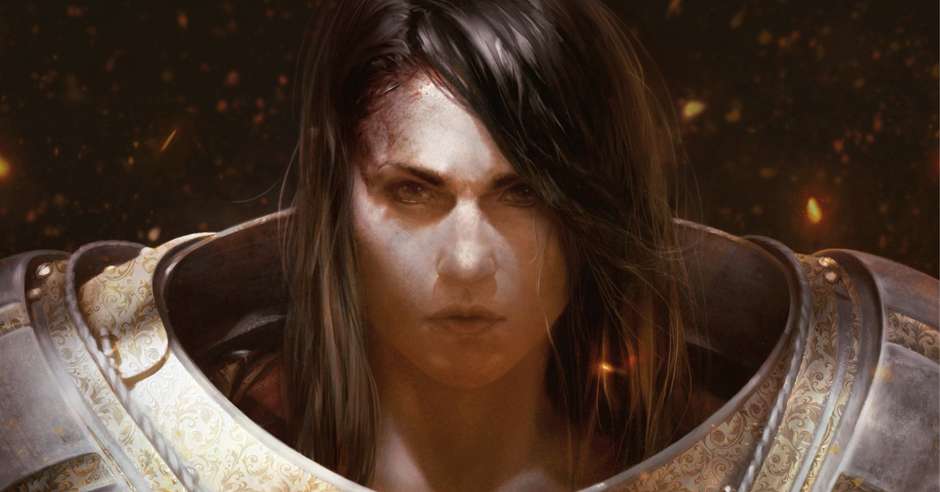 The Armored Saint is a novella from Myke Cole (Shadow Ops) and the beginning of his fantasy trilogy, The Sacred Throne. The publication seems to be part of Tor’s novella series, but at 208 pages, it reads more like a short novel than a novella. No matter what you call it, though, Cole makes the format work exceptionally well with tight prose, a close third-person single narrative, a condensed story world, and intense conflicts all stuffed into a smaller-than-door-stopper package. As most readers are aware, there is not enough time to read all the great fantasy and sci-fi available, and I have been wanting to read some of Cole’s highly regarded Shadow Ops series, but never got there. So I was glad to be given a chance to read and review the beginning of this new series, which looks to be a good one. 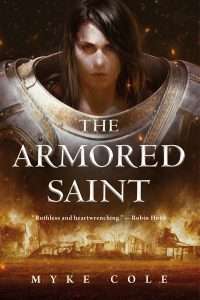 The Armored Saint follows the story of Heloise, a teenage girl living in a quasi-medieval village on the outskirts of an extremely oppressive empire under the rule of the religious Order and their Holy Writ. The job of the order is summed up in one line from the Writ: “Suffer no wizard to live.” The Order gallops around from village to village dispensing brutal justice on anyone suspected of wizardry or any village suspected of harboring a wizard. The Order is relentless and, even worse, accountable only to themselves. True to the short-form novel, Heloise and her father, Samson Factor, encounter the Order in the story’s first chapter. They stop Heloise and her father on the road. The effect is truly frightening, setting the mood for the entire story, and the hook, the inexorable, gripping, frightening conflict, of the story is set, never to let go.

While some, perhaps many, longer novels sag in the middle, get muddled down with seemingly irrelevant subplots, long descriptions, and/or episodic events, The Armored Saint has no time for bullshit. The story races along like a forest fire. When Heloise sees her friend murdered by the Order in a horrifying “Knitting” of a nearby village, she is determined to fight back. She is joined by her village who are fed up with the oppressive Order and skeptical about its intentions. Only Heloise knows the real secret that need to be protected from the Order to save her friends and family. But does she really know everything she thinks she knows? There are twists and turns aplenty, especially for such a short novel, and as should be expected, the whole fucking thing blows up in an explosive, magical, and pleasantly unexpected climax.

Cole’s prose is fast and direct. There’s no space for self-indulgence here; the author/narrator almost disappears behind Heloise’s thoughts and actions. Characters’ voices, dialogue, and language are consistent and diacritical, which helps create a distinct feeling for the culture of these villagers without the need for a lot of exposition. Cole also uses dialogue to move the story along briskly while adroitly avoiding info-dumping. The effect is a very fast moving tale, full of energy, excitement, and the type of character depth one would expect from a full-length novel. It’s not perfect, though. Heloise’s mother, Leuba, who appears sparingly in the story, is particularly without description or voice, a mere placeholder for a character, but that’s part of the tradeoff between a lengthy tome and a densely packed short novel.

Despite its short form, The Armored Saint is replete with thematic significance. Readers must ask themselves what rights do authorities have to govern people in extremely dangerous situations, a theme that seems extremely compelling given the expanding role of government in the so-called War on Terror. The nature of forbidden love and sexual attraction is called into question as well, with surprising results. Loyalty is another significant theme that drives the action in The Armored Saint: at what point are family ties in conflict with the good of society? Of course, the role of sexuality and gender in a male-dominated society is also explored. Are women worthy of traditional male roles in society, and why must it always be men who raise them to such positions (with the highly significant exception of Kameron Hurley’s The Stars are Legion—see review in GdM #11)? These are complex questions that are significant both in fiction and with regard to the resurgence of a global women’s movement.

Heloise joins a seemingly rising number of young, tough-as-nails female protagonists written by male authors in grim fantasy, including Nona from Mark Lawrence’s Red Sister, Thorn from Joe Abercrombie’s Half the World, and Pyrre from Brian Staveley’s Skullsworn. And Heloise is not alone in this story. She has other female friends, which separates The Armored Saint from a lot of old school fiction that features female characters who only relate to male characters, like the nearly non-existent female characters in The Lord of the Rings and the powerful but isolated female characters in A Game of Thrones, which shows that male writers are starting to “get it”: women are literally Half the World. I wonder if Heloise will continue to be the featured protagonist of The Sacred Throne trilogy; I can think of no reason why she shouldn’t. She is a complex, flawed, sympathetic character with huge balls… uh… I mean, gonads. If anything, she might be too ‘good’.

Which brings us to the big question. The Armored Saint is billed by its publisher as the start of “a new epic fantasy trilogy.” It remains to be seen how grimdark purists will receive it. Heloise and her father are ‘good’ people; there can be little argument about that. Because this is only the first entry in a trilogy, we cannot know yet if good will triumph over evil, but I expect it will. However, even though I enjoy grimdark as a favorite subgenre (IMHO) and love the morally grey sentiments that are central to it, I am very much looking forward to revisiting these complex characters and this terrifying world in the next installment in this gritty, dark, brutal, grim, fearsome but perhaps merely ‘epic’ series. Highly recommended.

The Armored Saint is expected to be released by Tor.com Books/Tom Doherty Associates on Feb 20, 2018. Our thanks go out to the publishers for sending us an advance copy.