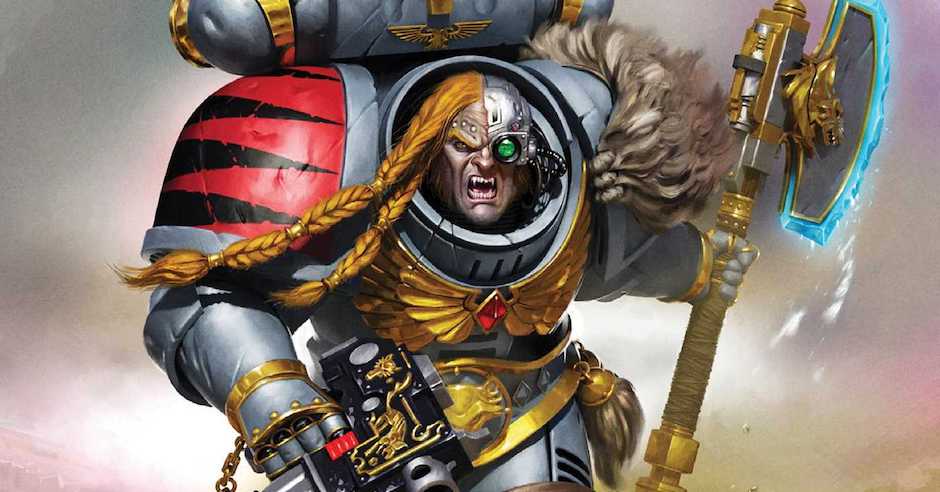 The Wolves are returning to Prospero. If you’re a Warhammer 40,000 fan, and you know how epic that sentence is, then you’ll love this book. Gav Thorpe’s Ashes of Prospero is full to the brim with action and lore that fans can really get their canines in to. 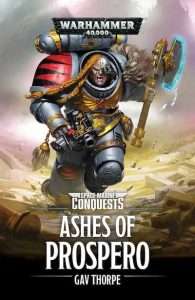 In Ashes of Prospero, The Space Wolves’ home world has barely survived an assault from the Thousand Sons traitor legion, and with the tribes they draw their initiates from hanging on by a thread after Magnus’ assault and the post-Chaos purges of the Grey Knights, and their Great Companies spread throughout the galaxy leaving few warriors at home, the Space Wolves are as close to breaking point as they’ve ever been.

Our main protagonist, Njal Stormcaller, a venerated rune priest (warrior wizard), lets his guard down for a heartbeat and a 10.000 year old splinter of the soul of a Thousand Son sorcerer buries itself within him, letting him know of an opportunity to find the legendary Bulveye and his Old Guard, the 13th company, lost for 10,000 years.

Arjac Rockfist, Champion of the Space Wolves, marches out to help a town beset by a vicious drake. It’s killed most of their people and left them in dire straights—and the slaughter shows no signs of stopping. It’s not the hardest thing he’ll need to accomplish as he is then asked to travel to Prospero with Njal to help him—and stop the rune priests from falling to Chaos is the need arises.

Lukas the Trickster doesn’t fit in with anyone, but he’s loved by the rebellious young Space Wolves. He wants acceptance, but rarely find it amongst his peers. He hopes that by joining the Stormcaller he can earn their respect (not that he’d ever let them know it).

As with many of the Black Library’s books, the authors know his primary audience of tabletop gamers and 40k obsessed readers well, and flips from close-in third person to more of a floating eye to make sure that even when the character is alone, the reader knows what armour and weapons they carry and that it aligns with the game miniatures.

To me, 30k and 40k books, when you’re many tens, probably hundreds in to the story, are all about the moments where you just want to punch the air because there is little other way to express the awesomeness. For this Space Wolves fan, it is, of course, the return of the 13th company. This booked skipped a ridiculous amount of other titles on my TBR simply because of the mere mention of the 13th, which of course potentially leads to to their missing primarch, Russ. I think if most people like me are honest, it’s stuff like this that keeps us coming back. Thorpe makes sure he hits these notes with a thunder hammer to keep you turning the pages.

Ashes of Prospero reads as a who’s who of 40k Space Wolves. Apart from some of the Great Company leaders like Ragnar Blackmane, there aren’t many characters from the tabletop setting that don’t show up. It feels like those scenes from The Fellowship of The Ring or The 13th Warrior where heroes and champions each stand up and offer their blade for an adventure. This is how I remember feeling reading the Space Wolf novels by William King and Lee Lightner, and that does not make me unhappy. However, if you haven’t read much Space Wolves lore, or you aren’t a already fan of 40k with the assumes embedded knowledge of the history and characters, then this book more tells you these people are awesome as opposed to showing you awesomeness, and so this is likely to fall a little flat.

The three main characters were interesting, with Njal feeling a little like a bumbling grandpa tripping through his mistakes and hoping it’ll work out at times, as opposed to the fearsome post-human he’s usually depicted as. Arjac and Lukas felt more on song for me, with Arjac being more aligned to your hulking viking champion character and Lukas very much the Loki of the group with his trickeries and also a well hidden desire to be a part of something.

The battles on Prospero are well depicted and full of action, and this book definitey sets up a couple of really key future storylines which I hope Black Library explore (preferably through Gav Thorpe, who I am a big fan of and we’ve been lucky enough to publish before). However the ending felt a little rushed, like there was little in the way of grand reflection of the saga created, or the momentous changes that two key happenings may have on not just the Wolves, but the imperium. I was left a bit unsatisfied by the ending, but can definitely appreciate the ride to get there.

Ashes of Prospero is a wonderful love letter to three decades of 40k and 30k Space Wolf players and readers. You can forgive the info dumps and the ending for that.