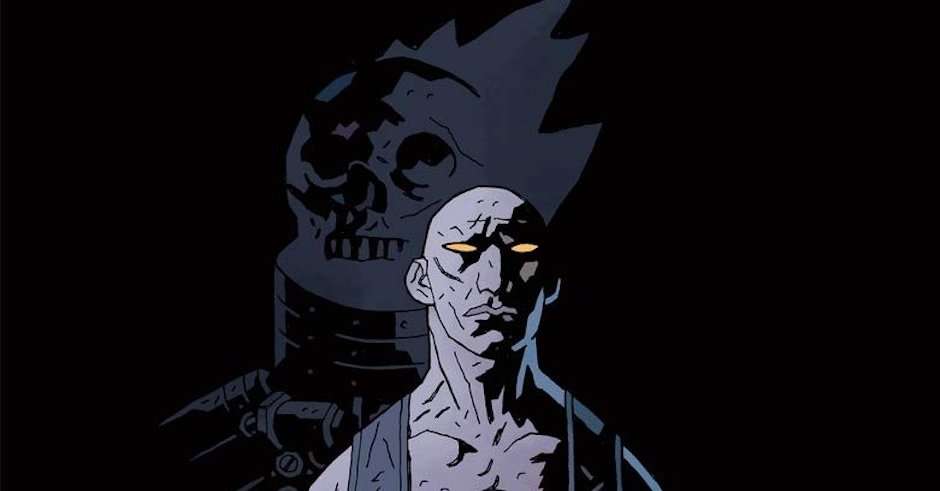 BPRD: Plague of Frogs Volume Two contains three collections: The Dead, War on Frogs and The Black Flame. These have been rearranged somewhat: they are placed in in-universe chronological order rather than arranged by the date of their publication as comics. This is for the best; the stories in War on Frogs make most sense read between the other two collections. 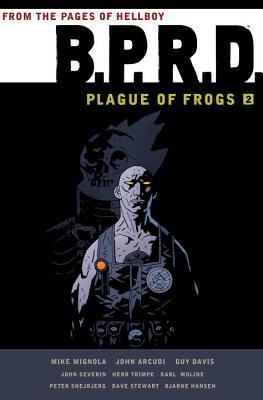 The Dead sets three things in motion. Firstly, we see the introduction of Benjamin Daimio, a heavily-scarred former marine, who serves as an increasingly militarised influence on the BPRD – and who clearly has his own story to be told, much as we have been introduced by this point to the troubled pasts of Abe Sapien, Liz Sherman and the others. Secondly, and as part of the growing War on the Frogs, the BPRD moves to an old research facility in the Colorado mountains. (There’s also a uniform change: yellow and brown to charcoal and pale grey.) Third, after the pictured hints in Plague of Frogs, we get some further details on Abe Sapien’s past, with a slow, unsettling encounter in a night in a Rhode Island mansion.

The main plot of The Dead jumps away from the Frog War to deal with something in the sub-basement of the Colorado facility. Despite the apocalyptic events and twenty-first century setting, there’s a continual sense of BPRD being a product of the mid-twentieth century, sitting firmly in the Cold War Federal structures of the United States (though the Bureau clearly has wider, NATO-style connections). Internet use is sporadic at best and everything tends to look remarkably analogue. There’s also the perennial Nazi occultists that pop up. The antagonist of The Dead (as well as certain elements of Plague of Frogs) is a quiet reminder, however, that not every piece of supernatural meddling is necessarily driven by the Third Reich.

War on Frogs is another collections of different shorter stories, detailing operations against the Frogs in a variety of settings. Whereas Guy Davis would draw all of The Dead and The Black Flame, here he would only draw one of the shorts. These take in a variety of scales of conflict and moods: squalid defeats are set well against devastating victories; painstaking campaigns against single skirmishes. It’s a return to smaller stories that doesn’t occur again. That’s not bad and later arcs work in brief human-scale narratives, but this is a valuable thread in the overall composition of Plague of Frogs.

BPRD: Plague of Frogs Vol. 2 would also see the beginning of collaboration in writing between Mike Mignola and John Arcudi, working together on the plots of The Dead and The Black Flame. This latter is a fine contrast to The Dead; whereas that was largely about internal struggles (literally and figuratively), The Black Flame would deal with external foes who would threaten so much more than the BPRD. The titular Black Flame tips things somewhat towards the cliche of the super-villain – an explicit inspiration noted by Mignola in his Afterword. However, this not only brings back elements of universe that had been set up by Hellboy: Wake the Devil but also does so chillingly and convincingly: did you really think no-one other than the Bureau was interested in the supernatural? The slow burn of boardroom meetings to corporate research on the Frogs to the emergence of Lovecraftian kaiju means that the devastation and drama of the third act is more than earned. It’s an unfortunate cocktail of catastrophic defeats and unseen adversaries for the Bureau, and a suitable reminder of quite how much is at stake. Guy Davis manages successfully to portray both the rubble of cities and illusive visions (Liz Sherman’s would-be mentor makes a first appearance in one of these) that allow key moments of The Black Flame to be told without dialogue, relying solely on the impact of full- or half-page images to convey portions of the plot.

It’s an odd route to the action-heavy climax of The Black Flame, but the both The Dead and War on Frogs provide a necessary element to in furthering and solidifying the avenues for the plot of Plague of Frogs.