In Baphomet by Night by Peter McLean Corporal Cully drops onto forged world Baphomet with two other experienced leaders and a couple of squads of green troops fresh out of boot camp for a two month stint babysitting the post-war wreckage of a city. The Cadians they relieve are beaten but unbroken, and they have plenty of food and ammunition. Looks like it’s going to be a cakewalk. But it wouldn’t be life in the Astra Militarium or Warhammer 40k if it was. 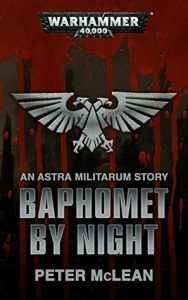 Baphomet by Night is a short story depicting a Guard platoon put into a situation that starts out rosy and quickly goes south from there in a true SNAFU fashion. It has all the ingredients you want in an Astra Militarium story: grit, a little dark humour, bombed out forge worlds, Imperial stupidity making things worse, and with Black Library starting to introduce some horror titles into their catalogue, a few stomach churning paragraphs here and there.

As McLean’s non-40k work includes the utterly magnificent War for the Rose Throne series (starting with Priest of Bones, which I cannot recommend enough), we know McLean knows how to write brilliant soldiers, their relationships, their PTSD, and their fighting. In this short fiction form, though, I didn’t feel the relationships between Cully and his green squad really hit (while acknowledging he actively avoided those relationships early on), and his friendship with Sergeant Rachain didn’t really feel like it was many campaigns deep.

Having said that, Cully is an excellent character, cut straight from the 40k Guard I grew up loving reading about. The story itself ends without much of a twist, a bit of a foregone conclusion, you might say, but was satisfying nonetheless.

Baphomet by Night is a dark take on the standard Guard story, and will meet the expectations of most Guard fans. I am really happy to see that Baphomet by Night is immediately followed by a second short story, Blood Sacrifice. I’ll be reviewing that straight after this one.