New Orleans and its surrounding swamps form the setting for Bayou baby, a highly original and disturbing novel by Canadian author Renee Miller, who mainly writes grim, dark stories that often stray into horror, with the odd bit of black humour sometimes thrown in. Dark, disturbing novels are something I often read from time to time, yet this particular yarn rocked me to my core, mainly due to it being a cocktail of unnerving scenes which include rape, group rape, incest, forced prostitution and eventually also murder and matricide, before turning into a vicious revenge romp. As for Miller’s hallmark black humour, I don’t recall there being much of that in this one. 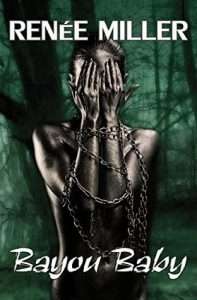 The protagonist of this story is Rowan, a half-caste swamp rat who was raised in the quagmire by her half-caste mother Jolene, who makes a living as a prostitute. Rowan’s days of youthful bliss and innocence are cut short when her mother sells her to Rosaline, a New Orleans brothel-keeper, in order to safeguard her future. For in 17th C New Orleans (at least it seems like the period is the 17th C, because Miller does not bog down the narrative with dates and excessive details), half caste women have no chance of making respectable wives, so that being a kept woman is the very best that the prettier faces amongst them can hope for.

Yet Rowan is not one to take this fate lying down (forgive the pun), so that she flees her mother and prospective employer by rowing her little canoe deep into the swamp, until she reaches the refuge offered to her by ‘Mama Gator’, an elderly Louisiana creole who lives deep in the swamp, and who is not averse to practising the odd voodoo ritual against those she thinks deserve it.

Unfortunately for Rowan, two of the victims of Mama Gator’s magic were the wife and child of Lucien Dumas, a highly powerful man of means in New Orleans, whose father was also murdered by Rowan’s mother Jolene (so as to protect her daughter from the perverted old man). Unknown to Rowan, Lucien is intent on exacting his revenge for the loss of his father, wife and child, by taking it all out on her. For unknown to Rowan’s mother Jolene, Lucien has secretly purchased Rowan from the brothel-keeper Rosaline, so that he can exact whatever sick fancy he wants on the young girl. All of which is a disgusting, stomach-turning prospect, yet one rendered all the more twisted when one learns that Rowan is also the illegitimate daughter of Lucien.

Quite why Lucien has waited so long to avenge his family members is anyone’s guess, and it is hard to understand why he would take out all of his ire and hatred on a young, innocent party, even though he has no regard for the lives of half-castes. In turn this means that Rowan proceeds to endure abusive treatment which is abominable to say the least, and which forces her to resort to the most unladylike measures to take down those who sought to break her. If you can survive the outrages and horror in the early part of the novel, the revenge romp which follows might serve as ample payoff.

All in all it’s 4/5 for Bayou Baby, which loses a star due to a couple of loose ends which cannot be dismissed as intentional ambiguity, as well as the overly erratic behaviour of the crocs, who are waved away like bush turkeys in some scenes and lethal in others. Otherwise this no holds barred account also contains moments of genuine warmth and fellowship, as Rowan and her friends desperately seek to fulfil her seemingly impossible mission of revenge against Lucien, who must be the most odious nemesis that I’ve ever encountered in fiction. The horrors endured by an institutionalised half caste subclass are also fleshed out without leaving much to the imagination, and it takes an author of considerable talent to ultimately conjure up some kind of higher meaning to one of the most unsettling stories which I’ve ever read.