Following on from his novella Dogs of War, Adrian Tchaikovsky’s novel Bear Head is a brilliantly observed, drily funny and deeply grim science fiction story of biotech, artificial intelligence and political greed. Despite living on Mars, life for construction worker Jimmy Marten is pretty dull, but that changes when the digital awareness of Honey the bear takes up residence in his headspace wanting to make contact with her old friend Bees, the Distributed Intelligence who laid the foundations of Hellas Planitia (or Hell City, as the locals call it). These days Bees is something of a digital bogeyman however, and while Honey tries to put her fragmented memories into order, back on Earth the tide of political opinion continues to turn ever more extreme, led by the relentless, loathsome presence of World Senate hopeful Warner S. Thompson. 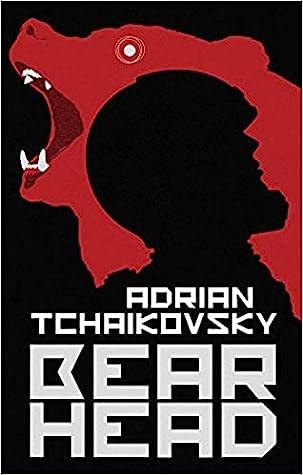 Set a few decades after the events of Dogs of War, this is recognisably the same version of our world, just developed along a natural – if somewhat grim – line of progression in terms of technology, politics and characters. While Bioforms (biomechanical fusions of humans and animals, from dogs and bears to lizards and mustelids) are integrated into much of society, questions of ethics in technology are being swept aside in favour of commercial gain and extremist political rhetoric. Meanwhile Hellas Planitia is being built on Mars for the benefit of Earth’s richest by poor, biomodded workers who won’t be able to reap the benefits of their labours. All this world building is utterly believable and (despite the sci-fi stylings) entirely plausible, and while there’s no requirement to read Dogs of War first as all the core elements are neatly woven in throughout, it’s worth doing if you can to really get the most out of this.

Into this combustible mix comes the erudite, sophisticated personality of Honey searching for answers, much to the confusion and irritation of Jimmy who just wants his head back (although to be fair it was his own foolishness and desperation that led to this situation in the first place). A more conventional narrator than Rex in Dogs of War, Jimmy’s tone of voice is nevertheless engaging and honest, his constant craving for a fix gradually giving way to a dawning awareness of what Mars really means to him. While Jimmy’s POV covers the action on Mars and Honey pieces together the events of her recent history back on Earth, we also see Warner Thompson through the eyes of his PA, Carole Springer. Thompson proves worryingly relevant as an antagonist, clearly influenced by a certain prominent US figure, and from Stringer’s perspective he’s a truly horrifying (yet somehow pitiful) figure, especially as the wider implications of her role become clear.

Tchaikovsky keeps up a brisk pace by rotating through these viewpoints, each with its own distinct voice and representing unique angles and perspectives on the narrative, between them covering slightly different time periods which converge over the course of the book. Right from the off it’s interesting to see the realities of life on Mars through Jimmy’s (biomodded) eyes – especially if you’re familiar with characters and events from Dogs of War – but as the main thrust of the plot is gradually revealed it becomes evident just how cleverly this world and the developing narrative are tied together. Life is tough for all of the POV characters here, but Stringer in particular has it bad despite the veneer of glamour and power – beware that there are a couple of scenes that amount to sexual assault, which are uncomfortable to read to say the least – and while we mostly only see Thompson through her eyes, he proves to be a genuinely disturbing antagonist.

While (as mentioned earlier) this would work perfectly well as a standalone story, anyone who has read Dogs of War will recognise it as a natural, smart extension of the themes and ideas from the novella, expanded upon and developed still further. It’s a more conventional story this time, with a broader remit and less focus on pulse-racing action, but it’s no less powerful for that. In fact, while there’s considerable entertainment to be found as Jimmy and Honey bicker within a shared headspace, this humour is balanced out by a real sense of darkness that goes deeper even than it did in Dogs of War. Far more than just a pacy sci-fi adventure about a digital bear stuck in a man’s head, this is a story tackling big issues – questions of consent, technological ethics, free will and what constitutes ‘human’, along with a horrifying illustration of the abuse of power – without losing sight of an essential core of humanity.

Many thanks to Head of Zeus and Adrian Tchaikovsky for sending me an advance copy of Bear Head in exchange for this honest review.