Beasts & Beauty by Soman Chainani is an interesting collection. It’s probably the youngest book I’ve reviewed for Grimdark Magazine, as these retold fairy tales sit between middle grade and young adult for the most part. This doesn’t mean that they are not enjoyable for an adult audience – I think they very much suitable for all ages even if they are aimed at a younger audience. The collection holds darker versions of twelve of the most famous stories told again and again in the western fairy tale corpus, wonderfully illustrated by Julia Iredale. The ARC I was sent for review only held preliminary sketches, but l came across a finished copy in a bookshop the other day (because yes, I am a slow reviewer these days, shame on me) and it looks absolutely gorgeous. These illustrations just add another dimension to the stories which I adore. I wish more books not aimed at small children came so heavily illustrated. 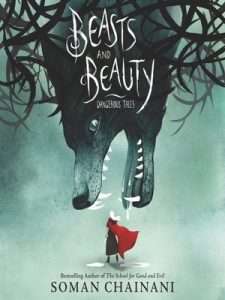 In general l enjoyed the anthology a lot – l am a fiend for retold folk tales, especially ones aimed at a YA audience. But I was also slightly disappointed at the choice of stories – it felt like the author chose from among t l this to other recent anthologies such as A Universe of Wishes (Ed. Dhonielle Clayton), which to be entirely fair collects the work of of a number authors rather than a single one, l feel Beasts & Beauty only wins out in terms of the high qualify of the physical object. While Chainani does transport some of the stories into more diverse contexts – for example his Hansel and Gretel is inspired by a South Asian setting – ultimately his stories don’t try and reinvent the source material to create something unique and modern. The one story that stood out to me was Jack and the Beanstalk, which twisted the known tale in unexpected ways, recasting the role of the villain entirely.

As a whole, the collection feels a bit like an attempt to profit from the late year gift-buying boom as the book is produced beautifully and will make a fantastic gift. I think it’s less of a must buy for those readers who simply love reading retellings, as there are other anthologies and collections out there that do that particular thing better or in a more creative-way. However, if you are a grimdark-loving reader and have a child or teen in your life who you want to bring over to the (grim) dark side look no further and get them Beasts & Beauty for Christmas.