Boris Akunin’s Black City is a 2012 Russian thriller, translated by Andrew Bromfield in 2018 for Wiedenfeld & Nicholson. It sits towards the end of the Erast Fandorin series; these are, variously, detective stories, thrillers and mysteries, generally set in and around the Russian Empire of the late nineteenth and early twentieth century. 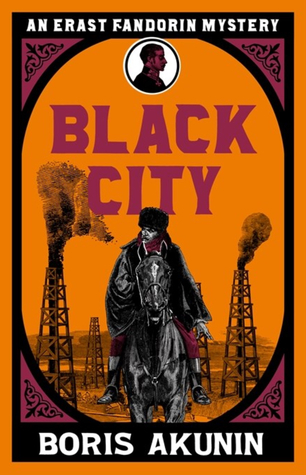 Fandorin himself is a former government agent, getting on in years by the time of Black City. He is a successful and respected private investigator, a polymath and something of a dandy. Previous books featured a spy hunt during the Russo-Turkish War of 1877-78, a murder mystery set aboard a cruise ship and an investigation among the decadent artistry of 1900 Moscow.

A murder in Yalta takes him to Baku, the titular Black City. Baku (as football fans discovered last year) is the capital of the present-day Azerbaijan, but in 1914 is part of the Russian Empire enjoying the fruits of an oil boom. The causes and consequences of the First World War and the Russian Revolution are certainly in the mind of the author, and likely the reader, though this is not quite a novel ‘about’ those historical events.

This was a return after several years to the Erast Fandorin series and I was not disappointed. The background of Baku makes for a spectacular setting at the intersection of Tsarist authorities, Bolshevik conspirators, nouveau riche oil moguls, struggling industrial workers, Islamic culture, modern technology and the ethnic tensions of the Caucuses. Elements of Black City and its fellows are rather pulpy – as the numerous gunfights, romantic interests, speedboat chases and Fandorin’s Japanese manservant and companion bear out. This said, the Japanese elements are conveyed with a respect and depth due to Akunin’s academic background in Far Eastern studies; pulpy they might be, but they don’t seem phony.

I also suspect some of the phraseology and humour does not translate perfectly from the Russian, but this does not reflect poorly on Andrew Bromfield at all. Indeed, at least a passing familiarity with Russian history, literature and customs will be useful to the reader so you don’t choke on the references to Chekov, or the ‘Erast Petroviches’, ‘Mesrop Karatepoviches’ and other patronymics. That said, it will be easier to start your journey into Russian literature with this than to go into Crime and Punishment unprepared.

I enjoyed the brisk pace and sense of place in Black City, though it may not sit perfectly with all. A new reader may appreciate reading one of Fandorin’s earlier adventurers first. This in mind, I shall award it Three Stars for a broader audience.