Black Legion, the follow up to the Talon of Horus continues the tale of Iskander Khayon as he takes part in the wars to assert the titular Black Legion as the pre-eminent force amongst the Nine Legions. 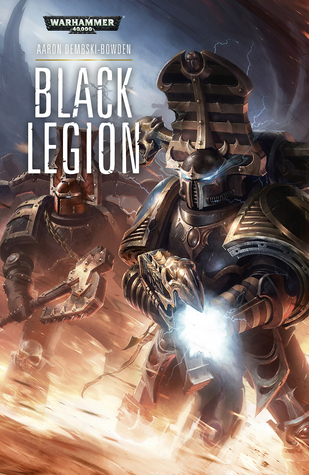 The main thrust of the story is Khayon’s ongoing feud with a rival warlord, Thagus Daravek who threatens the Black Legion’s ascendancy. The wider tale sees the beginning of what would be called the first Black Crusade and a confrontation between Abaddon and a great hero of the Imperium as the call of the daemon sword Drach’nyen rings out. Again, this is narrated by Khayon to his Imperial captors millenia later.

This is a story for 40k devotees and would be a very tough jumping on point even for some of those who’d missed out on the first book, such is the singular nature of the story and the relative obscurity of these events even within 40k’s well trodden canon.

Indeed, this tale comes across very much as a middle chapter. It lacks some of the immediacy and creativity of the first book and also fails to give a truly satisfying conclusion, with Daravek coming across as an antagonist of the week rather than a true Big Bad.

Not that there is a good/bad dichotomy in this story as much as bad who’s point of view we get, and bad who stand opposed to it. That’s not to say Khayon is a wholly despicable protagonist. His care for his ship, his long term allies and his retinue is clear and his reasons for turning against the Emperor of Man are ultimately reasonable. I’d better be careful talking like that, the Inquisition will be asking questions.

There are some lovely sections in this book, not least Khayon’s assault on Daravek’s fortress near the beginning of the story and the appearance of the Warp Ghosts later on, but the plot meanders while the best moments and themes aren’t as compelling as those explored in the Talon of Horus. Thankfully, the moments where Khayon breaks out of his reverie and acknowledges his current circumstances are less immersion breaking than in the first book.

Dembski-Bowden’s prose and characterisation remain delightful with Khayon being a layered and compelling protagonist and Abaddon is given new depth that we haven’t seen in either the Horus Heresy books or current 40k settings.

Ultimately, Black Legion is not as captivating a story as the Talon of Horus but remains an entertaining and capable middle chapter.

A recommendation for fans of 40k, and anyone who liked the previous book. I just hope that the final installment of the trilogy emerges at some point.