Blackcoat is the latest story from Steve McHugh (The Hellequin Chronicles), an action-packed sci-fi novella that follows the exploits of Celine Moro, a disgraced Blackcoat with nothing but vengeance and justice in her sights. The novella manages to pack a lot of action into its relatively short word count and the character driven story is one that is not to be missed. 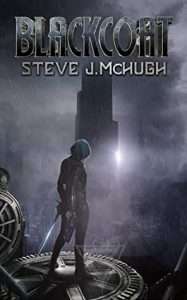 Blackcoat is told through the perspective of Celine Moro. Framed for treason against the Union, Moro begins the tale inside a dark cell sustained only by her ever-growing anger at the events that had led her to the grim abode. Trained to be part of the elite justice force named Blackcoats, Moro uses her skills and knowledge of the dark, gritty, corrupt world around her to break out of her cell and carve her way through the people who put her there in the first place. Celine Moro is a determined badass heroine in the mould of Monza Murcatto from Joe Abercrombie’s Best Served Cold. Like Monza, Celine Moro has reached the stage in her existence where she does not give a shit about anything but her desire to get the revenge she feels she deserves. She wants to shine a blinding light on the corruption that has choked her world and is willing to do anything it takes to get what she wants. McHugh writes Moro so well. The other characters interacting with the ex-Blackcoat show small signs of respect or intimidation that give the readers an understanding of how deadly she can be – similar to the hints throughout the first John Wick film before Keanu Reeves unleashes the once retired hitman.

The dystopian setting in Blackcoat reminded me of the darker and bleaker areas seen in Blade Runner 2049 and Cyberpunk 2077. Plasma blades and other familiar tech is used throughout the story but McHugh keeps the focus on Moro and her target. The cyberpunk aesthetic is a world away from McHugh’s fantasy works but each chapter showcases the confidence McHugh has in writing in the world of Xolea. He amps up the danger for Moro with each passing chapter as she works her way through increasingly difficult barriers to her goal like a Streets of Rage game. The novella has elements of old detective novels as Moro is the disrespected and betrayed protagonist attempting to take down a powerful leader who doesn’t give a shit about the common people. McHugh’s love of Judge Dredd and Mega-City One shone through the novella as I pictured Moro stopping at nothing to end the corruption.

Blackcoat is a fast-paced novella that is the perfect gateway story for anyone looking to get into grim cyberpunk or sci-fi. The tight focus on Celine Moro and her bloody quest for justice is one that is easy for readers to get behind and follow. As I finished the Blackcoat, I was left hoping for more stories from this interesting and grim world that Steve McHugh has created.