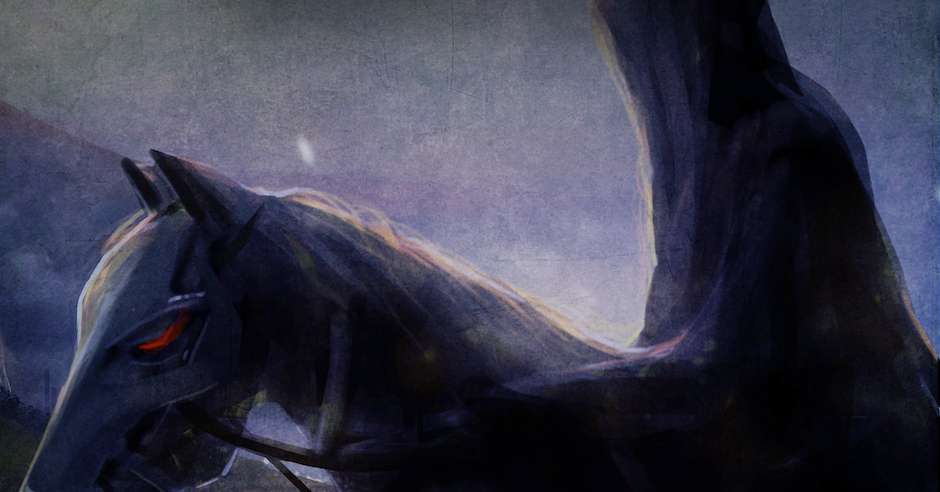 What happens when good knights go bad? When shining armor cracks, morals are cast aside, and sacred oaths are broken? Blackest Knights, edited by C.T. Phipps, is a collection of nineteen short stories that asks those very questions and explores the notion of flawed, fallen, and fascinatingly complex warriors.  When I heard this book was coming out, I couldn’t wait to get my gauntlets on a copy. 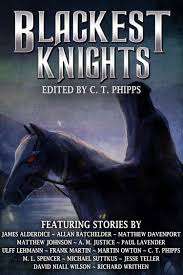 While many of these stories feature a literal black knight as their protagonist or antagonist, others deconstruct the archetype and portray its traits in less conventional ways. The anthology is predominantly fantasy and urban fantasy, and the tales within run the gamut from Locke-Lamora-style heists to mysteries and revenge stories. Like any other anthology, sixteen authors produce sixteen very different styles of work, and not everything will be to everyone’s liking. While there were a few stories that didn’t work for me, I felt this collection featured far more hits than misses.

As a whole, this collection isn’t as grim or dark as the title and cover art led me to believe it would be. The grimdark stories it does contain, however, are some of its best. Lehmann’s “Structural Engineer,” Spencer’s “Red,” and Johnson’s “Death Becomes Him,” are all standouts, and any of them would feel right at home in an issue of GdM. Furthermore, many of the other stories in this collection feature darker elements, less-than-heroic protagonists, and a level of moral ambiguity that will appeal to lovers of all things grim and gritty. While I wouldn’t group this with predominantly grimdark anthologies like Abercrombie’s Sharp Ends or Martin’s Blackguards, this book does contain more than a few tales that fans of the genre are likely to enjoy.

Although this is predominantly the work of indie authors, the finished product is professional, well-formatted, and nearly free of typos, all without the benefit of a big-name publisher’s team of editors. As a whole, I would give this anthology 4/5 stars and recommend it to anyone keen to take a look beneath the blackened chainmail and experience the darker side of chivalry.

On an individual level, here are my thoughts on each story briefly summarized.

If You Seek for El Dorado by David Niall Wilson

A multiverse-traveling Edgar Allan Poe encounters a deadly struggle between a weary knight and a nightmarish beast. While I loved the concept of Poe journeying the cosmos, the brevity of the plot made this feel a little more like a vignette or a teaser for a longer work. 3.5/5

Jane Versus the Black Knight by C.T. Phipps

Jane Doe, a weredeer in small town Michigan, takes a job helping a vampiric archeologist find the lost sword of Charlemagne. Fun, lighthearted urban fantasy (albeit a little on the shallower side) chock-full of puns with an interesting twist on medieval history. 3.5/5

Gift of the Gaze by James Alderdice

When her family is taken hostage, Lysandra, queen of thieves, is coerced into stealing a dangerous relic. While some characters came off a bit flat, the story was an overall enjoyable fantasy heist with a conceptually intriguing artifact for the prize.  3.5/5

When a bard sings a forbidden song, a legion of Imperial soldiers come to put Tash’s village to the sword. The magical elements of the story felt a little incongruous without background information to explain or foreshadow them. However, the strong prose, sanguine aesthetic, and violently cathartic conclusion won me over. 4/5

The Black Bastle by Paul Lavender

A tale told from two perspectives. The first follows Beatrice and Meltress (a combat-trained royal and her faithful battle mage respectively) as they pursue a poacher, while the second POV centers on their quarry, a deserter named Corvey. While there were no big surprises or fresh fantasy concepts, the lively action combined with Mel and Bea’s fun dynamic and natural chemistry still made for an enjoyable read. 3.5/5

The Structural Engineer by Ulff Lehmann

Thyrn is an elven lawman with a violent streak from Tolkien’s darkest nightmares, and he’s tasked with enforcing the ancient Rule of Consequence by any means necessary. This firsthand account of a particularly brutal verdict is quality grimdark with a strong narrative voice, innovative worldbuilding, and a stiletto-twist ending. 5/5

The Weight of Bliss by A.M. Justice

Moralen, a once-proud Healer, lives a half-life as drug-addicted husk of his former self after the death of his lover. While he isn’t a fallen knight in a literal sense, he struggles with his lost honor and the oaths he took as a Healer. The plot on this one ambled a bit, but I thought it was still an interesting and emotionally rich character study. 3.5/5

Warrick, a weary immortal with a less than linear existence in time and space, attempts to help the haggard remnants of a mortal army escape the living dead and a magical cataclysm. Although some worldbuilding elements left me confused, a strong opening, suspenseful pacing, and a clever chronological twist made this a page-turner. 4/5

The King and the Witch by Frank Martin

When the titular king’s bride-to-be vanishes on their wedding night, he braves the lair of the dreaded Black Witch to get her back. This story had the feel of a modern fairytale. But, the action sequences didn’t quite flow for me, and I felt the twist was a little too telegraphed to be truly surprising. 2/5

He Ain’t Heavy; He’s My Brother by Allan Batchelder

A tale of revenge and sorcerous sibling rivalry taken to the extreme. Enjoyable plot, pacing, and magic, but the closing line seemed out of place and made this feel more like the prologue to a novel-length work rather than a standalone short. 3.5/5

The Mist Beyond the Circle by Martin Owton</stro