The second in a series of anthologies by C.T. Phipps after Blackest Knights, Blackest Spells collects the fantasy works of a range of authors under the theme of dark magic. There were a few names in there I recognised and as somebody who loves short stories, I had high hopes for this book. Unfortunately, except for a few glimmers of sunshine, I didn’t enjoy this one. 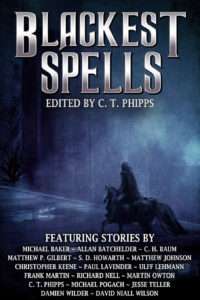 The editor has always seen the transformation of magic from a terrifying force linked to the gods into a practical tool for personal use / gain. The theme of this anthology is his way of putting the terror and the unknown back into fantasy. This was an excellent opening to whet the appetite. At this point, I was really excited to get stuck in.

However, there were stories I felt weren’t on theme for the anthology, some that just needed to be sent back to the author (“thank you for your efforts, can you please try again”), and some that were almost there and just needed a bit of the old red pen to get over the line (telling and not showing, abrupt or weird endings, lack of urgency, ridiculously unnecessary female nudity–the usual things). I DNF’d a few where I just could. not. do. it. And as somebody who has read a lot of slush, I feel I have a pretty high tolerance for a story before I DNF.

In addition, something I thought was quite an oddity in this day and age of anthology creation, was that unless I am mistaken, this is an all-male line up of authors. I know from our own slush pile how hard it is to find the right stories for publications, and I don’t know what trials and tribulations the editor went through, but that stood out to me.

In short, I can’t recommend this anthology as a book as a large portion of the stories sat comfortably in the sub-3 scoring region, but I can recommend you read some of the stories.

Reviews of the stories I liked in Blackest Spells

All harshness aside, there were a few stories I was really in to and are worth you checking out. What is Stolen and What is Lost by Allan Batchelder, City of God by Richard Nell, and The Witch Queen by Michael Pogach were my favourites.

The Witch Queen by Michael Pogach

A young princess is born into a kingdom that has long known peace. The Witch Queen arrives and brings war. And then along comes a spider… what a fun story told in a fairy tale voice. Really easy to read, hits the theme right on the nose, a predictable but grim twist at the end. Solid storytelling 4/5.

Twelve members of the Silent Men army of 20,000 are left after the Singers drowned them all. Hyman doesn’t want revenge he just wants to get back to his wife and child. A decent read with plenty of grim and grit that could have used some polishing to sharpen it up. 3/5

City of God by Richard Nell

Fulvi, an ex soldier with no past illusions of glory, writes his old captain who has asked him to find his daughter. Written in a daily report Bram Stoker Dracula style, this is an excellent read with an impactful ending. Brilliantly written. 4/5

Lucian, The Man Who Fights Without a Knife, is hunting a wily old soothsayer who knows everything he’s going to do before he does. Can he stop him before even more bodies pile up from the Soothsayer’s grisly experiments? This is a nice storyline and a fun read. There is a fair bit of telling that if turned to showing would have made this story a much better experience. Again, there’s a naked girl for some bloody reason. Nice twist at the end to wrap it up. 3/5

What is Stolen and What is Lost by Allan Batchelder

Cyrin the Shaper wants to see Mellie safely grown and married. Only, he’s not going to live long enough to do it, unless he can discover the secret to elongate his life.

Well, that did not end up going in the direction I thought it would! A wicked tale of good intentions and questionable decisions gone wrong. Well written; great fun. 4/5

This to me reads more like horror than something on theme, but perhaps it’s just a really, really dark take on the theme. A victim of horrible magic versus a purveyor of the art. It’s an interesting tale, told in an engaging first person voice, and I kinda liked it. 3.5/5