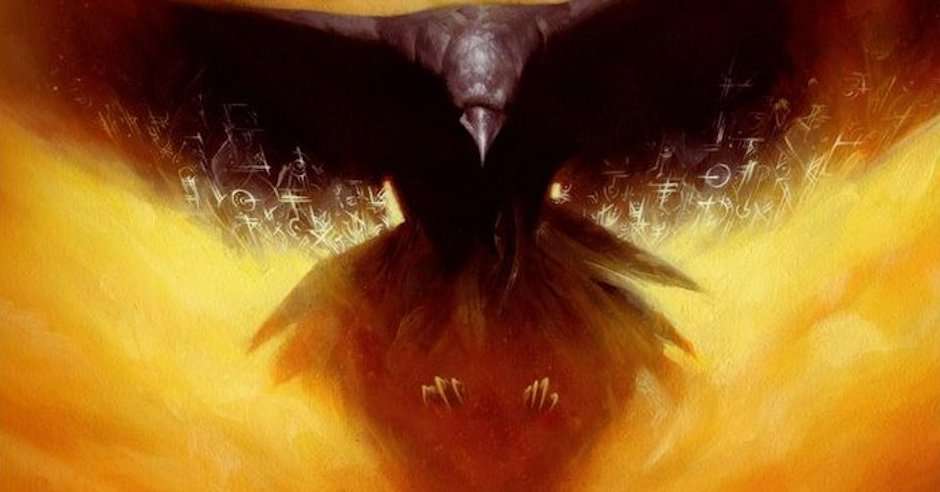 Blackwing was one of the best grimdark debuts of last year. With the sequel Ravencry on the horizon, there is no better time to look back at the first book in Ed McDonald’s Raven’s Mark series. 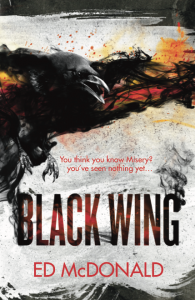 After two centuries of battle, the Republic and the Dhojaran Empire have ground to a stalemate. In their last cataclysmic confrontation, the Republic only survived through the activation of a terrible war machine, Nall’s Engine. Harnessing the magical light-spinning magic of gifted individuals known as Spinners, the Engine decimated the invading Dhojaran hordes and created a magic contaminated wasteland christened the Misery. Now, the Republic keeps an uneasy watch northwards, where beyond the Misery the Dhojaran Empire’s overseers, the immortal and sadistic Deep Kings, are only held in check by the threat of the Engine’s reactivation.

However, not only is the reliability of the Engine increasingly uncertain, the hermetic clade of wizards responsible for its construction have isolated themselves one by one from the Republic. Only two of the original clade, nicknamed the Nameless, are known to still be active: the Lady of the Waves and Crowfoot.

Ryhalt Galharrow is a Blackwing, one of Crowfoot’s feared enforcers. Crowfoot’s favour grants him a status not unlike a member of the secret police. The State troops fear and hate him, because as Ryhalt states, everyone has something to hide. Even royalty and the military high command are to some extent answerable to him.

Crowfoot allows Ryhalt a loose leash in conducting his investigations. Ryhalt is fine with minimal oversight, because when Crowfoot conveys his messages, he does so by animating the crow tattoo on Ryhalt’s arm and literally causing it to burst free of his flesh as an avatar. It’s painful and it’s messy.

So when Crowfoot contacts him midway through a job in the Misery and orders he detour to the military outpost Station 12, Ryhalt knows there’s serious trouble brewing. Further instruction is conspicuous by its absence. Ryhalt is only instructed to ensure the survival of a unnamed woman. Ryhalt duly takes his motley crew of misfits to Station 12, where, shortly after his arrival, the Deep King’s minions launch an unprecedented attack.

In the slaughter, Ryhalt finds himself reunited with the subject of Crowfoot’s message, an old flame from his youth, the Spinner Ezabeth Tanza. After the battle, they return to the Republic, where she embroils him in a far-reaching conspiracy involving Nall’s Engine. It seems the Engine is failing, and if it is, then there will be nothing to prevent the Deep Kings invading.

Where Ed McDonald’s writing really shines is in the turns of phrase. Ryhalt’s metaphors, quips, and analogies are cutting and incisive.

Scraping a living out of other men’s blood wasn’t much of a life, but it was what I had, and the taverns never turn you away.

Pithy insights like the above are what define Ryhalt’s voice, a ruthlessly sardonic worldview that you can’t help but grow fond of. His associates are also suitably glib and roguish characters: Nenn, a nose-less mercenary, as quick with her sword as she is to rebuke Ryhalt; and Tnota, who in between bedding any willing man in town, has the skill to navigate in the shifting magical wastes of the Misery.

The Misery is where McDonald really allows his freak flag to fly. The Misery disavows any natural laws and harbours all manner of weird monsters and thaumatological insanity. At one point Ryhalt spits into the giant crater left by Cold, a murdered Nameless. The spittle summarily grows legs and runs off. Far worse, though, are the murderous “gillings” and the telepathic “darlings”. Lots of monsters, lots of action, and lots of ill-mannered humour. What’s not to like?

McDonald also gets his sword fighting right. His knowledge of realistic technique showcases itself at regular intervals without becoming overbearing. He’ll refer to “hanging guards” and “the bind” and other nomenclature but without losing a reader unfamiliar with the terms. Suffice to say that it’s nice to read a fantasy novel that is slightly more grounded in its one-on-one combat scenes. After all, grimdark is all about gritty realism.

Blackwing sets a high bar for future instalments in the series. Fortunately, the ending, while self-contained, leaves plenty of avenues open. My advice is to pick up a copy and get ready for Ravencry.

[…] Blackwing was a hell of a lot of grimdark fun, so it’s an understatement to say I was keen to get my hands on Ravencry, the second instalment in the Raven’s Mark series. Ravencry is set four years after the end of Blackwing and continues the story of Captain Ryhalt Galharrow, the hardbitten enforcer of the wizard Crowfoot. […]